To slow flow of grad transfers, NCAA could constrain schools 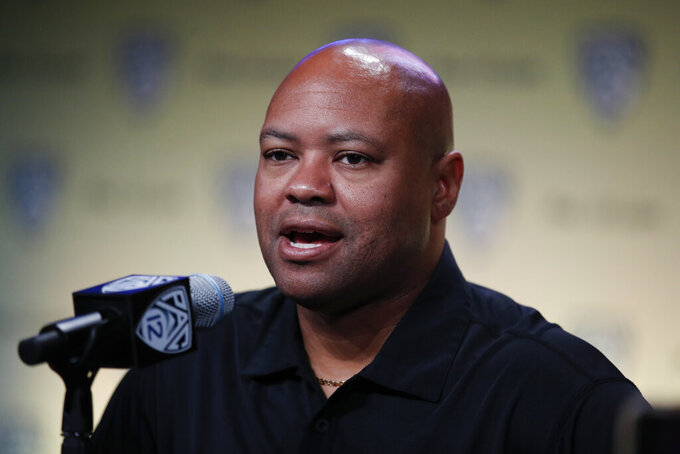 FILE - In this July 25, 2018, file photo, Stanford head coach David Shaw speaks at the Pac-12 Conference NCAA college football Media Day in Los Angeles. The NCAA’s Division I Council meets this week in Indianapolis, and it is expected to vote by Friday, April 19, 2019, on an amendment to the rules regarding graduate transfers and financial aid. If passed the proposal would require a grad transfer to count against a team’s scholarship total for two years no matter how much eligibility the player has remaining. Shaw, whose program routinely operates below the major-college maximum of 85 scholarship players, said he would not hesitate to bring in a star-level player as a grad transfer even if it meant having an vacant scholarship the next season. But teams could be less inclined to take that hit with a lesser player. (AP Photo/Jae C. Hong, File)

Football and basketball coaches may be less likely to add graduate transfers to their teams under a change being considered by the NCAA.

The NCAA Division I Council is expected to vote by Friday on an amendment that would require a grad transfer to count against a team's scholarship total for two years, no matter how much eligibility the player has left when they arrive. An exception would be made for athletes who complete graduate degree requirements before the start of the second year.

The proposal targets what critics say is virtual free agency in big-time college athletics. Current rules allow athletes who have earned an undergraduate degree to transfer to another school without sitting out a season, as is usually required by the NCAA of undergraduates.

Grad transfers can be a quick fix for coaches trying to plug holes on a roster and the freedom has been a boon to athletes looking for more playing time. But some administrators say the rule has drifted away from its original intent and graduate transfers are rarely completing those advanced degrees.

"The so-called graduate degree is really not the aspiration," Big 12 Commissioner Bob Bowlsby said. "The aspiration is to be featured, and usually featured at a higher level."

Changing the rule could slow the flow of grad transfers by making coaches more reluctant to take on players with only with one year of eligibility remaining.

"Roster management is such a critical component of every collegiate coach and then to say that you're going to burn a scholarship for another year afterward, where an individual is not even playing, that's obviously a pretty high price," said Todd Berry, the executive director of the American Football Coaches Association.

High-profile quarterbacks, such as former Alabama star Jalen Hurts who is now at Oklahoma, often garner headlines when they transfer as grad students. Still, the majority of football players taking this route are far less accomplished.

Stanford coach David Shaw, whose program routinely operates below the major-college maximum of 85 scholarship players, said he would not hesitate to bring in a star-level player as a grad transfer even if it meant having an vacant scholarship the next season. But teams could be less inclined to take that hit with a lesser player.

"I have a tough time justifying putting constraints on someone who would accept a grad transfer because we're talking about some of the best class of young people," Shaw said. "These guys have graduated. They have done what they needed to do."

In men's basketball, where the scholarship limit is 13 per team, graduate transfers have become even more prevalent.

"(The proposed rule change) may help programs like us in the Big Sky or the Big West, the WAC, where we're investing four years in these young men and sometimes you're losing out on the best year they can give you, in terms of the fifth year after the redshirt year," Northern Arizona coach Jack Murphy said. "A lot of people say something has to change. I don't know if something has to change, but it would definitely make programs think long and hard if they're going commit two years of resources for only one year."

The proposed amendment comes during a time of sweeping reform of NCAA transfer rules.

Athletes are no longer required to seek permission from their current school to be contacted by other schools when they decide to transfer. They can simply notify their schools of intent to transfer and have their names placed in an NCAA database. Once listed in the so-called transfer portal an athlete can be recruited by any school.

The NCAA also tweaked its waiver policy to give more undergraduates a chance to become immediately eligible to compete after transferring. Ohio State quarterback Justin Fields and Miami quarterback Tate Martell are among those who have received a waiver to play in 2019 after transferring following the 2018 season.

The latest proposal was crafted by the Division I Council's transfer working group, which also came up with the notification model. All 32 Division I conferences are represented on the council.

Bowlsby, who is not on the council, said a majority of the 10 athletic directors in the Big 12 were against the proposal. Mid-American Conference Commissioner Jon Steinbrecher, who represents the MAC on the council and was part of the working group, said his league is for it.

Steinbrecher also said the proposal had strong support coming out of the working group, which had representation from throughout Division I.

"If you don't like the idea of free-flowing grad transfers, which is essentially what we have right now," Steinbrecher said, "I'm not sure why you would be opposed to what's being proposed."