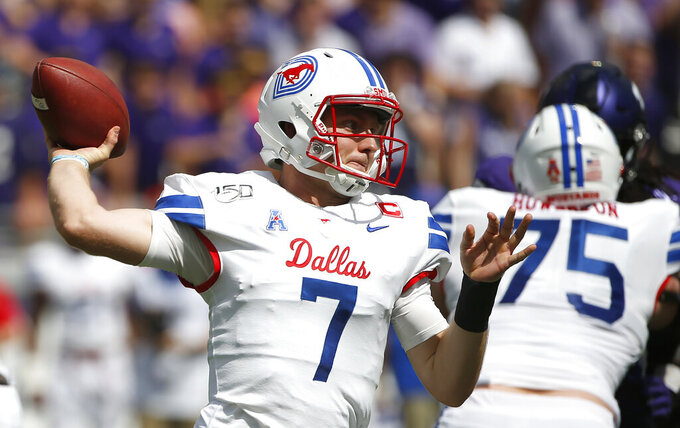 SMU quarterback Shane Buechele (7) throws against TCU during the first half of an NCAA college football game Saturday, Sept. 21, 2019, in Fort Worth, Texas. (AP Photo/Ron Jenkins)

The former Texas starting quarterback and the linebacker who played for Auburn in the SEC championship game two seasons ago will now be part of SMU’s first game as a ranked team in 33 years. The No. 24 Mustangs (5-0, 1-0 American) are home against Tulsa on Saturday night.

“There’s been some rough seasons around here through the years. There’s also been some good ones,” second-year coach Sonny Dykes said. “Winning helps, but you’ve got to win consistently, and I think sometimes it may be a little slower process than people want it to be.”

The Mustangs moved into the AP poll this week for the first time since October 1986, which was just before crippling sanctions that kept them from even fielding a team in 1987 and 1988. The NCAA’s so-called death penalty set the program back for decades.

In the 30 full seasons completed since resuming play, SMU had 23 losing records and finished .500 twice. Three of the five winning seasons came during a span of four consecutive bowl appearances (2009-12) in the middle of June Jones’ six-plus seasons as coach.

With a chance to get bowl eligible in Dykes’ first season, the Mustangs instead finished 5-7 after losing their finale 27-24 at Tulsa last November.

“It left a bad taste in everybody’s mouths,” Dykes said.

With a win over the Golden Hurricane (2-2, 0-0), SMU would be undefeated halfway through the regular season. The last time the Mustangs got to 6-0 was 1982, when they went on to an unbeaten season (11-0-1) with running backs Eric Dickerson and Craig James.

SMU’s roster has changed drastically since that last meeting with Tulsa. Dykes said there are 65 new players, including scholarship freshmen, walk-ons and transfers. Buechele and McBryde are among seven graduate transfers, four them starters, playing this season.

Buechele, who has another full season of eligibility in 2020, is the American Athletic Conference’s leading passer at 277 yards per game. His 10 touchdown passes include multiple TDs each of the last four games.

McBryde and safety Patrick Nelson, a second-year Mustang after transferring from Illinois, are tied for the team lead with 29 tackles. Nelson leads the Mustangs with 5½ sacks.

When the Mustangs last played at home as a ranked team on Oct. 18, 1986, they were No. 20 _ the AP poll then was only 20 teams _ in a 10-3 win over Houston. They moved up two spots the next week before a Southwest Conference loss at Texas knocked them out of the poll.

At that time, Dykes was a high school student in Lubbock, where his father Spike Dykes was still Texas Tech’s defensive coordinator only a few weeks before becoming the Red Raiders head coach for 13 seasons.

“When you think back to those early days at SMU, and the type of players they were having, the seasons they were having, it’s always been a very prominent school,” Montgomery said. “They’ve had some years that they’ve had to obviously try to work their way back after the death penalty, and I think they’ve obviously overcome that now.”

Tulsa junior RB Shamari Brooks was held to zero yards on six carries in the season opener at Michigan State. He has averaged 104.7 yards and run for four touchdowns the past three games. He has at least 100 yards rushing in 10 of his 24 career games.

SIMILAR D, NOT AS MUCH O

The Mustangs had 10 sacks last week in their 48-21 win at USF, with 10 different players getting involved in doubling the previous school record. Their 25 sacks this season lead the nation. On the other side, SMU has allowed only four QB sacks in five games _ best in the AAC and top 10 nationally.