Snell runs wild, No. 16 Kentucky holds off No. 13 Penn State 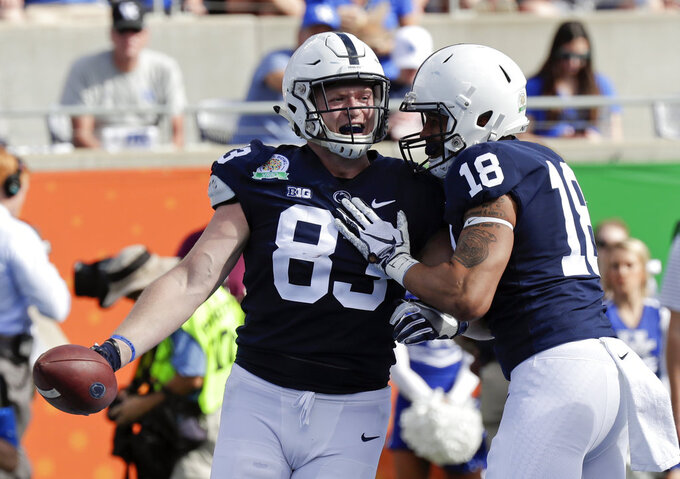 ORLANDO, Fla. (AP) — Winning 10 games, beating Penn State on New Year's Day, and finishing in the Top 20 is no small deal for the Kentucky Wildcats.

So when Mark Stoops took a seat on the podium flanked by linebacker Josh Allen and running back Benny Snell Jr. after Tuesday's 27-24 victory in the Citrus Bowl, the coach understandably was beyond excited.

Snell ran for 144 yards and two touchdowns to become Kentucky's career rushing leader and helped the 16th-ranked Wildcats end their best season in more than four decades on a winning note.

"There's no question that these guys changed the culture," Stoops said. "They've done so much and meant so much to this team and this program that it was very important to finish, to collect the trophy, win 10 games and win a game on New Year's Day. Believe me, we had a great belief that we didn't have to do anything special (to win), just be us."

Snell scored on runs of 2 and 12 yards in the second half, then carried for a couple of crucial first downs to help Kentucky (10-3) run out the clock after Penn State's Trace McSorley trimmed a 27-7 deficit to three points despite playing with a foot injury.

McSorley threw for 246 yards and two touchdowns, and the Nittany Lions' career passing and wins leader also rushed for a team-high 75 yards and one TD.

"The same thing that troubled us throughout the season troubled us here again today. Dropped balls, missed opportunities. That's really kind of the story of the game," said Penn State coach James Franklin, whose team started slowly on offense, missed one field goal and had another blocked.

Lynn Bowden Jr. scored on a 58-yard punt return for Kentucky. Allen, the Southeastern Conference defensive player of the year, had three of the Wildcats' six sacks.

"The three guys we knew we needed to stop were Bowden, Snell and Allen. All three of them showed up today," Franklin said.

Penn State (9-4) trailed 27-7 entering the fourth quarter, but McSorley's wasn't finished. His 1-yard TD run capped a 75-yard drive, and he followed with an 18-yard TD pass to Pat Friermuth to cut Kentucky's lead to six.

The Nittany Lions marched to the Kentucky 14 on their next possession and pulled within 27-24 with 4:12 left.

Thanks to Snell, a junior who already has declared for the NFL draft, McSorley didn't get the ball back until just one second was left on the clock.

"We don't typically get into specifics. ... Obviously Trace was experiencing some discomfort. The doctors felt like he could go, but it really just came down to Trace on how Trace felt," Franklin said.

McSorley, who was to undergo further evaluation, said he hadn't received "definitive information" on whether his foot was broken.

Kentucky: Facing a tradition-rich opponent in a New Year's bowl was significant for the Wildcats, who made the most of the opportunity. Along with the three sacks, Allen blocked a field goal to key a strong defensive effort, while the offense shrugged off a slow start to help the Wildcats pull away in the second half.

Penn State: The Nittany Lions fell short of their goal to finish with 10 wins in three consecutive seasons for the first time since 1980-82. Three of their four losses were by a total of eight points.

Kentucky: Wildcats look to build on success they've had under coach Mark Stoops, who has transformed them into a Top 25 team. Their 5-3 record in SEC play represented their first winning mark in the league in 41 years, spawning heightened expectations for 2019.