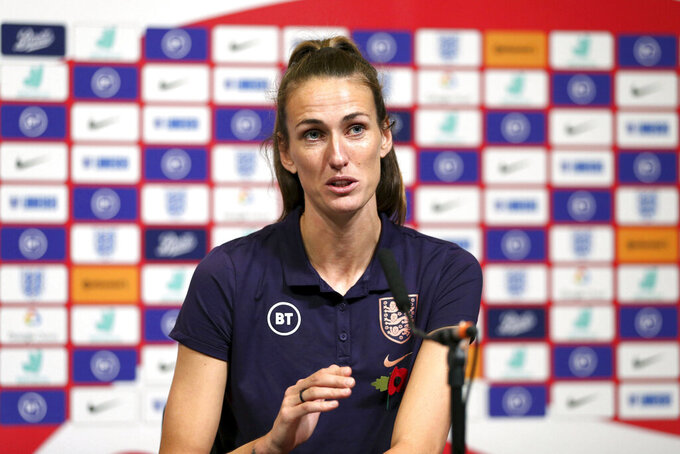 England's Jill Scott speaks during the press conference at Wembley Stadium, London, Friday Nov. 8, 2019. Returning to play at Wembley Stadium for a third time is a chance for Jill Scott to reflect. Scott using another visit by Germany on Saturday to bask in the advances in women’s soccer in England. (Steven Paston/PA via AP)

LONDON (AP) — Returning to play at Wembley Stadium for a third time is a chance for England midfielder Jill Scott to reflect.

But not so much on her experience five years ago against Germany.

"I remember coming on," Scott said, "and missing a sitter."

The 32-year-old Scott will instead use the return visit by Germany on Saturday to bask in the advances in women's soccer in England.

The crowd for the 3-0 loss to Germany in 2014 was an English team record 45,619. This time, it's a sellout at English soccer's national stadium with 86,619 tickets issued for the friendly game.

Should everyone who bought a ticket turn up, the crowd will easily exceed the 70,584 who watched Scott in a British team that beat Brazil at Wembley during the 2012 London Olympics. It should also surpass the 80,023 at that Olympic final between the United States and Japan.

"At the time we were getting about 200 for our club games," recalled Manchester City's Scott, who was playing for Everton in 2012. "We were so nervous because you'd never seen so many people before. But I think for the Olympics, a lot of people did just buy tickets to say they were being part of the Olympics. It wasn't necessarily just for women's football.

"So to think everybody's gone out there (to buy tickets for Saturday) and wants to support this team is just a massive turning point for the game."

Not just in England.

Saturday could see the biggest crowd for women's soccer since the 1999 World Cup final when 90,185 watched the United States beat China at the Rose Bowl in Pasadena, California.

"It shows we are getting respected for the work we've done day in and day out," England defender Gemma Bonner said. "It's been a long road to get to this occasion, but one we should embrace, enjoy."

England is using the occasion not just to celebrate the current side, which reached the World Cup semifinals in July, but also trailblazing Lionesses who have been part of the journey since their first official game in 1972.

"Hopefully," striker Ellen White said, "this is the start of us selling out massive stadiums, of people supporting us and wanting to come and watch women's football."

A record Women's Super League crowd of 31,213 watched the Manchester derby between City and United in September, and more than 24,000 people have since attended games at Chelsea and West Ham — all played in stadiums usually used by the men's teams.

Playing Germany is a chance to inspire a new generation of players, just as Ellie Roebuck was stirred as a 15-year-old at Wembley in 2015 at a time before the WSL became fully professionally.

"I was very unsure of what was next in women's football and obviously now being able to be professional and do it as a job is unbelievable," the England goalkeeper said. "That was definitely kind of a mentality switch."

There is much more at stake for England than just setting attendance records.

The loss to the U.S. in the World Cup semifinals was the start of a five-match winless run that only ended with a 1-0 victory over Portugal last month as scrutiny of manager Phil Neville's tactics increased.

"Coming off the back of the World Cup where we all reached a massive emotional high, we have probably all found it a little bit difficult to get back up to that high mentally and physically," Neville said. "But this is the type of game where there are no excuses."

While the Germans were eliminated in the quarterfinals in France, they are second in the FIFA rankings while England is fifth. England does not have a competitive game until the European Championship in 2021 due to the country hosting the tournament that ends at Wembley.

"When you get to games like this, my experience tells me you have to forget the sideshow and circus that is going on around this occasion ... we have to be 100% focused on producing a good performance and winning the game," Neville said.

"It's the biggest game the England women's team have ever had in terms of the size of the game and I think emotionally, physically and tactically we need to be at our very best."