Some in-state rivalries left off of SEC's Thanksgiving menu 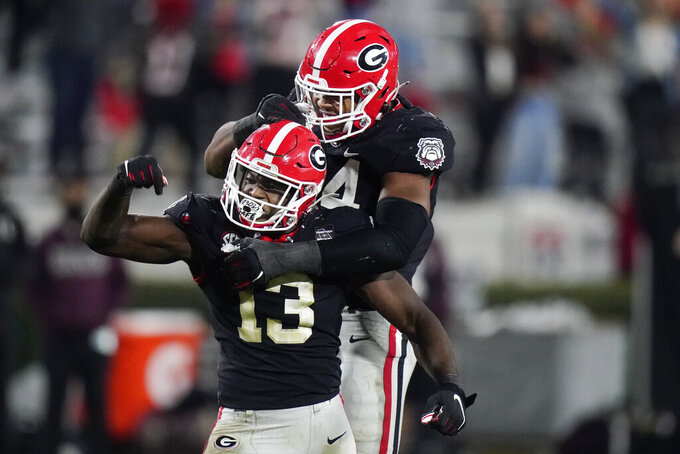 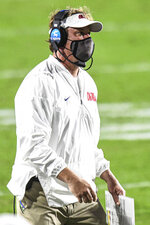 The Thanksgiving menu of in-state rivalry games is a little lighter this year around the Southeastern Conference.

Sure, top-ranked Alabama and No. 22 Auburn will duke it out in the Iron Bowl, while Mississippi State and Mississippi resume the Battle for the Golden Egg in Oxford. But those offerings will have to do this Saturday with four other turf wars against Atlantic Coast Conference rivals having been put on pause by the SEC’s league-only schedule because of the coronavirus pandemic.

The conference’s announcement this summer halted several series between SEC and ACC counterparts, the longest of which was the 111 consecutive meetings between South Carolina and Clemson. Instead of a chance to derail the No. 4 Tigers’ playoff hopes, the Gamecocks and interim coach Mike Bobo instead will face No. 22 Georgia — which won’t meet ACC rival Georgia Tech for the first time since 1924 in the game billed as “Clean, Old-Fashioned Hate.”

“You grow up on the game after Thanksgiving, all you’re ready to watch is Clemson-South Carolina,” said Gamecocks defensive back Jaylan Foster, who grew up amid the rivalry closer to Clemson in Duncan, South Carolina.

“It’s very strange, but we can’t do anything about that. We’ve got to worry about the opponent in front of us, and that’s Georgia.”

The Sunshine Showdown between No. 6 Florida and Florida State, which started in 1958, is also on hold. Same for the Governor's Cup matchup between Kentucky and Louisville; the Bluegrass rivalry that resumed in 1994 after a 70-year hiatus.

With those breaks went a chance for team and SEC bragging rights after the conference went 3-1 last Thanksgiving weekend against the ACC. That leaves the weekend looking much like, well, September rather than one with a buffet of grudge matches.

“It’s such a weird deal right now,” said Florida coach Dan Mullen, whose East-leading team will host Kentucky in The Swamp. “It certainly doesn’t feel like Thanksgiving week because we’re in the middle of the season. I think that just makes it have such a different feel for it all this week.

“That’s always such a big game for our state. Usually when you see those games on this weekend, families are getting (together) and celebrating the holidays. This year, you’re not really supposed to get with your family and you’re missing out on your big football games to watch.”

While the ACC wanted to allow its four schools to preserve those in-state rivalries as part of their 11-game schedule, those contests were canceled as the SEC added two extra league contests in its reworked slate.

The 10-game docket included a contingency date of Dec. 12 as an extra week, but the season will likely extend to Dec. 19 for some schools to make up games postponed by COVID outbreaks at several programs. This week’s postponement of Saturday’s SEC rivalry game between Tennessee and host Vanderbilt, so the Commodores can make up an earlier meeting against Missouri, demonstrates this season’s uncertainty and the schedule’s fluidity.

“There hasn’t been time to really figure out when that’s going to happen or what’s going to happen,” Vanderbilt guard Drew Birchmeier said. “So, (we) just play who we’re told to play. It’s a great rivalry and I love playing them every year. I guess we’ll just have to see what happens.”

As much as SEC teams wanted those out-of-conference matchups, the chance that they could have become scheduling casualties this fall puts the league-only slate into perspective. Just having an opponent has mattered more than who it is, especially with the dwindling number of available Saturdays to play.

All of which makes Auburn coach Gus Malzahn appreciative of his team's rivalry game.

“There’s definitely no certainties,” he said. “It’s been a bizarre year in a lot of different ways. The good thing is, I guess we’re playing this thing the same week as we normally do. That’s probably about the only thing normal as far as everything leading up to this.”

This weekend’s storylines are certainly intriguing.

Alabama coach Nick Saban will miss the Iron Bowl after testing positive for COVID-19 for a second time this season.

So Alabama will enter the 85th meeting with Auburn without their head coach but atop the initial College Football Playoff rankings and seeking another SEC title. The visiting Tigers are 7-5 in Tuscaloosa and aiming for a second consecutive series win that could damage the Crimson Tide’s quest.

While Saban won't be on the sideline, he is well aware of the game’s meaning, magnitude and audience.

“All eyes here are looking forward to the Iron Bowl, which is one of the great rivalries, I think, in college football,” he said. “It certainly means a lot to a lot of people in this state and all over the country.”

There’s also something to watch one state over in the Egg Bowl, where first-year coaches Mike Leach (MSU) and Lane Kiffin (Ole Miss) seek to finish the stretch run strong. Saturday will mark the first time since 2016 the game won’t be played on Thanksgiving, but interest in the Magnolia State remains high in an unusual SEC season that has left fewer rivalries to digest.

“There’s a temptation to elevate games and you’re only going to play one game a week,” Leach said. “So, your first focus and effort needs to be on that one game.

“But by the same token, you know, this is a game that’s memorable. It’s very important to our fans. Even though they can’t be in the stands as much as usual, people will be watching and will definitely take an interest in this game and they’ll talk about it for a year.”