Something new for Georgia: Road opener against SEC rival 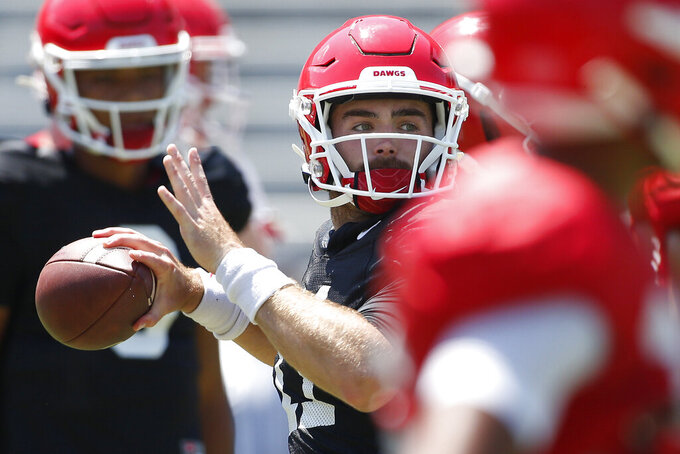 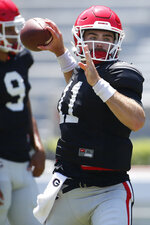 ATHENS, Ga. (AP) — Well, this is something different.

For the first time since 1995, No. 3 Georgia will begin the season against a Southeastern Conference foe.

And when the Bulldogs hit the road to face Vanderbilt on Saturday night, it will mark only the fourth time in the last quarter-century that they have kicked things off beyond the state line.

In recent years, Georgia has routinely opened against a non-Power 5 opponent within the friendly confines of Sanford Stadium, though there have been a few exceptions such as Clemson, North Carolina and Oklahoma State.

Clashing with an SEC team right off the bat — even a perennial back marker such as Vanderbilt — adds a greater sense of urgency.

"We have a lot of guys who haven't had their feet in the fire," coach Kirby Smart said. "We try to make scrimmages as tense as possible to create that feeling, but ultimately we will find out a lot about our team."

Georgia faces another round of soaring expectations after losing in the national championship game two seasons ago and coming up just short of making the College Football Playoff last year.

With two of the nation's top players in quarterback Jake Fromm and running back D'Andre Swift, the Bulldogs are expected to again be in the thick of the race for No. 1.

They certainly can't afford to slip up against Vanderbilt, which has made bowl appearances two of the last three years under coach Derek Mason but hasn't finished with a winning record since 2013.

Georgia has dominated the series, holding a 57-20-2 edge, though Vanderbilt has won two of the last six meetings — including a 17-16 upset in Athens during Smart's first season as coach. But the Bulldogs have romped to easy victories the last two years, winning by an average margin of nearly 30 points, and they are a three-touchdown favorite this time around.

No matter what happens in the opener, there is still a long season ahead.

"Win or lose, it is not going to define you," Smart said. "I do think the narrative (for the season) is set a lot of times off the first game, especially if it is a nationally-televised game and you are out there playing a quality conference opponent who we think is a really good program and a really good team."

The big drawback to opening on the road, according to Smart, is only being able to take a 70-man travel roster. Some of the younger guys won't get a chance to pick up valuable playing time, though there should be plenty of opportunities the next two weeks with home games against Murray State and Arkansas State.

"There are going to be some guys sitting at home that are really good football players for us," Smart said.

The biggest question mark for the Bulldogs is the receiving corps, which lost its top five pass-catchers from last season. The NFL draft claimed receivers Mecole Hardman, Riley Ridley and Terry Godwin, along with tight end Isaac Nauta. The group took another blow when junior receiver Jeremiah Holloman was kicked off the team over allegations that he punched and choked his girlfriend.

Tyler Simmons, a senior with just 14 catches in his career, ranks as the Bulldogs' top returner. Smart has yet to release a depth chart, so Fromm will likely be throwing to a large group of targets in the opener.

There is no question about the Georgia quarterback.

Fromm beat out previous starter Jacob Eason for the job as a freshman, and held off highly recruited Justin Fields for the No. 1 spot last season. Eason wound up transferring to Washington, while Fields moved on to Ohio State. Both will be starting for their new, nationally ranked schools on Saturday, which demonstrates just how highly regarded Fromm is in Athens.

"He believes in who he is," Smart said. "It's like having an extra coach on the field. His level of confidence continues to grow because you see him impart that on the younger players and on the offensive line, running backs and receivers. He leads. He is in a better spot than he's ever been in, just from the standpoint of having more experience. It has nothing to do about who is behind him — it has everything to do with who he is."