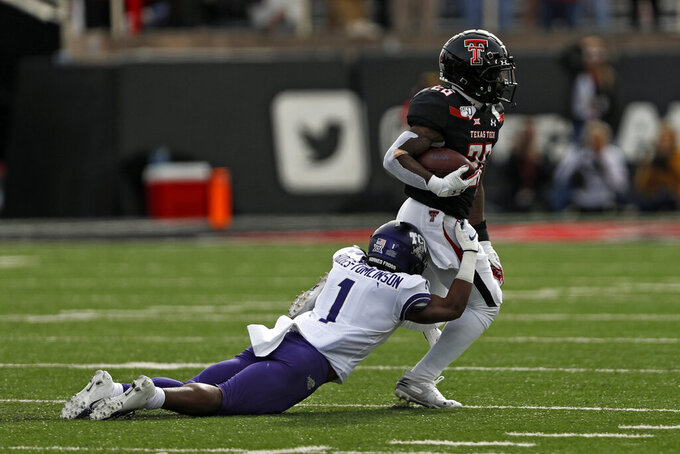 LUBBOCK, Texas (AP) — TCU’s seesaw win at Texas Tech on Saturday proved there’s no place like the road in this Big 12 rivalry, thanks in great measure to a fittingly uncharacteristic first quarter for both teams.

Jonathan Song’s fourth field goal, a 20-yarder with 5:38 to play, gave the Horned Frogs a 33-31 win in a battle of teams fighting to earn bowl eligibility. TCU needed the kick after squandering multiple 17-point leads in the first half.

“To win on the road, that’s what you’ve got to do,” coach Gary Patterson said.

He wasn’t as pleased with his team’s finish.

“The defense tried to screw it up,” Patterson said. “But we got the last two stops, and that’s what mattered.”

“Coach said we had to make a play,” Scott said. “So I just put my hand on the ball, and it came out.”

Song’s final field goal was the third lead change of the fourth quarter in a game that TCU led 24-3. He also hit from 36, 28 and 25 yards. His winning kick came after a 4-yard touchdown pass from Max Duggan to Jalen Reagor was called back because of a pick penalty.

Duggan passed for 323 yards and accounted for all three touchdowns. He threw touchdown passes of 55 yards to Reagor and 4 yards to Artayvious Lynn and ran for a 20-yard touchdown on the game’s first possession.

Tech’s Jett Duffey threw for 333 yards and four touchdowns: 70 and 32 yards to R.J. Turner, 33 yards to Erik Ezukanma and 26 yards to Dalton Rigdon.

Patterson said Tech frequently passed out of what previously this season were running formations.

The Red Raiders were unsuccessful on two 2-point tries beginning in the third quarter after Wolff missed a PAT in the second quarter.

“That’s one of the earliest times I’ve ever started going for two,” Texas Tech coach Matt Wells said, “but at that point, we weren’t stopping them on defense. I thought this thing was going to keep going like a tennis match.”

The Red Raiders rushed for a season-low 69 yards with Duffey running for 42. Running backs SaRodorick Thompson and Ta-Zhawn Henry combined for 27 yards on nine carries.

Tech running back Armand Shyne was lost for the season two weeks ago, and Wells said Thompson and Henry both played hurt.

Dalton was helped to the locker room in the third quarter on a tackle that resulted in a targeting ejection on Jeff Gladney. Tech’s Jordyn Brooks, the leading tackler in the FBS, left in the first quarter with an upper-body injury.

WHOSE CATCH IS IT ANYWAY?

Rigdon was awarded with the 26-yard TD catch after he and R.J. Turner came down with the ball together. Duffey wasn’t picky about who got the credit.

“I knew someone would come up with it,” Duffey said.

TCU was plus-2 in turnover margin after going minus-4 in its previous two games, losses to Oklahoma State and Baylor. . . Frogs receiver Taye Barber had career highs with eight catches and 137 yards. . . Tech played its second straight game without leading receiver T.J. Vasher (37 catches, 473 yards), on suspension for an unspecified violation of team rules.

TCU: The Frogs’ defense, which went into play ranked first in the Big 12, is 10 for 10 in holding opponents below their total offense average. Texas Tech went into the game averaging 478.6 yards and gained 402.

TCU will visit Oklahoma next Saturday.