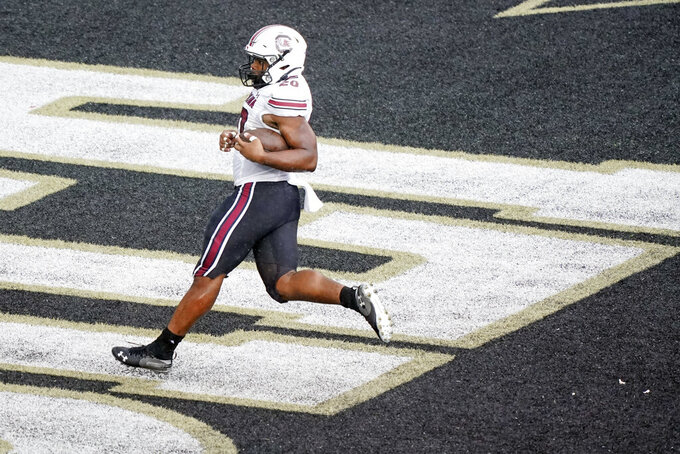 South Carolina running back Kevin Harris scores a touchdown on a 25-yard run against Vanderbilt in the second half of an NCAA college football game Saturday, Oct. 10, 2020, in Nashville, Tenn. (AP Photo/Mark Humphrey)

NASHVILLE, Tenn. (AP) — The South Carolina Gamecocks ran the ball so well on a rainy, sloppy day that quarterback Collin Hill would not have minded if he never threw the ball.

Hill ran for two touchdowns and Kevin Harris ran for two TDs and a career-high 171 yards as the South Carolina Gamecocks beat Vanderbilt 41-7 Saturday for their first victory of the season.

The Gamecocks (1-2, 1-2 SEC) won their 12th straight in this series by dominating Vanderbilt 486-249 in total offense and three sacks on a rainy day. South Carolina had more yards rushing (290) than the Commodores had total yards.

Harris, the sophomore running back limited last season by an injured groin, had himself a day. He ran for a 25-yard TD early in the third, and he added a career-long 88-yarder early in the fourth. South Carolina coach Will Muschamp said Harris gets better as the game goes on.

“You get tired of hitting him, and there’s nothing really soft on his body,” Muschamp said. "He’s got a short stature but he’s a very muscular guy. He runs with high knees, he gets behind his pads and when you take him on there’s nothing there that’s soft to hit. He’s a guy that wears on people as the game continues to go.”

Vanderbilt (0-3, 0-3) remains winless after having 56 scholarship players available for this game, just three above the limit set by the Southeastern Conference for a team to play a game. The Commodores already had six players opt out of this season.

Vanderbilt coach Derek Mason said he learned Thursday that his numbers would be limited by injuries and contact tracing during a pandemic.

Parker White kicked a pair of field goals, including a 43-yarder that gave the Gamecocks the lead for good in the first quarter.

Vanderbilt had its chances early to either tie or take a lead. Pierson Cooke missed a 29-yard field goal wide right for Vanderbilt and is now 1 of 4 this season.

In the second quarter, the Commodores went for it on fourth-and-2 at the South Carolina 3. Freshman Ken Seals rolled right and wound up being tackled, missing the chance to throw to a receiver in the end zone when open or run himself.

“We had a chip on our shoulder because we were 0-2,” Gamecocks linebacker Ernest Jones said.

Hill hit Nick Muse with a 32-yard pass, starting a 12-play, 96-yard drive that the South Carolina quarterback capped himself for a 14-point swing. Hill went over the top for a 1-yard touchdown and a 10-0 lead with 2:09 left in the first half.

South Carolina scored the final 24 points. Hill ran for a 10-yard TD in the third, and Harris broke loose for his 88-yarder and Dakeron Joyner had a 47-yard TD, both in the fourth.

South Carolina: Muschamp had to be happy that his Gamecocks topped 30 points for the first time in 17 games. ... Muschamp now is 8-1 against Vanderbilt all-time.

Muschamp credited the Gamecocks with being able to adjust well in the second quarter and into the second half. They had 60 yards rushing by halftime with 230 coming in the second half, and Muschamp said some runs they hadn't really practiced much.

“That’s a heck of a day running the football no matter who you’re playing against,” Muschamp said.

Vanderbilt visits Missouri. Asked if he will have enough players for the next game, Mason said he didn't know.