South Carolina looks for another upset against No. 9 Florida 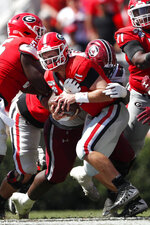 COLUMBIA, S.C. (AP) — While South Carolina players have enjoyed their big win over Georgia last week, the Gamecocks understand they need to build on success instead of reveling in it.

"You go to sleep, you wake up and you realize you've got another game to play," said Javon Kinlaw, who was named Southeastern Conference defensive lineman of the week for his performance against the then third-ranked Bulldogs.

South Carolina (3-3, 2-2 Southeastern Conference) walked off the field with the signature win of coach Will Muschamp's four seasons in Columbia, a 20-17, double overtime victory last Saturday. The Gamecocks look to bring that same level of play against No. 9 Florida (6-1, 3-1) on Saturday.

Muschamp wasn't shy this offseason, calling the Gamecocks the deepest and most talented group he's had since taking over as coach after the 2015 season. But the team stumbled out of the gates at 1-3 and carried a six-game losing streak against Power Five opponents into late September.

Things took a positive turn with a 24-7 win over Kentucky on Sept. 28, then went to another level with the victory at Georgia — where the Gamecocks had not won since 2011.

The victory was confirmation, center Donnell Stanley said, that the team is heading in the right direction.

"We see what we can do when we do all the right things, the small things," he said. "Like we didn't do early on in the season."

The past couple of days have been a dizzying and distracting time for players, who've been celebrated and cheered by friends, family and fans.

The Gamecocks vow they've put the celebrations behind them and are now fully locked in on Florida. The last time they beat two top-10 opponents was in 2013 — against No. 5 Missouri and No. 6 Clemson — the last of Steve Spurrier's three straight 11-2 teams. South Carolina is also looking for three consecutive SEC wins for the first time since 2017 and only the second time in Muschamp's tenure.

Freshman quarterback Ryan Hilinski was on the sidelines icing his left knee and cheering on his teammates after a hard hit late in the third quarter that certainly looked serious. But Muschamp said Hilinski had a knee sprain and has moved around well at practice with the plan to start against the Gators, who lead the SEC with 26 sacks and 12 interceptions.

Muschamp said his players have responded the way he hoped at practices this week following the Georgia win.

He told his players Tuesday morning that in life, "you generally get what you deserve."

The Gamecocks worked and prepared the right way to have a chance to take down the Bulldogs, Muschamp said. They'll need a similar work ethic if they want the chance to upset Florida.

"We're going to pour our guts into Florida," the coach said. "Hopefully, we'll create the opportunity to have the right to win on game day."

South Carolina's defense has played well the past two games. Muschamp has decided to play more of a four-three alignment instead of using a nickel scheme with five defensive backs.

That's meant more playing time for linebacker Sharrod Greene, and he's responded with 10 tackles in the Gamecocks past two wins. Having Greene on the field has allowed South Carolina to play faster, Muschamp said.

Along with Kinlaw's conference award, safety Israel Mukuamu was named defensive player of the week for his three interceptions (one returned for a touchdown) off Georgia quarterback Jake Fromm.

Jones said it's been a blast the last few days with the excitement over the Georgia win, but that's in the books and it's time to look ahead.