South Carolina looks to hit the ground running vs Georgia 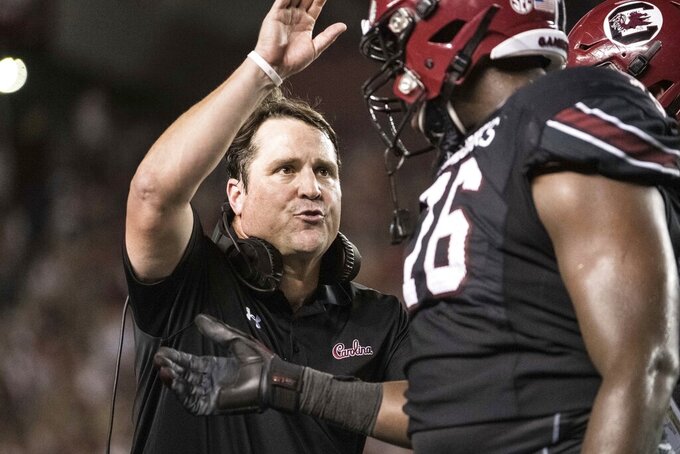 South Carolina head coach Will Muschamp welcomes players back to the sideline after a score against Kentucky during the first half of an NCAA college football game Saturday, Sept. 28, 2019, in Columbia, S.C. (AP Photo/Sean Rayford)

COLUMBIA, S.C. (AP) — South Carolina's best chance at stunning No. 3 Georgia might be playing just like the Bulldogs.

And, for a change, the Gamecocks (2-3, 1-2 Southeastern Conference) look to have the offensive pieces to be more than just competitive when they head to Georgia (5-0, 2-0) on Saturday.

South Carolina, which languished near the bottom of the SEC on the ground the past three years, is a surprising fifth in league rushing at more than 203 yards a game.

Georgia is on top of the SEC at better than 250 yards a game. The Bulldogs feature a talented, deep rotation of runners like D'Andre Swift, Brian Herrien, Zamir White, Kenny McIntosh and James Cook.

But South Carolina has a group of its own, led by senior Rico Dowdle and Clemson grad transfer Tavien Feaster — both who ran for more than 100 yards last time out as the Gamecocks topped Kentucky 24-7 on Sept. 28.

Dowdle, 10th in SEC rushing at 370 yards, can't wait for the chance to test a Georgia run defense that has given up less than 60 yards a game this season and has not permitted a rushing TD all years.

"This is definitely another obstacle that we'll have to face," Dowdle said. "It's a challenge that will be accepted."

South Carolina gained 247 yards on the ground in beating the Wildcats, a season high against Power Five opposition. Dowdle had 102 yards including a 30-yard touchdown run before coming out early in the fourth quarter with an ankle sprain.

Dowdle, who started only 12 games the previous two seasons due to injuries, was kept out of some drills to heal during South Carolina's bye week. He said he was feeling healthy at practice this week and Muschamp expected him on the field at Georgia.

Dowdle's rise this season is due in part to Feaster joining the Gamecocks. Feaster won two national titles as a backup at Clemson the past three seasons, but wanted a more prominent role this season.

The former five-star prospect from Spartanburg appears to have found it in South Carolina's backfield. Feaster finished with 107 yards and two TDs against Kentucky, averaging more 7 yards a rush.

Left tackle Sadarius Hutcherson said Feaster's addition has led both players to push each other to improve. "I believe that they motivate each other," he said.

If a team wants to run like Georgia, it helps having one of the Bulldogs' all-time rushers to teach it how. That's part of why Muschamp brought in Thomas Brown, ninth in Georgia history with 2,646 yards from 2004-07, as running backs coach this past offseason.

Dowdle said Brown stressed getting more out of a group of talented players who hadn't reached their potential. Brown showed film of him running some Georgia schemes, which have worked for decades, as examples of what he wanted.

Dowdle believes he's hitting the holes faster and that's led to longer gains. It's not anything different than he was taught since coming to South Carolina in 2016, he said, "but I think I'm taking better advantage of the opportunities."

Not everything has gone steadily in South Carolina's run game. The team managed just 16 yards on the ground in a 34-14 loss at Missouri last month. Georgia and its defensive front can make things just as difficult for the Gamecocks.

"Really, it starts up front with us," Bulldogs defensive tackle Michael Barnett said. "We just have to hold the points and read blocks, making sure nothing comes in our gaps and making sure we push everything that's supposed to come on the inside to the outside."

Dowdle said he and the Gamecocks are ready to take a very big step forward. "Having that mindset has been very effective for us," he said.