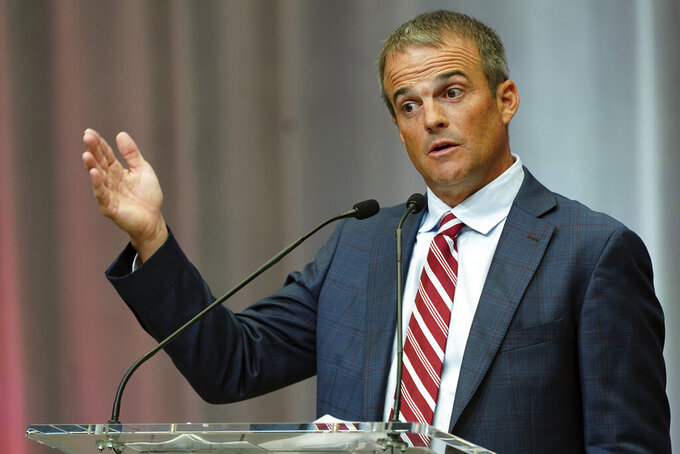 COLUMBIA, S.C. (AP) — South Carolina coach Shane Beamer is looking for more out of his program heading into his second season after a debut few saw coming.

The Gamecocks were considered one of the Southeastern Conference's weakest teams when Beamer took over for Will Muschamp in December 2020.

Nonetheless, the team is picked to finish fifth in the SEC East and will likely be the underdog in six of eight SEC games this year.

The players were thrilled with their finish last year, but are after bigger things than a winning season, Beamer said.

“The cool thing was, it was momentum coming back excited about the way we finished but also momentum about we can be even better,” he said.

Some on the outside also see the potential, too.

One of those people is ex-Oklahoma quarterback Shane Rattler, who transferred to South Carolina looking for a new start. Rattler also wants to show he's the passer he was two years ago when he led the Sooners to a Big 12 title and not the Heisman hopeful who was benched midway through last season.

Rattler has shown off a strong arm and a willingness to sit back, learn and fit in with his new teammates.

“It's a new situation, and a new place, so it's definitely exciting,” Rattler said. “I'm just ready to go.”

Rattler isn't the only one eager to get started. There are several transfers from Power Five teams with the Gamecocks this season, including Rattler's former Oklahoma tight end and teammate Austin Stogner and former Georgia defensive back Lovesea Carroll.

Beamer hasn't officially named a starting quarterback, Rattler is expected to be behind center for the opening snap against Georgia State on Sept. 3.

Some other things to look for this upcoming season:

South Carolina brought in nine scholarship transfers this season. Many, like Rattler, are expected to make significant contributions.

Tight end Stogner made 10 starts at Oklahoma the past two seasons. Former Arkansas State receiver Corey Rucker caught 59 passes for 826 yards a year ago, numbers that would've lead the Gamecocks. Defensive end Terrell Dawkins started six games as a freshman at North Carolina State in 2020 with nine tackles for loss.

The Gamecocks were next-to-last in points scored and total offense last year. Much of the blame fell on coordinator Marcus Satterfield in his first season leading a Power Five offense. Continuity was a major issue as the Gamecocks used four starters at quarterback. The rotation included grad assistant coach Zeb Noland, who was called to put on the pads again when expected starter Luke Doty was injured. Satterfield expects the added depth and a second year running their schemes will improve the flow.

While South Carolina's offensive bogged down early, its defense held firm throughout. The Gamecocks led the SEC against the pass, holding opponents to 180 yards a game through the air — 10 yards fewer than the pass defense of national champion Georgia.

Coordinator Clayton Moore is looking at an improved defensive line led by senior Zaach Pickens, who passed on the NFL to return, and cornerback Cam Smith, who led the team with three interceptions and 11 pass breakups.

A major reason for South Carolina's 38-21 bowl win over the Tar Heels was Dakereon Joyner, the receiver who made his first career start at quarterback. Joyner was named the game's MVP after going 9-of-9 for 160 yards and two long TDs to tight end Jaheim Bell. Offensive coordinator Marcus Satterfield says the Gamecocks will have schemes for Joyner behind center.

It's the SEC so that means a couple of early tests for South Carolina. The Gamecocks are at Arkansas on Sept. 10 before facing national champion No. 3 Georgia at home a week later. The Gamecocks play at home against another top-five opponent in Texas A&M on Oct. 22 and finish the regular season once again with what fans have dubbed, “The Orange Crush”: at Florida, home against Tennessee and at Clemson.