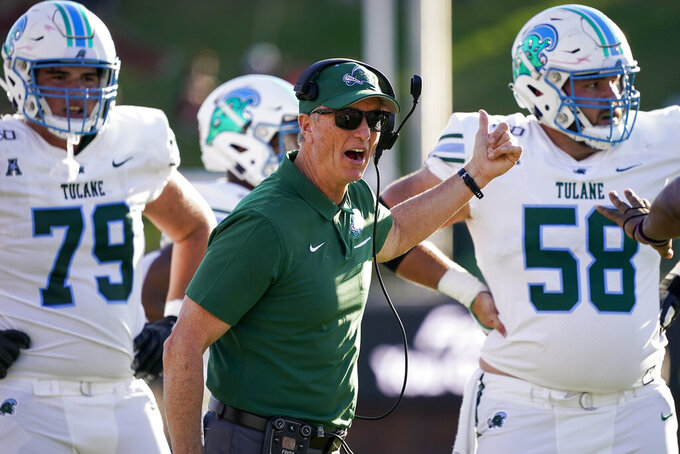 Tulane head coach Willie Fritz yells toward an official during the first half of an NCAA football game against SMU at Ford Stadium on Saturday, Nov. 30, 2019, in Dallas. (Smiley N. Pool/The Dallas Morning News via AP)

Two trophies in the renewal of a rivalry for the Golden Eagles and Green Wave. The campuses of the former conference foes are only about 115 miles apart, but both traveled more than 500 miles for their first meeting since 2010. The Battle for the Bell was already set to resume with four games between 2022-27, but that trophy and the Armed Forces Bowl trophy will now be up for grabs. The Golden Eagles have been in possession of the bell since 2003, after the first of six consecutive wins in the series. Both were C-USA charter members, but Tulane departed after 2013 for the AAC. They didn't play each other in league play from 2011-13, when in opposite divisions.

Tulane rushing game led by dual-threat quarterback Justin McMillan vs. Southern Miss rushing defense. The Green Wave are 13th nationally with 249.8 yards per game rushing, while the Golden Eagles are a top-20 rush defense allowing only 111.8 per game.

Tulane: McMillan has thrown for 2,229 yards and 14 touchdowns, and is also Tulane's leading rusher with 704 yards and 12 TDs. The grad transfer from LSU won consecutive Texas state championships at Cedar Hill High, about 35 miles from the TCU campus where the bowl is played.

The only other time Tulane played in bowl games in consecutive seasons was 1979 and 1980. ... In the 1987 game, a 17-year-old freshman quarterback named Brett Favre came off the bench to lead Southern Miss to a comeback win over Tulane in in his first college game. ... The other two USM QBs with 3,000-yard passing seasons are Austin Davis and Nick Mullens. ... Tulane is the only AAC school to have six different players rush for more than 200 yards. ... This is USM's fifth winning season in a row and 23rd in 26 years.