Spartans hope to give seniors good send-off against Rutgers 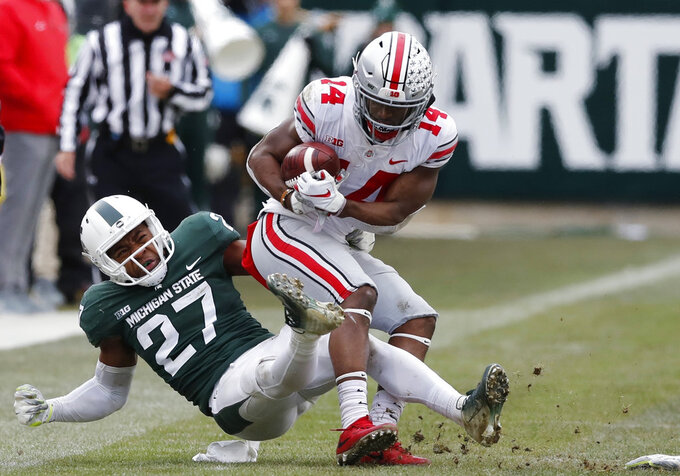 FILE - In this Nov. 10, 2018, file photo, Michigan State safety Khari Willis (27) stops Ohio State wide receiver K.J. Hill (14) during the second half of an NCAA college football game in East Lansing, Mich. In Willis' freshman season, the Spartans won the Big Ten and went to the College Football Playoff. Then the team collapsed to a 3-9 record the following year. Michigan State bounced back to win 10 games in 2017, but this season has been a disappointment the Spartans are barely bowl eligible as they enter their regular-season finale, against Rutgers. (AP Photo/Carlos Osorio, File)

His freshman season, the Spartans won the Big Ten and went to the College Football Playoff. Then the team collapsed to a 3-9 record the following year. Michigan State bounced back to win 10 games in 2017, but this season has been another disappointment — the Spartans are barely bowl eligible as they enter their regular-season finale.

"I think it's a lot of growth," said Willis, a Michigan State safety. "Through it all, learning, finding a way to stick together."

Willis is one of several Spartans set to be honored in a senior day ceremony before Saturday's game against Rutgers. Michigan State has lost two straight, which is nothing compared to Rutgers' 10-game skid but still leaves the Spartans with little to play for besides pride. Michigan State coach Mark Dantonio has urged fans to turn out anyway and make the experience a positive one for the seniors playing their final home game.

The Spartans (6-5, 4-4 Big Ten) lost last weekend on the road against a Nebraska team that is also having a rough season.

"You look at Nebraska and what they were able to do just from a fan-support standpoint," Dantonio said. "So looking for fans this weekend to come out. ... I don't ask for much sometimes. I just keep moving in the direction forward, but you know, this is a moment for our seniors."

The Spartans at least have enough victories to qualify for a bowl. Rutgers (1-10, 0-8) is wrapping up its fourth straight losing season and needs a win to avoid its first 11-loss season since 2002.

More things to know before the Spartans host the Scarlet Knights:

Brian Lewerke has dealt with injury problems recently, and Rocky Lombardi started last weekend's game at quarterback for Michigan State. Both were listed together atop the depth chart this week.

Artur Sitkowski and Giovanni Rescigno combined for only five completions for Rutgers in its loss to Penn State last weekend.

Raheem Blackshear rushed for 102 yards and a touchdown for the Scarlet Knights last weekend, but this week Rutgers will be up against a Michigan State team that is No. 1 in the nation in rushing defense.

Rutgers is winless in the Big Ten, and only two of its defeats were by single digits — a 24-17 loss to Indiana and an 18-15 loss to Northwestern.

"Every loss hurts. Whether it's by 50 or it's by five, every loss hurts," Ash said. "I am proud of the way that our players continue to work and fight and they continue to improve. That's where we're at. That's the circumstances that we are in."

Quarterback isn't the only position where Michigan State has been limited by injury. The Spartans are also without running back LJ Scott and receiver Felton Davis.

Matt Coghlin has made 81.6 percent of his field goal attempts at Michigan State and is first on the school's career list in that statistic. He's 31 of 38 for his career and 16 of 19 this season.