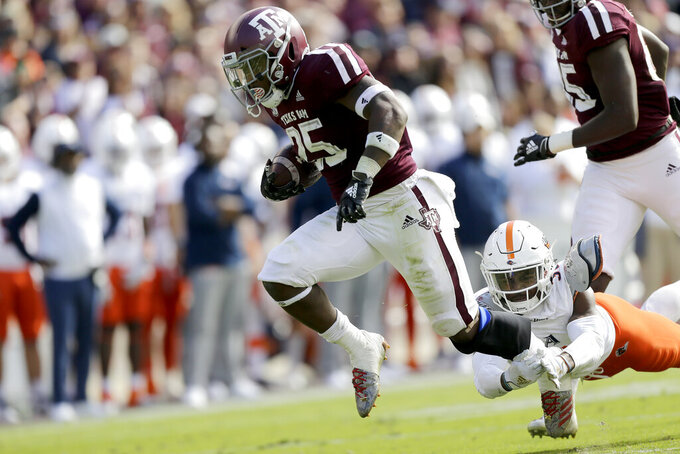 Texas A&M running back Cordarrian Richardson (25) breaks free from a tackle from a UTSA defender for a 19 yard touchdown run during the first quarter of an NCAA college football game, Saturday, Nov. 2, 2019, in College Station, Texas. (AP Photo/Sam Craft)

COLLEGE STATION, Texas (AP) — When Texas A&M fell behind by a touchdown early on Saturday against UTSA, the Aggies needed something to get them going quickly.

They got it in a 60-yard touchdown run by Isaiah Spiller on the first play of the next drive and the freshman's big day helped the Aggies to a 45-14 win.

"When you hit those one play drives it demoralizes people. It does," coach Jimbo Fisher said. "It takes the heart out of guys on the other side. It takes a mature team to bounce back from that and on offense it gives you that adrenaline."

Spiller set season highs with 217 yards rushing and three touchdowns to lead the Aggies to their third straight victory and make them bowl eligible for the 11th straight season.

"He was the catalyst today," Fisher said. "He's growing each and every day."

Kellen Mond threw for 211 yards and a touchdown, and his 1-yard TD run on the first drive of the fourth quarter made it 42-7. He was replaced on A&M's next drive with the Aggies in control of the game.

Mond said the development of the running game has really helped him in the passing game and he's been impressed by the growth of Spiller this season.

Lowell Narcisse had 90 yards passing and ran for 54 yards and a touchdown before injuring his right thumb early in the third quarter on a hard hit by Anthony Hines. He had to be helped to his feet and off the field. He walked to the locker room but did not return to the game.

Jordan Weeks took over and threw for 48 yards with an interception.

UTSA coach Frank Wilson was happy with his team's effort in the loss.

"I'm extremely proud of them," he said. "They never quit. They continued to fight ... unfortunately today our best wasn't good enough against a very quality football team."

The Roadrunners cut the lead to 45-14 when Dadrian Taylor intercepted a pass from backup Zach Calzada and returned it 58 yards for a touchdown with about five minutes left.

"We can see that we're getting better in a lot of areas (but) you can't relax, you've got to reload," Fisher said. "There's going to be three great games and we've got to get better and better"

Texas A&M's defense was in the backfield for much of the day and finished with four sacks, seven quarterback hits and 10 tackles for losses.

Narcisse put UTSA (3-5) on top in the first with a 2-yard touchdown run that made it 7-0. That play was set up by a 44-yard catch and run by Sincere McCormick two plays earlier.

The Aggies tied it when Spiller ran 60 yards for a touchdown on the first play of the next possession. Spiller is the fourth freshman in school history to run for at least 200 yards and the second Aggie freshman to run for three TDs in a game.

Mond connected with Jalen Wydermyer on a 7-yard touchdown pass near the end of the second quarter to push A&M's lead to 21-7 at halftime.

UTSA: While this one wasn't close, the 38 1/2-point underdog Roadrunners didn't look terrible against the bigger and stronger Aggies. Narcisse made some good plays before he was injured and Wilson said he thinks he'll be able to return next week.

Texas A&M: The Aggies didn't dominate the Roadrunners, but were solid and played clean football to pull away in the second half and get the convincing win. But they'll need to be better if they hope to finish out Southeastern Conference play strong with trips to No. 8 Georgia and top-ranked LSU coming later this month.

UTSA cornerback Cassius Grady on the feeling on the sideline after the Roadrunners took the early lead: "I honestly thought for a minute we were going to win this game. They weren't that good at all. They were good, but not what we thought they were going to be. We just fell short."

Texas A&M: The Aggies are off next Saturday before wrapping up their home schedule on Nov. 16 when they host South Carolina.