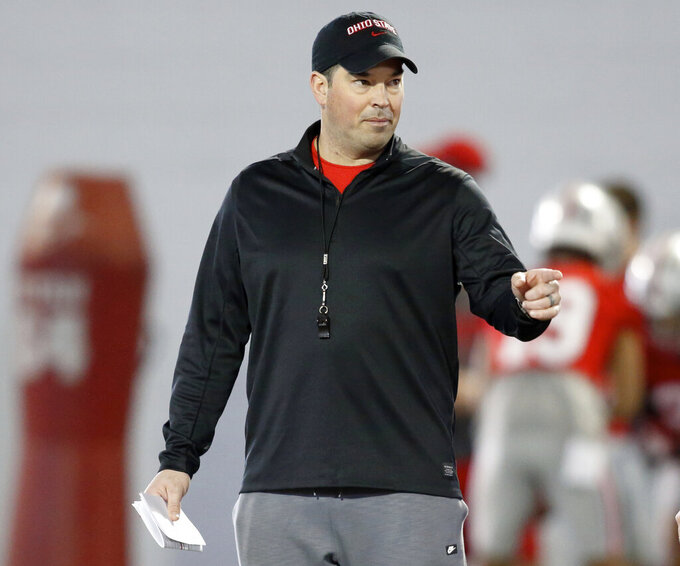 FILE - In this March 6, 2019, file photo, Ohio State University football coach Ryan Day gestures during an NCAA college football practice in Columbus, Ohio. Ohio State’s spring practice likely will begin a competition to determine who will be the Buckeyes’ starting quarterback in 2021. The contenders are highly touted freshmen Jack Miller or C.J. Stroud, both of whom were early enrollees and have been on campus since the beginning of the year. (AP Photo/Paul Vernon, File)

Coach Ryan Day got an initial look at Jack Miller and C.J. Stroud in the first of 15 practices that culminate in the spring game April 11. The highly touted freshmen are early enrollees and are expected to compete initially to back up Heisman Trophy finalist Justin Fields, who will be eligible to leave for the NFL after one more season.

Whoever wins that job will be in a good position to be the next Buckeyes starter.

“They came here for a reason early to learn and get spring practice under their belt,” Day said Monday. “This is really important for us. Actually they've been here six weeks, and they're picking it up good but it's different when you get out on the field."

Fields, a Georgia transfer, led the Buckeyes to a 13-1 record and an appearance in the playoff semifinals in his first year as a starter.

The former prep standouts will work alongside Gunnar Hoak, a transfer who was one of Fields' backups last season.

Miller is a dynamic pocket passer whose stock dropped after he had various injuries in his senior year. Already having a commitment from Miller, who is from Scottsdale, Arizona, since July 2018, Ohio State sought out another top quarterback for the 2020 class. They won over Stroud, from Cucamonga, California. He’s considered faster and more elusive than Miller.

Both downplay the competition. They’ve started going out for meals and even got together to watch the Super Bowl.

“I don’t necessarily look at it that way,” Stroud said. “In a sense, you kind of have to. It’s just that brotherhood of Ohio State. You know you’re going to come here and compete against great players. It comes with the territory for me.”

Said Miller: “I think competition starts as soon as you get to Columbus, but we don't spend time talking about it when we're together. I mean, it's just football. At the end of the day we want the same thing and we're both gonna work our tails off to get there.”

The players and Day acknowledge how with the transfer portal it’s easy for players to seek their fortunes elsewhere. Joe Burrow got stuck behind Dwayne Haskins Jr. on the Ohio State depth chart two years ago and moved on to win the Heisman Trophy and lead LSU to the national championship.

For 2020, the Buckeyes look to be in good shape. Fields returns with the core of last year’s fine offensive line in front of him. Receivers Chris Olave and Garrett Wilson are locked in, and a quartet of freshmen receivers might be the best group to come along in years.

With Heisman finalist Chase Young and cornerback Jeffrey Okudah moving onto the NFL, there will be some competition to fill out the defense, which last year was among the top in the nation.

Bright spots include the return of defensive end Jonathon Cooper, and cornerback Shaun Wade’s decision to stay for another year. But the three other spots in the defensive backfield will have new starters.

In addition to Miller and Stroud, the Buckeyes welcomed 13 other early enrollees.

“We want to have great players, the best players in the country but the right fit for this program and this culture,” said Day, who got a three-year contract extension last month.