Stanford seeks 1st FBS win in more than a year vs Oregon St. 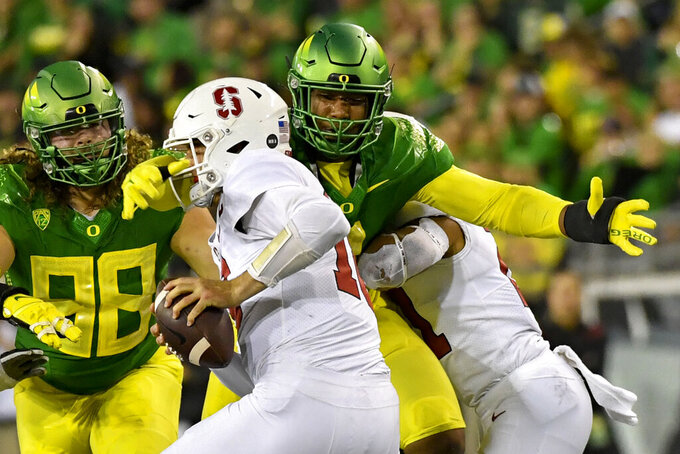 Line: Oregon State by 7, according to FanDuel Sportsbook.

Both teams are looking for their first conference win of the season. The Beavers lost the past two weeks against ranked teams Southern California and Utah. The Cardinal have lost to ranked teams USC, Washington and Oregon to start Pac-12 play.

Oregon State passing game vs. Stanford defense. The Beavers have thrown four interceptions in back-to-back games with Chance Nolan accounting for six and Ben Gulbranson for two. Nolan got hurt last week and it is uncertain who will start. The Cardinal are tied for the second fewest takeaways in the country and have only one in three games against FBS teams.

Oregon State: WR Tre’Shaun Harrison has been the Beavers' most reliable target. He's caught 16 passes for 251 yards and a touchdown over his past three games.

Stanford: RB Casey Filkins had 19 carries for 80 yards and three catches for 59 yards and a score last week. He has at least 75 yards rushing in each of the past three games and is averaging 124.3 from scrimmage in those games.

Oregon State snapped an 11-game losing streak in the series with a win at home last season. The Beavers haven't won at Stanford since 2006. ... Oregon State's 42-16 loss last week to Utah was its most lopsided defeat since 2019. ... The Beavers haven't allowed a sack in three straight games. ... Stanford hasn't beaten an FBS team since a win over Oregon on Oct. 2, 2021 — the longest active stretch of any FBS team. ... The Cardinal have lost 10 straight vs. FBS opponents by an average of 20.4 points per game. ... Stanford's nine-game conference losing streak is tied for longest in school history. The Cardinal also lost nine straight in 2002-03. ... Cardinal WR Michael Wilson has at least one catch in 22 straight games.