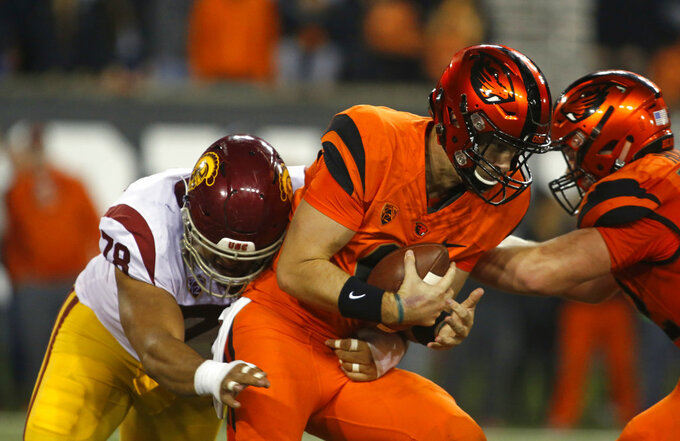 STANFORD, Calif. (AP) — After opening the season with four consecutive victories and high expectations, Stanford finds itself in an unusual situation when it hosts Oregon State on Saturday.

Stanford appeared in the Pac-12 championship game in five of David Shaw's first seven years as head coach. The worst the Cardinal has fared under Shaw is third in the Pac-12 North.

But Stanford has lost four of its last five games and is currently tied for third with Oregon heading into Saturday's game with the Beavers (2-7, 1-5), who are coming off a loss to Southern California.

The Cardinal has won eight straight over Oregon State, winning last year 15-14 thanks to a late fumble recovery.

"They've got kids that play hard and with heart," Shaw said. "We saw that last year. We won on the scoreboard and they kicked our butts all over the field in all three phases. We've lost four of the last five games. I don't have time to worry about anything else."

With top receiver JJ Arcega-Whiteside declared out for the game, quarterback K.J. Costello will look to tight ends Kaden Smith and Colby Parkinson and receiver Trenton Irwin for production.

Wide receiver Connor Wedington returned to action against Washington last week and Shaw said "he's likely to start in place of JJ. He came in and played well. Hopefully we'll see a lot more of Connor this game."

Here are some other things to watch for:

BETTER STARTS: Stanford has fallen behind in all but two games this year and it's something that has caused some frustration.

The Cardinal fell behind 21-0 to the Huskies and then rallied only to lose 27-23.

"It's been a constant theme of just trying to start faster," Irwin said. "We have what it takes to move the ball at will and to score at will. When we get pushed into a corner we have to show some fight. We keep working on the details."

"Practice-wise and with pregame drills, we have to get our team to play its best football at kickoff," he said. "The players know it and have tried new things. We haven't made the turn."

LOVE IS IN THE AIR: Stanford running back Bryce Love, who rushed for 71 yards Saturday, remains day-to-day, though Shaw said he showed some improvement against the Huskies last week.

"He had a little more quickness," Shaw said. "He's still not 100 percent. He's in pain, but the guy is one of the best running backs in America. He still goes out there and breaks tackles, makes big plays and picks up pass protection. He's not risking his draft status and he's not risking long-term injury. He loves this football team and he wants to play his best for this team."

INJURY REPORT: Stanford kicker Jet Toner, who missed the Washington game, will also sit out against the Beavers with an upper-body injury. Linebacker Joey Alfieri remains out and linebacker Mustafa Branch is questionable. Running back Trevor Speights and offensive linemen Devery Hamilton and Nate Herbig are all day-to-day.