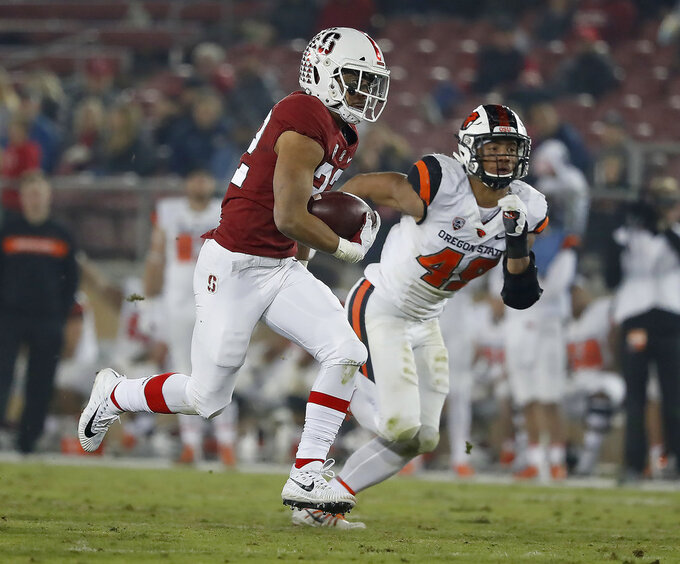 EL PASO, Texas (AP) — Even without Bryce Love, Stanford plans to stick with the running game in the Sun Bowl against Pittsburgh.

Because the Panthers (7-6) are powered by the first pair of 1,000-yard rushers in school history, coach Pat Narduzzi figures Monday's meeting against the Cardinal (8-4) will be something of an oddity in today's college game.

"This is going to be a game where the two teams both huddle," Narduzzi said. "I think fans might get a kick out of that. They might not know what that is. This is going to be like an old 1985 bowl game where both teams are going to line up with two backs in the backfield and actually run the football, not throw it and spread."

Love is the second lead Stanford back in three years to skip the Sun Bowl to focus on the NFL draft. Christian McCaffrey sat out the Cardinal's 25-23 victory over North Carolina in 2016, was drafted eighth overall by the Carolina Panthers the next spring and just finished in the top 10 in the league in rushing.

McCaffrey was trying to avoid injury after following a 2,019-yard season with another strong year. Love decided to return for his senior season after breaking McCaffrey's school record with 2,118 yards, but battled injuries while finishing with just 739 yards.

"With Bryce, it really didn't matter what you ran, he's going to find a way to make a play," Stanford coach David Shaw said. "We'll play most of the backs like we always do. We'll rotate those guys and keep those guys fresh."

Cameron Scarlett, also a senior, was second to Love with 236 yards, followed by 221 from junior Trevor Speights, who was among the Texas high school career rushing leaders in McAllen. Scarlett matched Love with a team-best six rushing touchdowns.

"Cameron Scarlett is more than capable," Shaw said. "He's had some big games, some big moments really throughout his entire career. Excited about what he's got a chance to do."

They also have the two longest runs in Pitt history, both TDs. Ollison went 97 yards against Virginia Tech this season, Hall 92 against Duke last year. Ollison has 189 carries to 137 for Hall.

"I think it keeps them fresh," Narduzzi said. "One big hoss gets a little tired, the next guy can come in and get it done. You're not just playing with one tailback that's a big, bruising back. You're playing two of them that can wear on a defense."

Receiver JJ Arcega-Whiteside can set a Stanford record with a touchdown catch. He's tied for the school mark and ranks third nationally with 14 TDs this season. He interned for former secretary of state Condoleezza Rice this past summer and is a native of Spain whose parents played pro basketball overseas.

Pitt sophomore Kenny Pickett is set for his 15th career start, with a 60 percent completion rate to go with 1,833 yards passing, 12 touchdowns and six interceptions. Stanford junior K.J. Costello passed the 5,000-yard mark for his career in a win at California to finish the regular season. He has 3,435 yards with 29 touchdowns and 11 picks.

Alex Kessman has six of the eight longest field goals in Pitt history. One of his two 55-yarders is the longest field goal, pro or college, at Heinz Field, also home of the Pittsburgh Steelers. Kessman had a school record-tying 56-yarder as a freshman and has three of the 16 longest kicks in the country this season.

The Cardinal have three in a row and are trying to finish on a solid winning streak with a Sun Bowl victory for the second time in three seasons. All four of Stanford's losses in a midseason stretch of five games came against teams in the top 20 of the College Football Playoff rankings: Notre Dame, Washington, Washington State and Utah.