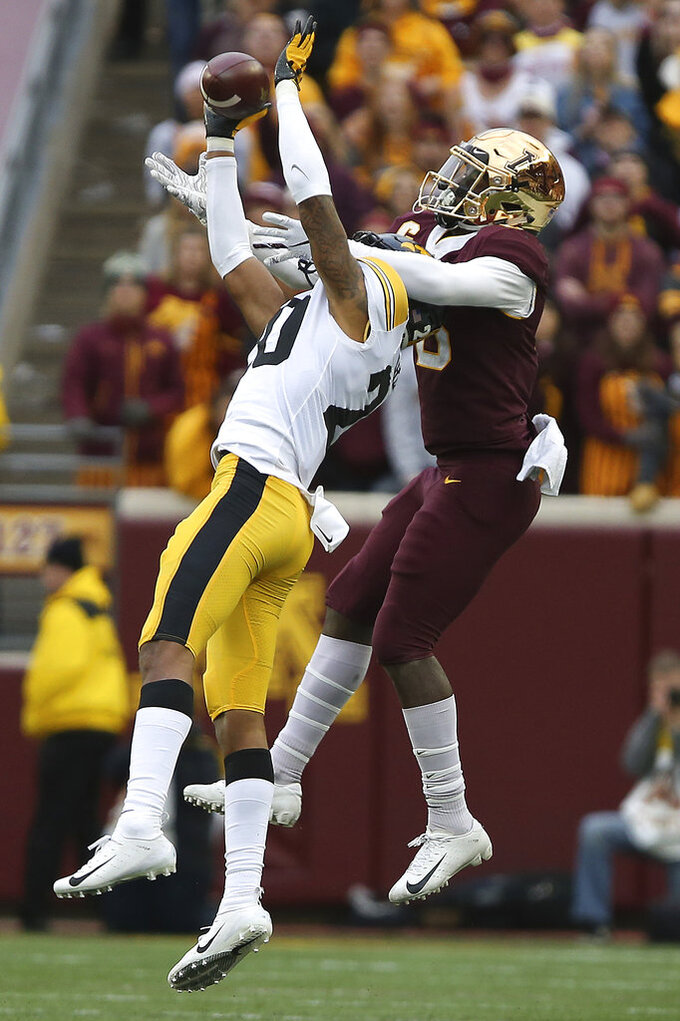 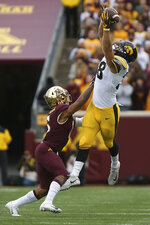 MINNEAPOLIS (AP) — Whether it was the touchdown on a fake field goal or the two true freshmen cornerbacks forced by injuries into the starting lineup, Iowa had to work hard to hoist that bronze pig.

Nate Stanley sure put in his share of sweat equity.

Stanley overcame two costly turnovers with four touchdown passes, and the Hawkeyes used four interceptions and five sacks of Minnesota's Zack Annexstad to beat the Gophers 48-31 on Saturday for the fourth straight time.

For Iowa (4-1, 1-1 Big Ten), this was a welcomed follow-up after losing a three-point lead with less than a minute left in the game against Wisconsin the last time out.

"I think everybody just took what happened two weeks ago on their own shoulders," Stanley said, "and really decided to hone in and lock in."

Stanley completed 23 of 39 attempts for 314 yards, finding T.J. Hockenson, Ihmir Smith-Marsette, Nick Easley and Noah Fant for scores. Hockenson added a short touchdown run on the fake kick to help the Hawkeyes beat the Gophers for the 14th time in the last 18 meetings and keep the Floyd of Rosedale trophy for another year.

Annexstad finished 17 for 33 for 218 yards and three touchdowns, as the Gophers (3-2, 0-2) continued the rollercoaster ride of a true freshman walk-on quarterback.

"To be into that game with that experienced of a team and that mature of a team and to have the start we had," coach P.J. Fleck said, "that thing could've been 64 to nothing."

Anthony Nelson had three sacks for Iowa. Riley Moss (two) and Julius Brents (one), the new starting cornerbacks, combined for three interceptions. Moss, a frequent target by Annexstad, hauled in one in the end zone late in the second quarter while landing on his back.

Turning to not one but two rookies at a critical position midway through a season is unusual, but starters Matt Hankins and Michael Ojemudia were hurt.

"Unnerving would be a good word," Ferentz said.

The game was full of rarities, actually.

Hockenson, who teamed with Fant to give the Hawkeyes seven receptions for 105 yards from their tight ends, supplied the most surprising play in the second quarter of a game filled with highlight-reel moments.

On fourth-and-goal from the 4, the typically conservative Ferentz approved the swinging-gate formation with the entire line except the center motioned right. The snap went diagonally to Hockenson, who hustled from the shifted backfield around the corner to reach the end zone.

"They convinced me," Ferentz said, "and it was like however many guys on our staff versus one, so I guess that's one vote I did lose."

Fleck called a fake punt a little later that backfired, when the pass by Jacob Herbers from midfield fell incomplete. The Hawkeyes went the other way for a touchdown and a 28-10 lead.

Though they trailed 21-7, the Gophers didn't wilt. The fearless Annexstad, who hobbled off the field with an aggravation of his sprained ankle after one of Nelson's sacks in the second quarter, kept going deep. Sometimes he threw too high and other times too far inside, but he found Rashod Bateman seven times for 65 yards and two touchdowns and connected with Tyler Johnson six times for 107 yards and a score.

"He's learning," Johnson said. "He has a lot of weight on his shoulders, but he's hanging in there."

On the first play after the first interception by Moss, Stanley rolled right and threw into traffic with 1:12 left before halftime. Jacob Huff picked the ball off at the 27 and returned it to the 6, setting up Johnson's touchdown catch.

"It was not a smart play," Stanley said. "I should have just thrown that ball away."

In the third quarter, Carter Coughlin blew by left tackle Alaric Jackson for a strip-sack of Stanley that was recovered by Thomas Barber at the 10 and returned to the 3 to set up a touchdown run by Seth Green that cut Iowa's lead to 31-24. That was as close as the Gophers got, though.

"We need to figure out how to close that gap," Coughlin said.

PILING UP THE POINTS

Iowa: The Hawkeyes responded authoritatively to the disheartening defeat by West Division favorite Wisconsin. Stanley directed each of the first two drives for touchdowns, and he produced plenty of clutch throws throughout the afternoon as the Hawkeyes moved the chains on 12 of 21 plays on third or fourth down.

Minnesota: After giving up 315 yards rushing on 37 attempts to Maryland, the Gophers defense muscled up and limited Iowa to 106 yards on the ground on 40 carries. There were several costly coverage breakdowns in an inexperienced secondary now missing star safety Antoine Winfield Jr. for the season because of a foot injury, but the way the front seven played ought to serve Minnesota well the rest of the way toward trying to reach bowl eligibility.

Iowa: Plays at Indiana next Saturday.

Minnesota: Plays at No. 3 Ohio State next Saturday.

By John Zenor 34 minutes ago
By Pete Iacobelli an hour ago
an hour ago
By Ralph D. Russo 5 hrs ago
By Ken Powtak 18 hrs ago