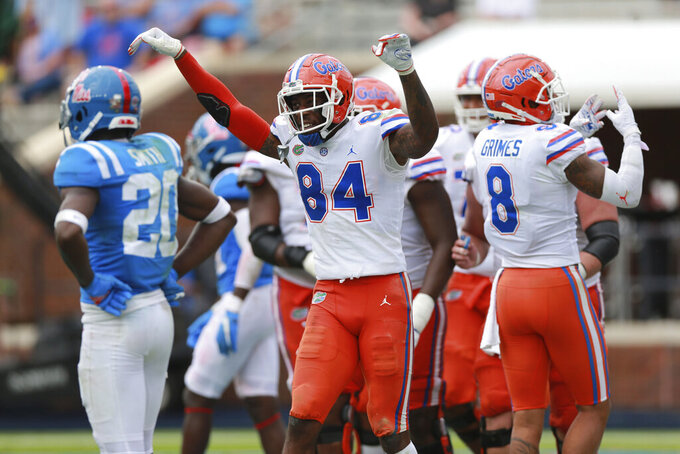 Ebner finished with 272 all-purpose yards in the Bears' 47-14 win over Kansas, the third-highest total in program history and the most in the nation this season.

Ebner scored on a 1-yard run and an 18-yard pass from Charlie Brewer before he ran back the second-half kickoff 100 yards and returned a free kick 83 yards for a score after a safety.

Ebner's four touchdowns in Baylor's opener were one off his total of five in 2019.

Kyle Pitts' big day in Florida's 51-35 win over Mississippi was the kind rarely seen by a tight end.

Pitts' four receiving TDs were the most by a Florida player since Ike Hilliard had the same number against Tennessee in 1995. His receiving yards total was the highest by a Gator since Demarcus Robinson’s 216 against Kentucky in 2014.

Oklahoma's 21-point lead against Kansas State was the biggest the Sooners had ever blown in a loss, according to OU research.

Before Saturday, the Sooners had never squandered a lead greater than 17 points in a loss. That happened three times: 1999 against Texas in Dallas, 2007 at Colorado and in the 2017 season against Georgia in the College Football Playoff semifinal at the Rose Bowl.

The Miners have one more win than their total over the previous three seasons, a stretch in which they were 2-34.

Their 31-6 win at Louisiana-Monroe on Saturday was their first nonconference road victory outside Texas or New Mexico since they won at Louisiana-Lafayette in 2008.

Daetrich Harrington had career highs of 32 carries for 211 yards and four touchdowns in a 52-21 win over Campbell, the most by an Appalachian State player since 2009.

App State was missing 18 players who were quarantining because of exposure to COVID-19 and had to lean on Harrington. He led a rushing attack that totaled 404 yards.

Four of the six teams with the most turnovers are from the ACC. Duke has committed 14, most in the nation, and is followed by Georgia Tech with 12. Louisville has the fourth-most in the country, at eight, and Florida State is tied for fifth with six.

Iowa State's JaQuan Bailey, who missed the last nine games in 2019 with a leg injury, is back in top form. His school record-tying 3.5 sacks in a 37-34 win over TCU made him the Cyclones' all-time leader with 22. He also became ISU's career leader in tackles for loss, with his four against the Horned Frogs giving him 36.5.

His sack total against TCU was the Cyclones' highest since Jason Berryman had the same number against TCU in the 2005 Houston Bowl.