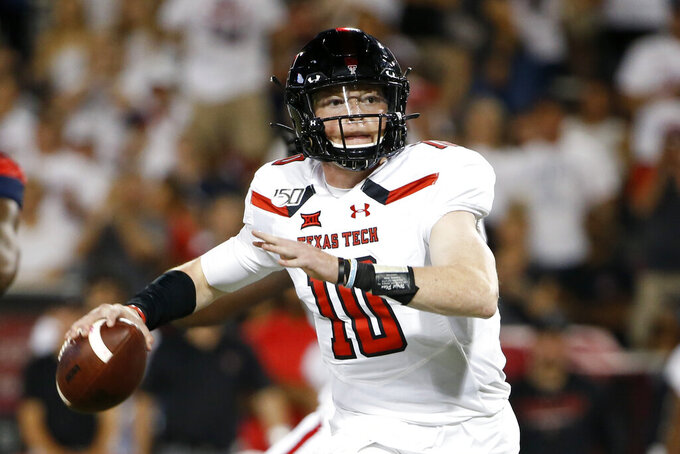 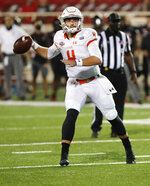 Oklahoma, Texas and Texas Tech were the only FBS teams with over 400 yards through the air. They combined for 1,395, completing 97 of 129 attempts (75%) with 14 touchdowns and just two interceptions.

OU's Rattler hit on 14 of 17 passes for 290 yards and four touchdowns in just two quarters against FCS Missouri State. Top backup Tanner Mordecai also was 14 for 17, and the Sooners finished 30 of 36 for 484 yards with five TDs and an interception in the 48-0 win.

Texas' Ehlinger was 25 of 33 for 426 yards and five touchdowns, both career highs, in a 59-3 win over UTEP. His passing total ranked No. 3 in program history and his five TDs tied for second most. The Longhorns played two other QBs and ended up 29 of 41 for a school-record 481 yards and seven TDs.

Texas Tech's Alan Bowman was 38 of 52 for 430 yards with two TDs and an interception against FCS Houston Baptist.

The Red Raiders hung on to win 35-33, but Bowman was overshadowed by Houston Baptist's Bailey Zappe. The Huskies' fourth-year starter threw for 567 yards and four touchdowns in his team's first game against a Power Five opponent. Last week, Zappe threw for 480 yards and three TDs in a loss to North Texas.

Miami's D’Eriq King extended his FBS record streak of at least one rushing touchdown and one passing TD to 16 games. The fifth-year senior passed for 141 yards and a touchdown and ran for a team-leading 83 and a score in a 31-14 win over UAB, his first start since transferring from Houston.

UTSA's Sincere McCormick is the national rushing leader after breaking his school record with 197 yards on 29 carries in the 51-48 double-overtime win over Texas State. The 2019 Conference USA freshman of the year went over 100 yards three times last season.

Louisiana-Lafayette generated only 275 yards of offense in its 31-14 win at No. 23 Iowa State — the Ragin' Cajuns' fewest in a victory since they beat Louisiana-Monroe in 2000.

ULL also joined Houston, UCLA and Southern Mississippi as the only four schools to record a punt return and kickoff for touchdowns in the same game in the last two years.

Mack Brown's North Carolina defense put together one of its best performances in years in its 31-6 win over Syracuse.

The Tar Heels’ seven sacks were their most since recording the same number against Pittsburgh in 2013. The six points and 202 total yards allowed were the fewest allowed to an ACC opponent since 2009.

WELL, THAT WAS EASY

South Florida freshman Omarion Dollison's college career got off to a memorable start in a 27-6 win over the Citadel. He tied the record for shortest punt return touchdown in NCAA history — 0 yards — when he caught a shank off the foot of Matt Campbell in the Citadel end zone.