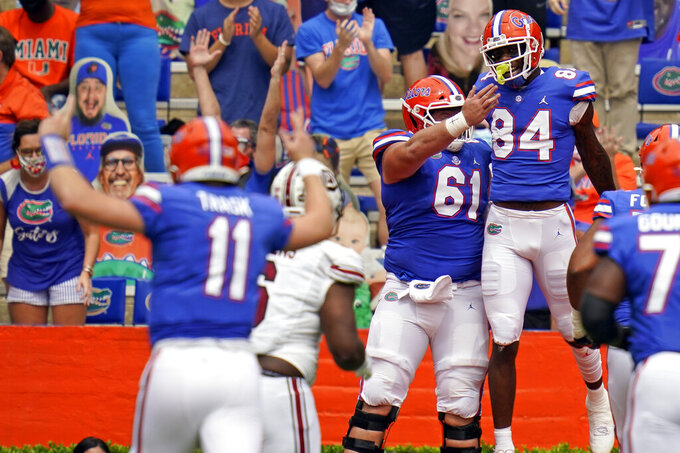 Khalil Herbert seems to be feeling right at home at Virginia Tech, moving to the top of the national rushing chart with his stellar performance against Duke.

Herbert carried 20 times for 208 yards and two touchdowns in the 38-31 win and entered this week averaging 156 per game.

Herbert also had 150 kick return yards against Duke. His 358 all-purpose yards were a program record and the highest total in the nation this season.

The 5-foot-9, 212-pound Herbert is playing his final season as a graduate transfer. He planned to redshirt at Kansas last season after Pooka Williams took the starting job from him following the second game. Herbert ultimately decided to leave and enrolled at Tech in January.

Reggie Roberson Jr. became the first SMU receiver to total more than 200 yards receiving in a game, catching five balls for 243 in a 30-27 win over Memphis.

The senior is among five receivers in the nation since 2015 to go over 200 yards on so few catches. Highlighting his day were touchdowns of 85 and 70 yards. The man throwing to Roberson was Shane Buechele, who passed for a career-high 474 yards and three TDs and had a career-high 501 yards of total offense.

Roberson's other 200-yard receiving game was last season, when he had 250 against Arkansas State.

Bumper Pool continues to be a tackle machine for Arkansas. The junior linebacker made a career-high 20 in a 21-14 win over Mississippi State, his third straight game with double-digit tackles.

An aside: Pool was named James Morris Pool at birth. According to WholeHogSports.com, he legally changed his first name to Bumper when he turned 16 with his parents’ blessing.

Florida, which beat South Carolina 38-24, has scored at least 35 points in consecutive games against Southeastern Conference opponents for only the second time since 2009. The Gators also did it in 2012.

Florida is averaging 41.3 points over its last four games.

Oklahoma goes into the Red River Rivalry game against No. 22 Texas in danger of losing a third straight game for the first time since John Blake's 1998 team dropped five in a row.

Leaders after the first month of the season: