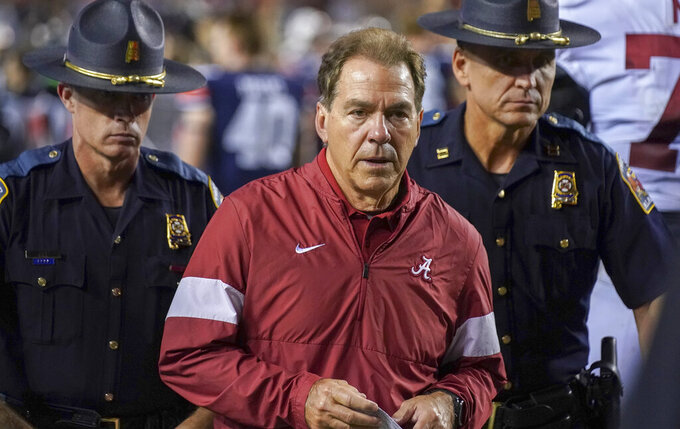 Alabama Head Coach Nick Saban walks off the field after losing to Auburn in an NCAA college football game in Auburn, Ala., on Saturday, Nov. 30, 2019. (Chris Shimek/The Decatur Daily via AP)

Kentucky’s performance against Louisville accentuated how dominant its rushing attack has been this season.

With 517 yards on the ground Saturday, the Wildcats set a school single-game record for the second straight week and moved closer to their first Southeastern Conference rushing title.

The Wildcats’ 3,293 rushing yards are most in school history and their 12-game average of 274.4 per game ranks fifth in the nation and is 23 yards ahead of the No. 2 SEC rushing team, Mississippi.

UK’s key has been converted receiver Lynn Bowden, who became the starting quarterback six games into the season because of injuries. He ran 22 times for an SEC quarterback record 284 yards against Louisville, the second-highest total in UK history, and tied the school record with a career-high four touchdowns. Chris Rodriguez added 125 yards on nine carries against the Cardinals.

Bowden was among five players to rush for more than 200 yards, led by Buffalo’s Jaret Patterson.

Patterson set national season highs with 298 yards and six touchdowns on 22 carries against Bowling Green on Friday. The rushing total was the highest since Jonathan Taylor of Wisconsin went for 321 against Purdue in November 2018.

A couple nuggets from ESPN Stats and Info in the wake of Auburn’s 48-45 win over Alabama: the Crimson Tide were 114-0 on the field since 1936 when scoring at least 45 points, though one of those games was forfeited later. Also, since Nick Saban became Alabama coach in 2007, his kickers have missed 101 field goals, most by any Football Bowl Subdivision team in that span.

Also, Joseph Bulovas, who bounced what would have been the tying 30-yard field goal off the left upright with 2 minutes left, is the only SEC kicker to miss more than one field goal from 30 yards or closer this season.

Two of the season’s three 100-yard interception returns happened Saturday. Hawaii’s Rojesterman Farris II took a pick-six all the way back against Army, and Auburn’s Zakoby McClain did it against Alabama. The other 100-yard pick six was by Missouri’s Ronnell Perkins, against South Carolina, in September.

Washington State’s Anthony Gordon finished the regular season occupying the top six spots on the national chart for single-game completions after connecting on 48 passes against Washington. His top six games, with number of completions: 41, 44, 44, 45, 48, 50.

Texas Tech’s Jett Duffey and Alan Bowman are the only other quarterbacks to complete 40 in a game.