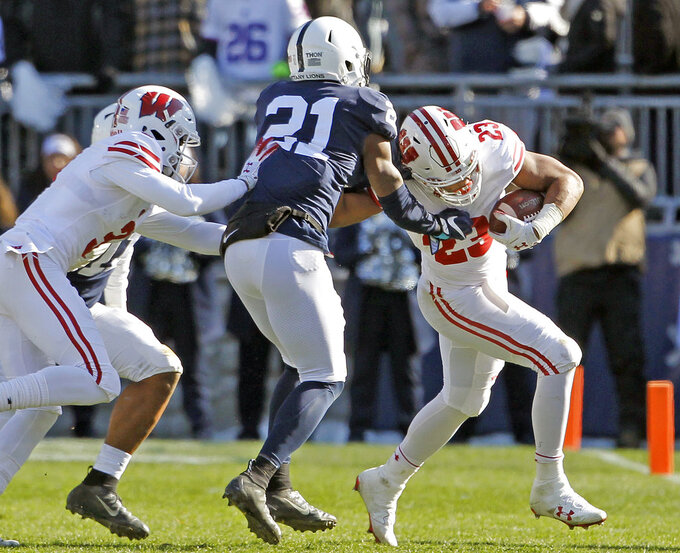 Wisconsin's Jonathan Taylor (23) is pushed out of bounds by Penn State's Amani Oruwariye (21) during the first half of an NCAA college football game in State College, Pa., Saturday, Nov. 10, 2018. (AP Photo/Chris Knight) 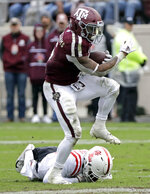 Pittsburgh's success running the ball against Virginia Tech was reminiscent of the days when Tony Dorsett was piling up yards for the Panthers.

The Panthers amassed 492 rushing yards in their 52-22 win Saturday, the most since the Dorsett-led Panthers ran for 530 against Army in 1975. It was the No. 2 rushing total in program history and just ahead of the 484 yards they ran for against Duke on Oct. 27.

Pitt set a school record with 654 total yards, its second game with more than 600 yards this season.

Qadree Ollison had a career-high 235 rushing yards for the Panthers, including a school-record 97-yard touchdown that matched the longest run in the nation this year.

The other 97-yard run, by Notre Dame's Dexter Williams, also came against Virginia Tech, which has given up three of the 11 longest runs this season.

Four other players had 200-yard games. Trayveon Williams of Texas A&M had 228 against Mississippi in his second 200-yard game this season. Temple's Ryquell Armstead picked up 210 yards against Houston , Maryland's Anthony McFarland had 210 against Indiana and Notre Dame's Williams had 202 against Florida State.

Temple's Armstead set a national season high with six rushing touchdowns, the most since Kalen Ballage of Arizona State ran for seven against Texas Tech in 2016.

IT KEPT GOING AND GOING

Tyson Dyer of New Mexico had the longest punt in the nation, and program history, when he boomed one 84 yards against Air Force.

Wisconsin's Jonathan Taylor maintained his lead in the national rushing race. He averaged a season-best 9.25 yards per carry while running for 185 against Penn State, increasing his season total to 1,548 yards. Memphis' Darrell Henderson has 1,446 yards.

Texas Tech's Antoine Wesley averages 134.7 yards to lead the nation in receiving. UMass' Andy Isabella is right behind, at 134.5.

STAT OF THE WEEK

Two kickers from the state of Utah have kicked six field goals in a game.

Matt Gay of the Utah Utes connected on a school-record 6 of 6, including a season-long 55-yarder, and finished with 20 points against Oregon.