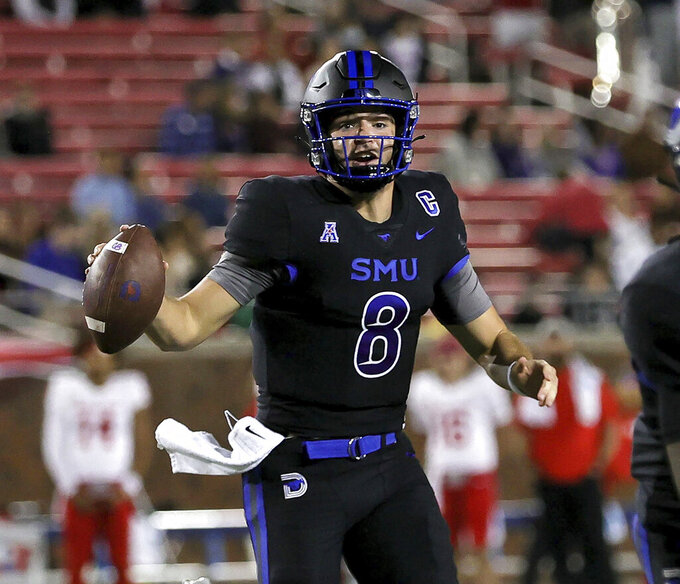 The Mustangs' 77-63 win on Saturday set the NCAA record for most combined points in a regulation game, and Mordecai was responsible for 60.

Mordecai became the fifth Bowl Subdivision player to throw for seven touchdowns in a half and he finished with nine, the most since Washington State's Anthony Gordon passed for the same number against UCLA in 2019. Mordecai needed only 37 attempts to achieve his feat; Gordon had 61.

One of the fifth-year quarterback's eight runs also went for a touchdown, making him responsible for 10 TDs — the most since at least 2000, according to Sportradar — on just 45 total offense attempts.

Mordecai has 25 TD passes on 300 attempts this season, an 8.3% rate that ranks third among quarterbacks with at least that many attempts.

Five players turned in 200-yard rushing performances to bring the total to 21 this season.

Kansas' Devin Neal went for 224 yards on 32 carries against Oklahoma State and also had six catches for 110 yards. His and Saydee's 334 all-purpose yards are tied for second-most this season in the Bowl Subdivision.

Neal also became the first player in Kansas history with at least 200 yards rushing and over 100 yards receiving and the fifth Power Five running back to accomplish the feat since 1996.

Texas' Bijan Robinson had 209 yards on 30 carries against Kansas State. Robinson has two 200-yard games this season and has gone over 100 in seven straight games.

Iowa's Kaleb Johnson had a career-high 200 yards rushing on 22 attempts against Purdue.

Adrian Martinez's 48 turnovers while at Nebraska from 2017-21 were most in the nation. Now at Kansas State, Martinez threw an interception and lost a fumble against Texas for his first two turnovers of the season.

Among Bowl Subdivision quarterbacks with a minimum of 15 pass attempts per game, Martinez is among six who have committed two or fewer turnovers, according to Sportradar.

Martinez's interception came on his 155th pass of the season. He set the school record for most pass attempts into a season before throwing an interception. Chad May went 151 passes without a pick to begin the 1994 season.

Notre Dame first-year cornerback Benjamin Morrison ran back an interception 96 yards against Clemson, the longest of the season in a game matching FBS opponents.

Morrison had his first career interception in the third quarter before his pick-6 gave the Irish a 28-0 lead on their way to a 35-14 win.

HOLLOWAY ALL THE WAY

Virginia Tech's Tucker Holloway ran back a punt 90 yards for a touchdown against Georgia Tech, tied for longest punt return of the season. The first-year player finished with seven punt returns for 188 yards, most by a Virginia Tech player since at least 1987.

A week after recording eight sacks against Nevada, San Jose State racked up nine more against Colorado State. The 17 sacks are the most in back-to-back games in at least 10 seasons, according to NCAA records.