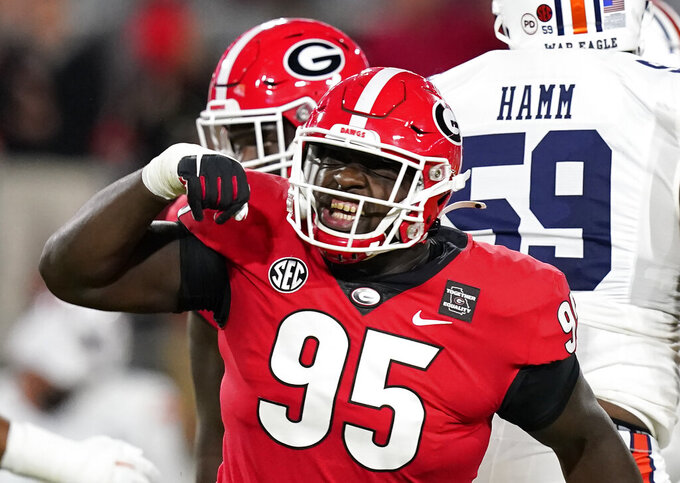 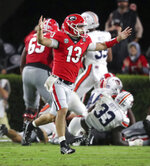 ATHENS, Ga. (AP) — The Mailman delivered for Georgia in his first college start, teaming with a dominant defense to lead the Bulldogs to an eye-opening victory in the first Top 10 matchup of the college football season.

Stetson Bennett threw for 240 yards and a touchdown, solidifying his hold on the quarterback job as No. 4 Georgia romped past No. 7 Auburn 27-6 Saturday night.

The Bulldogs (2-0) buried Auburn (1-1) with a 24-0 blitz in the first half, getting a pair of 1-yard TD runs from Zamir White to extend their domination of the Deep South's oldest rivalry.

“Pretty cool" was the way Bennett described it.

“It's so easy to play football," he said, “when the defense plays as well as they did, when you run the ball as well as we did, and the guys on the outside are making plays like they did,.”

Even with a catchy nickname, which he picked up during his high school days after he wore a U.S. Postal Service cap in an effort to get noticed, Bennett was never viewed as a starting candidate for the Bulldogs.

He initially walked on at Georgia, left for a junior college hoping to boost his chances of playing elsewhere, and only returned to the Bulldogs last season when they desperately needed an experienced backup behind Jake Fromm.

Over the summer, Bennett was far down the depth chart. Jamie Newman and JT Daniels were transfers who had started at other schools. Redshirt freshman D'Wan Mathis was viewed as a talented prospect.

Even when Newman opted out of the season, Bennett was left to take snaps with the third team.

After Mathis struggled in the season opener at Arkansas, and with Daniels still not cleared to play after undergoing major knee surgery, Bennett came on to throw a pair of TD passed that sparked the Bulldogs to a 37-10 victory.

That earned him a start against Auburn.

The opportunity may have been a long time coming, but Bennett sure took advantage of it before a socially distanced crowd of 20,524 at Sanford Stadium.

“My goal was always to start here,” the fourth-year junior said. “That's why I came here in the first place.”

Bennett didn’t make any major mistakes while completing an efficient 17 of 28 passes, including a 21-yard touchdown to George Pickens.

Auburn was held to a pair of field goals. The offense simply never got going behind Bo Nix, who completed just 21 of 40 passes for 177 yards. The running game was no help at all, held to 39 yards and a 1.8-yard average per carry.

Nix's run of 251 consecutive passes without an interception was snapped with a third-quarter pick by Mark Webb, ending the second-longest active streak in college football behind Clemson’s Trevor Lawrence.

The teams had traditionally played in November, but a revamped Southeastern Conference schedule in this pandemic-affected season moved the game up to Week 2. It was their earliest meeting since the very first game in the series was played in February 1892.

No matter the time of year, Georgia kept the upper hand with a fourth straight victory over Auburn. The Bulldogs have won 13 of the last 16 meetings.

Auburn: Coach Gus Malzahn is sure to face renewed criticism after his offense turned in another miserable performance against the Bulldogs. The Tigers have scored a total of 37 points in the last four games in the series.

“They won the line of scrimmage,” Malzahn said. "We really got whipped in all three phases. We got outcoached.”

Georgia: Smart was willing to play multiple quarterbacks against Auburn, but it wasn't necessary with Bennett's performance.

The Mailman is rapidly becoming one of college football's feel-good stories of 2020, though Smart won't hesitate to turn to Mathis or Daniels if the offense bogs down.

A safety from each team was ejected because of targeting.

Auburn's Smoke Monday was tossed for a hit on Jackson in the first quarter. Georgia star Richard LeCounte got the boot in the second period for a helmet-to-helmet collision with Auburn receiver Shedrick Jackson.

After rushing for 41 yards on five carries, Georgia running back James Cook left the game in the second quarter with an injured right shoulder. Smart downplayed the injury, saying Cook could have come back in the game if needed.

Auburn welcomes Arkansas (1-1) to Jordan-Hare Stadium next Saturday. The Razorbacks will be coming off a 21-14 upset of No. 16 Mississippi State.