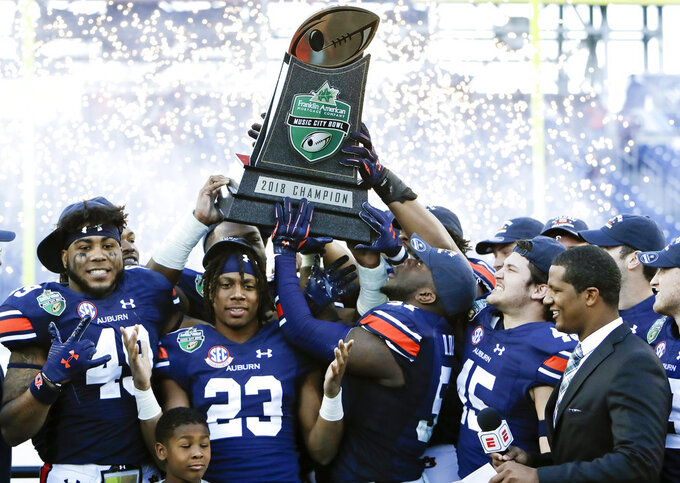 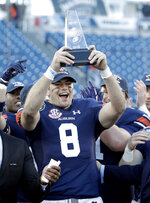 A record-setting encore in the Music City Bowl.

Jarrett Stidham threw for a career-high 373 yards and five touchdowns in his final college game , and Auburn pounded Purdue 63-14 on Friday.

The Tigers (8-5) opened the season with a top-10 ranking before stumbling in Southeastern Conference play against unranked and ranked teams alike. The Tigers finished with their first postseason victory since the 2015 Birmingham Bowl against Memphis and a whole bunch of records.

Auburn scored the most points by an SEC team in a bowl, topping Alabama's 61-6 win over Syracuse in the Orange Bowl on Jan. 1, 1953. The Tigers had a chance to match the most points ever in a bowl at 70, most recently by Army in the Armed Forces Bowl last week, but took a knee at the Purdue 1 after a replay review overturned a very late TD run by Joey Gatewood.

"We've had some ups and downs this year," Auburn coach Gus Malzahn said, crediting his seniors for keeping the Tigers together. "This was a big win for us."

Stidham, a junior who already has declared his intention to leave early for the NFL draft, got the Tigers off to a fast start, and they just poured it on from there.

"We just tried to make those explosive plays that we've needed all year," Stidham said.

Auburn scored TDs on its first eight possessions. It tied the Music City Bowl records for most points and TDs set by West Virginia in 2000 — with 5:36 left in the first half. By halftime, Auburn led 56-7 with the most points scored in any half in program history after holding the ball for only 11 minutes. It was the most points by one team in a half in any bowl.

"I mean it was a thing of beauty to watch from the sideline to watch the guys make plays," Malzahn said. "When we make explosive plays and we play fast, we're a pretty good offense, and today it all came together. I really believe that will carry over to next season."

Purdue (6-7) dropped three of its last four games in its second season under coach Jeff Brohm.

"That one snowballed faster than most," Brohm said. "I've been part of games that were a bad outcome, but that one happened fast. Credit to them, they made their breaks. Every little thing that went wrong seemed like it could. We got behind the eight-ball early."

Auburn started the game with the ball and needed only 63 seconds to set the tone, with Stidham finding JaTarvious Whitlow for a 66-yard TD pass. Whitlow also added a pair of short TD runs as Auburn led 28-7 at the end of the first quarter.

The Tigers outgained Purdue 586-263 in total offense and had only one three-and-out late in the third quarter. Purdue was intercepted twice and turned it over on downs twice. Auburn punted once all game.

Darius Slayton set a bowl record with TD catches of 74 , 52 and 34 yards and finished with 160 yards receiving. Javaris Davis had a sack and an interception in the first quarter for Auburn, and Big Kat Bryant returned an interception 20 yards for a 45-7 lead with 12:29 left in the first half.

Purdue: With defensive tackle Lorenzo Neal out after tearing an ACL in the regular-season finale against Indiana, the Boilermakers had little answer for anything Auburn tried on offense.

Auburn: It sure looks as if Malzahn made the right decision when he took back the play-calling duties he handled his first three seasons at Auburn. Only five other teams have scored more in a bowl game, and the Tigers set a school record for total yards in a bowl.

Stidham bucked the new trend of not playing in bowl games, and he very likely helped his draft stock with his performance. He was 13 of 18 for 335 yards and four TDs at halftime and nearly had a TD run only to be ruled just short. Stidham said he had to play as a competitor.

"In my two short years here, I've grown so close to these guys I could never imagine not finishing the season with them," Stidham said.

Purdue: Brohm has a lot to replace with a senior class of 29 counting walk-ons. The departing Boilermakers include quarterback David Blough and top running backs in D.J. Knox and Markell Jones.