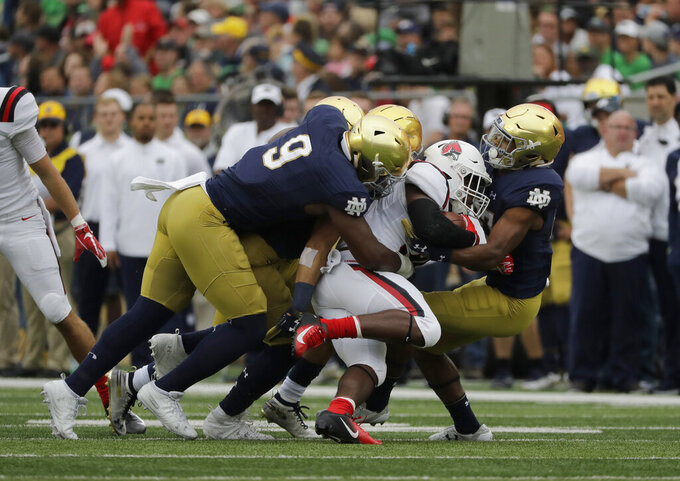 SOUTH BEND, Ind. (AP) — As Notre Dame gets set to welcome the nation’s No. 1 team, the Fighting Irish do so with a group poised to be their No. 1 defense in 40 years.

Particularly by the only measure that matters much to coach Brian Kelly.

“You know what they say about stats,” Kelly said, making a reference to the “stats are for losers” line when a question was posed about why the Irish don’t have any defensive players on the individual leaderboards.

No. 4 Notre Dame (6-0, 5-0 Atlantic Coast Conference) heads into Saturday night's showdown against top-ranked Clemson (7-0, 6-0) allowing just 10.3 points per game. That figure would be the best by an Irish team since the 1980 club finished at 10.1. That group is also the last Notre Dame team to finish better than the 267.2 yards per outing this season’s team is allowing, though by a considerable margin (213.2).

“I think it’s really just about being one of 11 out there on the field trusting our brothers to do their jobs,” defensive end Daelin Hayes said.

The Irish have allowed more than 13 points just once, in a 42-26 win over Florida State four weeks ago. In last week’s 31-13 victory at Georgia Tech, the Yellow Jackets cashed in a 93-yard fumble return for a touchdown. Notre Dame's defense gave up only six points.

“We take that personally. Honestly, the six points we gave up is six too many in our minds,” said Hayes, the ACC defensive player of the week after registering two sacks and two forced fumbles against Tech.

In Hayes, linebacker Jeremiah Owusu-Koramoah and sophomore safety Kyle Hamilton, the Irish have at least one game-wrecker along all three levels of their defense, and maybe more.

Owusu-Koramoah is being projected as an NFL first-round draft pick and “you don’t get many players of (Hamilton’s) caliber,” Kelly said.

If Hayes continues his recent surge, “we’re going to get to where we need to be,” the coach added.

Notre Dame's defensive starters for this week’s game include four graduate students, four seniors and two juniors. The Irish have logged 50 tackles for loss, 17 sacks and seven takeaways over six games, with the depth evident by virtue of 13 different players already having two or more TFLs.

"That’s what you expect when you see a team that’s ranked fourth in the country.”

Of course, none of that has come against a team like Clemson, which is averaging 46.1 points per game.

Kelly emphatically calls the Tigers’ versatile Travis Etienne “the best running back in the country,” and while Heisman Trophy candidate Trevor Lawrence will miss the game due to a positive COVID-19 test, his replacement, D.J. Uiagalelei, is the nation’s top-regarded freshman quarterback.

In his first collegiate start last week, Uiagalelei completed 30 of 41 passes for 342 yards with two touchdowns against no interceptions while leading Clemson to a 34-28 comeback win over Boston College.

“We want to disguise a lot,” Owusu-Koramoah said of how the Irish plan to counter Uiagalelei. “We want to give him things he hasn’t seen before, do whatever it takes. He’s a great quarterback. I don’t think he’s much of a down step (from) Trevor.”

With or without Lawrence, this game has been on the mind of Notre Dame's defenders for some time. Some of the players were on the roster in December 2018, when Lawrence and No. 2 Clemson blew out No. 3 Notre Dame 30-3 in a College Football Playoff semifinal and went on to win the national championship. That Irish defense was also highly regarded.