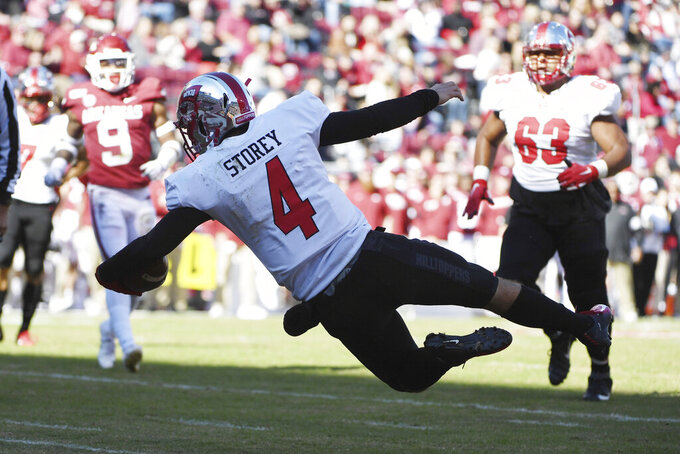 Western Kentucky quarterback Ty Story dives into the end zone to score a touchdown against Arkansas during the first half of an NCAA college football game, Saturday, Nov. 9, 2019 in Fayetteville, Ark. (AP Photo/Michael Woods)

FAYETTEVILLE, Ark. (AP) — Ty Storey, the son of a football coach and school administrator, has stoically answered questions from the media since his days as a high school All-American quarterback. It's how he was taught.

And while his words stayed dry and plain after he led Western Kentucky to a 45-19 win over his former team, Arkansas, on Saturday, his expression belied those remarks.

Storey, who lost his job as Arkansas starting quarterback in 2018, transferred to Western Kentucky after that season. His performance against old mates — 22 for 32 for 213 yards with a touchdown and two more on the ground — was the primary reason he gained his redemption. As to whether he felt some schadenfreude, the facade cracked with a toothy grin and a touch of blush.

"I'm playing for WKU. I hope the best for them," Storey said. "I hope they win out and do what they can. Right now, I have too much to focus on in Bowling Green."

Storey was the most heralded in-state quarterback recruit Arkansas had netted in a generation. He was a Parade All-American and two-time Gatorade and Wendy's Player of the year in the state. And while it may have taken five years, he made an impression on the Razorbacks. He also may have been a harbinger of Arkansas coach Chad Morris' future.

Arkansas didn't stop Storey or the Hilltoppers one time in the first half. Touchdown drives of 42, 75, 59, 73 and 68 yards paced Western Kentucky to a 35-7 halftime lead.

"I think when you look at the outcome today, it is very disappointing for all of us," Morris said. "We're trying to find the right fix right there. It was disappointing with the effort and has been over the last couple weeks."

Arkansas (2-8) is just 4-18 since Morris was hired to replace Bret Bielema in December 2017. The Razorbacks haven't won a single SEC game and are just 4-4 in nonconference games, including losses to Colorado State, North Texas, San Jose State, and Western Kentucky. A win over the Hilltoppers wouldn't have signaled changing fortunes for the beleaguered coach, necessarily, but a loss served only to further curiosity and speculation about his job security.

A majority of the questions in the post-game press conference involved his future.

Morris, using his third different starting quarterback of the season, still hadn't found an answer at the position. Freshman John Stephen Jones, grandson of Dallas Cowboys owner and former Razorbacks player Jerry Jones, was making his first start of the year. He was ineffective and, too, was swapped out for freshman K.J. Jefferson, whose debut against Mississippi State the week before provided the loudest cheers in Arkansas' 54-24 loss that day. Together, the two freshmen combined to go 9 for 25 for 87 yards and two interceptions. Jefferson's pick-six in the fourth quarter provided the final Western Kentucky points of the day.

Rakeem Boyd's 76-yard touchdown run on the Razorbacks' second series of the game tied the game, 7-7, before Western Kentucky scored the next 31 points. Boyd added another touchdown on an 86-yard run in the fourth quarter and finished with 185 yards on eight carries.

But even an average offensive day wouldn't have been enough for Arkansas. Already down 21-7 midway through the second quarter, Jahcour Pearson broke through the Arkansas secondary unseen. Storey floated him an easy ball over the middle and he ran without a Razorbacks player within 10 yards to the end zone for a 69-yard touchdown.

Western Kentucky coach Tyson Helton was somewhat worried Storey may come out too hyped against his former team, though that was his only concern. A pass like the one thrown to Pearson could have been overcooked with a nervy performance. It wasn't.

"You couldn't write it any better. It was a heck of a story," Helton said. "He (Storey) was locked in from the get-go. He wanted this one really bad. Thought he handled everything to perfection."

The attendance on Senior Day was 42,985, almost 10,000 fewer than the previous low since Donald W. Reynolds Razorback Stadium expanded in 2001. The total is the lowest in the stadium in any capacity since 1997 against Mississippi State. That was then-coach Danny Ford's last game in Fayetteville.

Morris, whose Razorbacks have an off week before finishing at LSU and in Little Rock against Missouri, is staring at the possibility of a similar fate.

For now, he remains in charge.

"I knew that this was going to be a rebuild. I knew it when I took the job," Morris said. "I knew from just looking at all the other SEC programs and looking at what we have to get and where we have to recruit to to get this program where it needs to be. That was part of the reason why I got the job is because of our recruiting and footprint. That hasn't changed and it's not going to change."

Western Kentucky: The Hilltoppers are bowl eligible with two games remaining. Western Kentucky has only suffered a regular-season losing record once, last year, since 2010.

Arkansas: Morris' job security will be under more scrutiny than ever as Arkansas is in danger having the two worst seasons in school history in his two years.

DECISION TO BE MADE

Morris was asked whether athletic director Hunter Yurachek had spoken with him at point in the recent weeks about Morris' future at Arkansas.

If Morris were to be dismissed after the season or sooner, his stint would be the shortest by a non-interim coach at Arkansas since 1942.

For the second consecutive week Arkansas hosted the smallest crowd at Donald W. Reynolds Razorback Stadium in 18 years. The dwindling attendance and associated money lost because of it, coupled with a recent $160 million renovation to the stadium, is likely to weigh into any decisions to retain or fire Morris.

Boyd has been Arkansas' best player all season. He entered the game third in the SEC in rushing, averaging 91 yards per game. His 185 Saturday lifted him above 1,000 yards rushing on the season and making him the first player since Rawleigh Williams III in 2016 to reach that mark.

Western Kentucky: Storey and the Hilltoppers travel to Southern Miss in two weeks after a bye where a win would almost certainly provide for a postseason berth.

Arkansas: The Razorbacks travel to Baton Rouge to play LSU in two weeks. The Tigers have been ranked each time the teams have met since 2008, including five times in the top 10, where LSU will almost assuredly be at kickoff Saturday, as well.