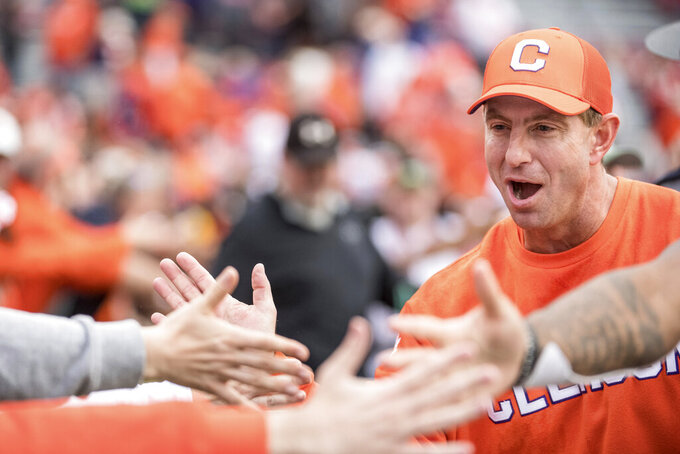 CHARLOTTESVILLE, Va. (AP) — The offenses are deservedly getting a lot of attention heading into Saturday night's clash between Clemson and Virginia in the Atlantic Coast Conference championship game.

But the defenses shouldn't be overlooked. They are mong the league’s best and will play a role in who walks off the field with the title in Charlotte, North Carolina.

The defending national champion Tigers (12-0) lead the ACC in scoring (45.3 points per game) and in numerous defensive categories, including scoring (10.1 points per game). The Cavaliers (9-3) also feature a stout defense; they are second in scoring (33.7 ppg) and fourth in scoring defense, allowing 23.5 ppg.

In any winner-take-all game, defenses can provide a turning point because mistakes can be magnified.

While Virginia is a program on the rise, Clemson is already one of the nation's elite programs.

The Tigers have won two of the last three national championships and have the kind of roster Virginia coach Bronco Mendenhall is trying to build in his fourth season. Clemson's program is one where departures are not so much a cause for concern because there are replacements ready to go.

The Tigers had to replace seven starters off last year’s team and don’t appear to have lost anything.

“It looks to me like the understudies that were the backups a year ago — when you look statistically — and most teams haven’t scored more than 10 points, haven’t reached 300 yards — it appears that they just picked up where they left off,” Mendenhall said.

Proving doubters wrong has been among the most satisfying aspects of the season for the Tigers' defense, Clemson linebacker James Skalski said.

“It’s weird and also looking back at the expectations, the narrative people have talked about, the team we were supposed to be, outscoring people,” Skalski said. “But we’ve just kept our head down. We’ve know what we’ve had this whole time and we’ve just bought into the process of preparing people and it showed.”

Mendenhall is a defensive coach, and his team’s play has gained an admirer in Clemson coach Dabo Swinney.

“You can just tell that he believes in the fundamentals of the game, and not beating yourself,” Swinney said.

Virginia entered this season looking to improve its run defense, and has made progress. It ranks fourth in the ACC, allowing 123.3 yards per game, but faces its biggest test on Saturday. Clemson's Travis Etienne ranks third in the conference with 115.5 yards per game and leads all ACC rushers with 16 touchdowns on the ground.

“With that O-line, Travis Etienne, they are very, very capable, very, very good. We got a tall order ahead of us,” Virginia defensive end Eli Hanback said.

Virginia’s front seven has been among the most disruptive in the nation. It ranks second in the ACC in sacks with 43 — Clemson isn’t far behind with 36 — and flexed its muscles at the end of its victory against the Hokies, sacking Hendon Hooker on three consecutive plays, the last forcing a fumble and a game-clinching defensive touchdown.

That pressure also has become more necessary as the Cavaliers have lost several defensive backs, including Bryce Hall, a first team All American last season.

Instead of a cause for concern, though, defensive end Mandy Alonso said Virginia's inexperienced secondary highlights a trust that exists among everyone on the defense.

“Ït’s awesome that we can rely so heavily on people that didn’t start the season off in starting roles," Alonso sand have emerged as real time players,” he said.