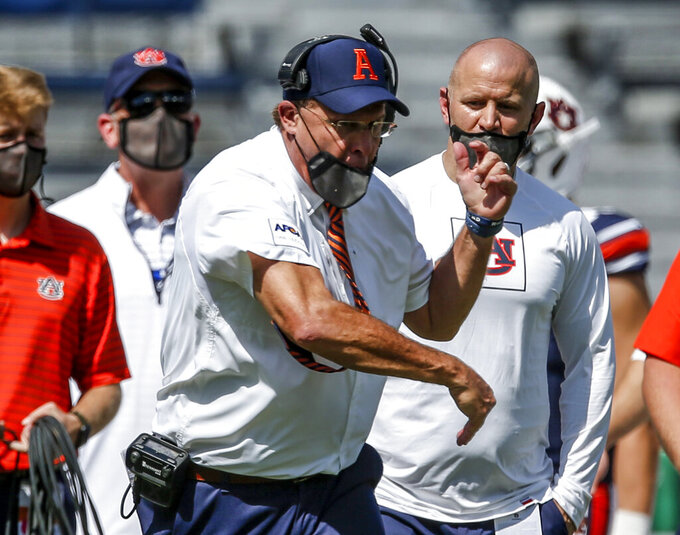 Auburn head coach Gus Malzahn reacts to a call during the second quarter of an NCAA college football game against Kentucky on Saturday, Sept. 26, 2020, in Auburn, Ala. (AP Photo/Butch Dill)

ATHENS, Ga. (AP) — The Deep South's oldest rivals usually tangle deep into fall, long after the leaves have turned and talk has turned to conference titles and postseason games.

It just doesn't seem right for Georgia to be facing Auburn at this time of year, when the college football season is just getting started, the dog days of summer still fresh in everyone's minds.

While the timing seems off, the ramifications for Saturday night's showdown at Sanford Stadium are downright familiar.

No. 4 Georgia (1-0) still trying to settle on a quarterback but has another deep, talented squad that expects to be part of the national championship race.

Ditto for No. 7 Auburn (1-0), which is eyeing its first league championship since 2013 and, by extension, making a run at the College Football Playoff.

There are certainly no off weeks with the Southeastern Conference playing a 10-game, league-only schedule because of the coronavirus pandemic.

In Week 1, Georgia rallied from a sluggish first half for a 37-10 victory at Arkansas, while the Tigers pulled away from then-No. 23 Kentucky 29-13.

“Usually when we have the regular schedule, we have these easy teams,” Bryant said. “So when you jump off playing teams like Kentucky and Georgia and you do good, you get instant credibility. I look forward to games like this.”

The biggest issue heading into this game is who will play quarterback for the Bulldogs.

Redshirt freshman D’Wan Mathis started against the Razorbacks in his first college game, but he was yanked after completing just 8 of 17 passes for 55 yards. Junior Stetson Bennett, a former walk-on, sparked the offense in the second half, finishing 20 of 29 for 211 yards and a pair of touchdowns.

Then there's former Southern Cal starter JT Daniels, who has finally been cleared to play after recovering from a serious knee injury.

Daniels was one of the nation’s most highly recruited quarterbacks coming out of high school and just the second true freshman to start his first college game for the Trojans. He transferred to Georgia after missing most of 2019.

Coach Kirby Smart won't rule out using multiple quarterbacks, and he's certainly not given up on Mathis.

“He’s getting better. He’s growing as a player. He has learned from some of his mistakes, and (we’re) trying to get the players around him to play better too so that allows him to have success," Smart said. "Really the same thing with JT. He’s continuing to work. He’s doing a great job — glad he’s cleared because he is able to play now. We’re excited to see him and see what he does.”

Auburn is prepared to adjust if Daniels winds up in the game for the Bulldogs.

“In a way, it’s like another first game preparation,” coach Gus Malzahn said. “Last week, I thought our defense adjusted well in the second half. If they end up playing him, it could be a little bit of a period of time to adjust on what their plan is.”

Other things to watch for when Georgia hosts Auburn between the hedges:

Georgia hasn't lost at home to Auburn since 2005, but this year will certainly be different.

Instead of the usual crowd of almost 93,000 fans, the Bulldogs will limit the turnout to around 20,000 socially distanced fans because of the pandemic.

“It’s a unique year,” Malzahn said. “I think everybody’s learning as they go, but I do expect it to be loud.”

With all schools limiting crowds, road teams went 5-2 in the first week of SEC games.

Nix pushed it to 218 against Kentucky, behind Clemson’s Trevor Lawrence (276). He attempted a career-high 50 passes in last year’s loss to the Bulldogs, completing 30 for 245 yards and a touchdown.

With the quarterback situation unsettled, it will be imperative for the Bulldogs to get plenty of production out of their running game.

Georgia doesn't have a clear-cut No. 1 back like past years, but there's plenty of depth.

Zamir White led the way against Arkansas with 71 yards on 13 carries, James Cook had seven carries for 26 yards, while Kenny McIntosh ran it five times for 20 yards. Kendall Milton and Daijun Edwards also got one carry apiece.

Auburn is still smarting a bit from last year's 21-14 loss to Georgia at Jordan-Hare Stadium,

“We kind of let it slip from us last year over here at our house,” Bryant said. “Man, it’s going to be real big just to go over there and take that win. Take that win. That’s what I’m looking forward to.”

Auburn has fared well when both teams have been ranked in the Top 10 heading into this rivalry game.

By Hank Kurz Jr. 18 minutes ago
By Ralph D. Russo an hour ago
By Pat Graham 3 hrs ago
By Tanner Marlar 9 hrs ago
By Steve Reed 9 hrs ago