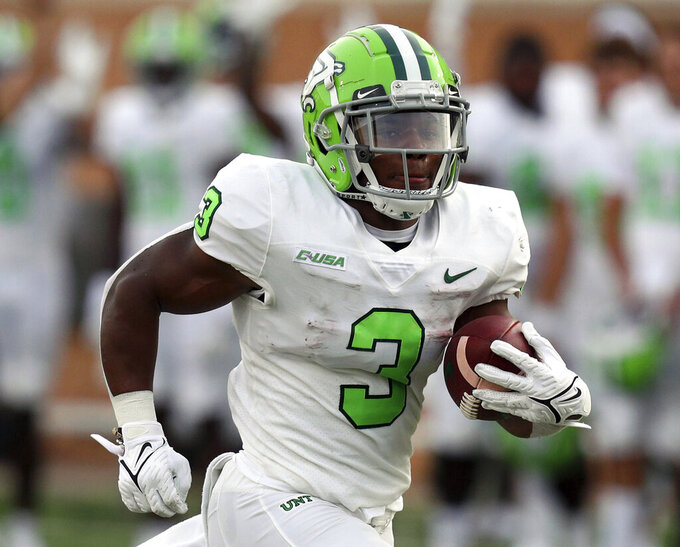 FILE - North Texas running back DeAndre Torrey carries the ball on a touchdown run against Northwestern State during an NCAA football game Sept. 4, 2021, in Denton, Texas. Torrey is in the top 10 among active running backs in FBS with 3,228 yards rushing (ninth) and 36 touchdowns on the ground (sixth). He's also sixth in all-purpose yards (4,775). (AP Photo/Richard W.Rodriguez, File)

Line: Miami by 3, according to FanDuel Sportsbook.

North Texas is going for its first six-game winning streak since 2004, when it won seven in a row. The Mean Green also are trying to build on the school's second-ever victory over a Top 25 opponent, which clinched the bowl bid. North Texas ended then-No. 15 UTSA's perfect season at 11-0 with a 45-23 win. Miami is trying to end a 31-game losing streak against nonconference FBS opponents since beating Army in 2011. This game was a late addition by the NCAA, in early December. It technically replaces a bowl game scheduled for San Francisco that was called off in September.

Miami vs. the grass. The Redhawks haven't played on a grass field since Sept. 4, 2010, at Florida. And it could be a little rough given it's set to be the second bowl game in three days at Toyota Stadium, home of FC Dallas in MLS. No. 24 UTSA and San Diego State were picked for the regularly scheduled Frisco Bowl.

North Texas: DeAndre Torrey is in the top 10 among active running backs in FBS with 3,228 yards rushing (ninth) and 36 touchdowns on the ground (sixth). He's also sixth in all-purpose yards (4,775).

Miami (Ohio): QB Brett Gabbert is the younger brother of Blaine Gabbert, who is Tom Brady's backup in Tampa Bay and was the 10th overall draft pick by Jacksonville in 2011. The younger Gabbert has thrown for 1,475 yards and 15 touchdowns in the past four games.

Both teams are trying to finish with a winning record. It would be just the seventh for North Texas since returning to FBS in 1995. Miami has just two winning seasons since a run of 11 in a row from 1995-2005. ... Miami leads the Mid-American Conference with seven bowl victories, the most recent coming in the 2010 GoDaddy.com Bowl, 35-21 over Middle Tennessee State. ... North Texas is 0-4 in bowls under sixth-year coach Seth Littrell, who has a 37-37 record. ... The Redhawks were 4-26 in coach Chuck Martin’s first 30 Mid-American Conference games. They are 30-12 since, the best record in the conference in that span. ... LB KD Davis has led the Mean Green in tackles for three consecutive seasons. ... Miami WR Jack Sorenson, a sixth-year player, is eighth nationally with 1,290 yards receiving.