Stroud is frontrunner as freshmen battle for Buckeyes QB job 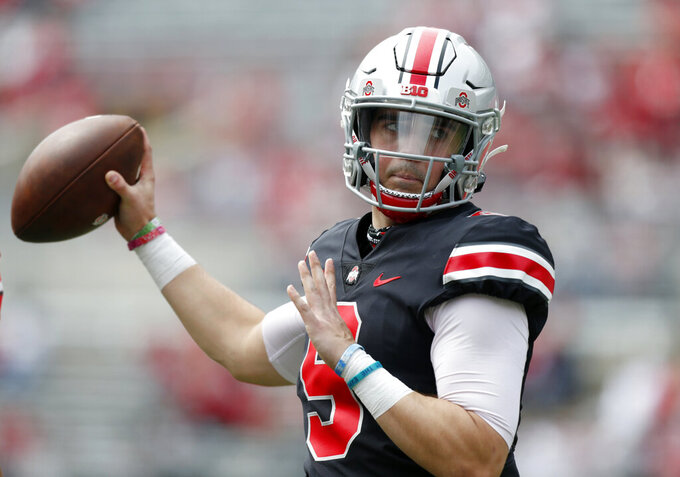 FILE - Ohio State quarterback Jack Miller throws on the sideline during an NCAA college spring football game in Columbus, Ohio, in this Saturday, April 17, 2021, file photo. Third-year Ohio State coach Ryan Day opens a preseason camp for the first time without a good idea of who will be the starting quarterback.(AP Photo/Paul Vernon, File)

COLUMBUS, Ohio (AP) — None of the three freshmen competing to start at quarterback for No. 4 Ohio State has thrown a pass in a college football game.

That's unfamiliar and unsettling for third-year Ohio State coach Ryan Day, who had the luxury of the record-shattering Justin Fields running the offense the past two seasons.

Day revealed Monday that the frontrunner to start is C.J. Stroud, a 6-foot-3, 218-pound redshirt freshman from Rancho Cucamonga, California, who played sparingly last year in mop-up duty. Stroud has moved in front of Jack Miller, a member of that same 2020 recruiting class, and freshman Kyle McCord.

“I don't know how much separation there is. I'm not sure,” Day said. “But I'll say that every day (Stroud's) been competing, he's been taking care of the football, making good decisions, he's been a leader. And those are all some of the traits we're looking for.”

The wildcard is Quinn Ewers from Southlake, Texas, the No. 2 high school prospect in the 2022 class who decided to forgo his senior season and come to Ohio State to take advantage of endorsement offers via new NIL rules. Ewers is enrolled and is going through the process to be eligible to play this season.

Day is trying to impress upon the freshmen the sometimes crushing responsibility that comes with the top QB position at Ohio State.

“I try to tell them all the time if you can survive practice with me kind of getting after you, the games will be easy,” he said. "That’s sometimes hard on those guys. I try to help them understand how hard it is to win a game and to play quarterback at this level.

“Our expectation here is Heisman Trophy, national championship," he said. "The pressure has never been higher for those guys, and they understand."

KEYS TO THE CAR

Whichever freshman wins the job will have an outstanding supporting cast, including receivers Chris Olave and Garrett Wilson, possibly the best wideout tandem in college football. Master Teague III returns as the top incumbent running back, but he's being pushed by others, including freshmen Miyan Williams and TreVeyon Henderson.

“They got a nice little vehicle to drive," offensive coordinator Kevin Wilson said of the QB candidates. "We’ll see who can put their hands on and steer it the best.”

Ohio State's offensive line is massive and talented. There is experience in Thayer Munford, who is being switched from tackle to guard, Harry Miller at center and Nicholas Petit-Frere at left tackle. Camp has been buzzing about 6-foot-8, 360-pound Dawand Jones, a junior who could win the starting job at right tackle.

“I got 10 guys (who can play),” offensive line coach Greg Studrawa said. “I think the backups would start at a lot of places.”

ON THE OTHER SIDE

The Buckeyes' defensive line will be anchored by tackle Haskell Garrett, who took advantage of an extra year of eligibility offered due to the pandemic. He emerged as a star and leader last season after being shot in the face on the street last summer. Safety Josh Proctor and cornerback Sevyn Banks, both seniors, lead the secondary. The Buckeyes will have three new starters at linebacker.