Struggling Auburn tries to bounce back at Mississippi 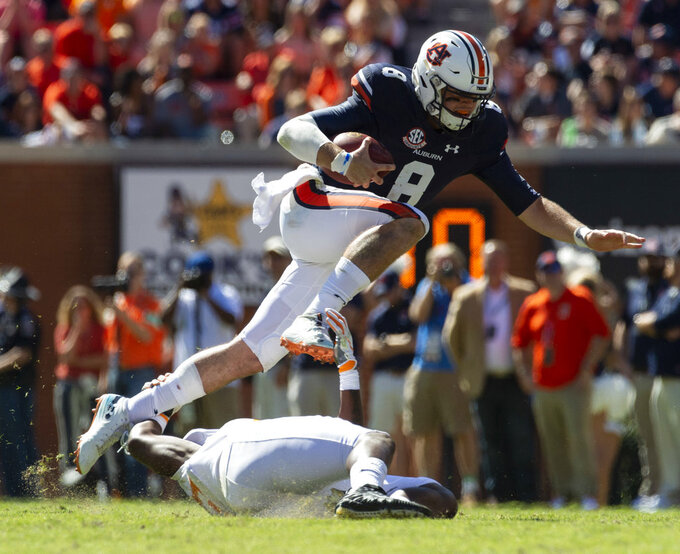 Auburn quarterback Jarrett Stidham (8) gets loose during the second half of an NCAA college football game against Tennessee, Saturday, Oct. 13, 2018, in Auburn, Ala. (AP Photo/Vasha Hunt)

OXFORD, Miss. (AP) — Auburn's season has turned sour after three losses in the past five weeks ended any talk of a Southeastern Conference title.

Now the Tigers are trying to finish the regular season strong, starting with Saturday's game at Mississippi.

It's a new situation for Auburn (4-3, 1-3 Southeastern Conference) which was ranked No. 8 in the country just two weeks ago before losses to Mississippi State and Tennessee sent them tumbling from the rankings.

Ole Miss, on the other hand, has known there would be no dream ending to its season for quite a while. The program is in the second year of a two-year postseason ban as part of their punishment from an NCAA rules infractions case.

All things considered, the Rebels (5-2, 1-2) are still in relatively good spirits going into Saturday's game. They rallied to beat Arkansas 37-33 last weekend for their first conference win of the season.

Auburn hopes to get its offense going against an Ole Miss defense that ranks near the bottom of the SEC in several statistical categories.

"It's easy to have your teammates' back whenever anything is going good but you really find out who has your back when it's going the way it is now," Auburn defensive tackle Dontavius Russell said. "I feel like this is the most important time for us to really play together."

Here are a few more things to watch when the Rebels host the Tigers on Saturday:

The Ole Miss trio of receivers that calls itself the Nasty Wide Outs (NWO) is now down to a duo. D.K. Metcalf is out for the rest of the season after suffering a neck injury against Arkansas. The Rebels still have A.J. Brown and DaMarkus Lodge, who rank second and sixth respectively in the SEC in yards receiving. Other receivers who could step up in Metcalf's absence are sophomore Braylon Sanders and freshman Elijah Moore.

A QB WHO CAN DO BOTH

Ole Miss quarterback Jordan Ta'amu is mostly known for his throwing and leads the SEC with 2,298 yards passing. But the senior can also run, and his 141 yards rushing vs. Arkansas last weekend were the most in a game for a Rebel quarterback since 1979.

Auburn is sticking with struggling quarterback Jarrett Stidham with no proven backups behind him. Stidham has struggled most of the season and threw for two interceptions against Tennessee, which also returned his fumble for a touchdown in a 30-24 win.

Auburn has several players trying to return from injuries, including leading rusher JaTarvious Whitlow, defensive end Marlon Davidson and cornerback Jamel Dean. Safety Jeremiah Dinson must sit out the first half for a targeting penalty.

Auburn's running game has been one of the league's least productive even with Whitlow in the lineup. Kam Martin, Malik Miller and Shaun Shivers would likely split most of the carries if Whitlow can't play. Freshman Asa Martin has also seen limited action in four games, but won't be able to redshirt if he plays in another.