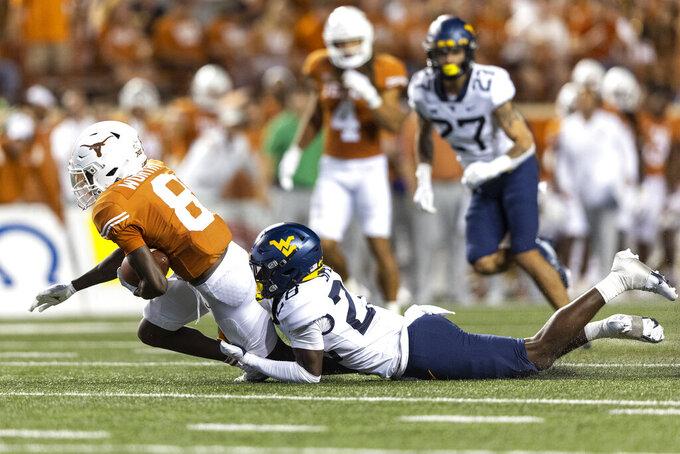 Line: Texas by 7 according to FanDuel Sportsbook.

Oklahoma, the long dominant power in the Big 12, is desperate to avoid an 0-3 start in league play in coach Brent Venables' first season and the Sooners look in disarray after two straight losses. Texas can climb back in the thick of the conference title chase with a win that would snap a four-game skid against its longtime rival.

Texas wide receiver Xavier Worthy vs. the Oklahoma secondary. Worthy ate up the Sooners last season with 261 yards and two touchdowns and is now just hitting his stride in 2022, with two touchdowns a week ago against West Virginia. Oklahoma's corners and safeties were caught far out of position on several TCU touchdowns last week. Lose track of Worthy and he will score a lot again.

Oklahoma: WR Marvin Mims. Oklahoma quarterback Dillon Gabriel might miss the game with a concussion, and Davis Beville, General Booty or Nick Evers could all see action. Whoever gets the call has a prime target in Mims. He has 22 catches for 438 yards and three touchdowns this season. He had five catches for 136 yards and two scores last season against Texas.

Texas: Freshman QB Quinn Ewers. He's expected to return after missing three and a half games with a clavicle injury. Ewers has a slingshot arm that makes the deep throws look effortless. But he also hasn't played in a month, and he's never played in the circus of the Cotton Bowl during the State Fair.

This is the first time since 1998 that neither team is ranked in this matchup ... The Sooners have won three straight in the regular-season series and four straight overall against the Longhorns. Oklahoma won 55-48 last year — rallying from a 28-7 deficit — and 53-45 in overtime the year before.