Struggling teams meet when TCU heads to Kansas on Saturday 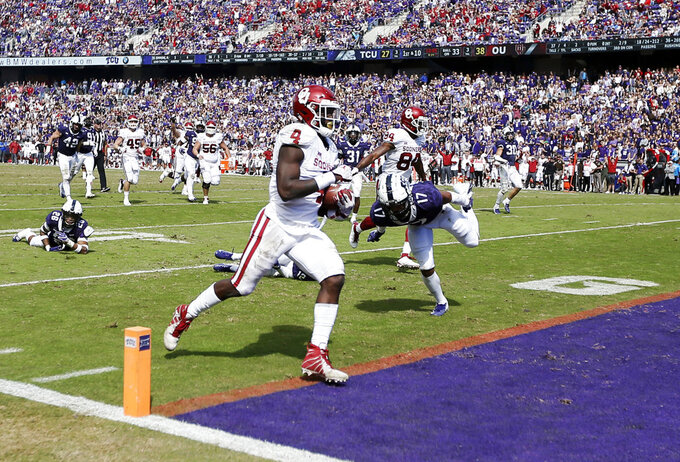 Oklahoma running back Trey Sermon (4) scores a touchdown during the second half of an NCAA college football game against TCU, Saturday, Oct. 20, 2018, in Fort Worth, Texas. Oklahoma won 52-27. (AP Photo/Brandon Wade)

LAWRENCE, Kan. (AP) — Kansas is accustomed to muddling through long losing streaks in the Big 12.

It's a much rarer and just as unwelcome occurrence for TCU.

The Horned Frogs have dropped two straight and four of their last five, including last week's blowout loss to Oklahoma. Their most dynamic playmaker was just booted off the team and, at 3-4 and 1-3 in the Big 12, coach Gary Patterson's team faces a tough road to reach bowl eligibility.

That path begins with Saturday's visit to the Jayhawks.

"Well, being 3-4, I'm going to tell you that I'm not real happy," said Patterson, whose team will be venturing outside the state of Texas for the first time this season. "I don't care where we play as long as we win. You spell fun W-I-N. You don't spell it any other way."

Winning is more fun than some of the stuff Patterson has dealt with this week.

On Tuesday, he announced that wide receiver KaVontae Turpin had been dismissed from the team following an assault charge over the weekend. Turpin has three touchdown receptions this season, led the nation in punt returns and had a 99-yard kickoff return against the Sooners.

That decision came a day after Patterson announced that quarterback Shawn Robinson will have season-ending surgery. Michael Collins will take over after playing well at times against Oklahoma. Oh, and starting corners Julius Lewis and Jeff Gladney may or may not play this week.

"First of all, it's most important that we stay positive. Negativity is very contagious," TCU offensive tackle Anthony McKinney said. "It's really important to make sure that as a team that we're all keeping each other high and lifted."

The Horned Frogs have the perfect get-right opponent coming up in Kansas.

The Jayhawks (2-5, 0-4) have lost four straight after a blowout win over Rutgers. Along the way, coach David Beaty fired offensive coordinator Doug Meacham and has continued to go back and forth with his starting quarterbacks, preventing the Jayhawks from finding any offensive rhythm.

"It's going to be a challenge, but our guys are certainly up for it and coming out of last week the things that we need to fix are very fixable," Beaty said. "I know that our procedure is much improved. I know our guys feel much more comfortable.

"I know we will do nothing but improve from there. I'm excited to get them back on the field."

The Horned Frogs' new quarterback developed a blister on his hand that affected him in the second half against Oklahoma. "Most people couldn't have even grabbed (the ball)," Patterson said. "They've done a great job this week rehabbing, he's throwing the ball back the way he was. I think it affected him quite a bit in the second half."

"The whole Shawn thing, it's unfortunate," McKinney said. "Coach P always says next man up. That's our philosophy. We don't feel any different, our job isn't changed, our job still stays the same, protect the quarterback with any means necessary."

TCU blew out the Jayhawks 43-0, but most of their recent contests have been relatively close. The Horned Frogs won 24-23 the last time they were in Lawrence, and four of the past five games have been decided by 10 points or fewer.

Kansas safety Mike Lee was tossed from last week's loss to Texas Tech for targeting, and he was fairly honest about what he did upon returning to the locker room.

The Jayhawks haven't played at home since losing to Oklahoma State on Sept. 29. They had road games against West Virginia and the Red Raiders sandwiched around a week off.

"It'll be good to get back into Memorial Stadium, and be back in front of our crowd, kind of where we're comfortable and stuff like that," Kansas linebacker Joe Dineen Jr. said. "I'm excited to get back home."