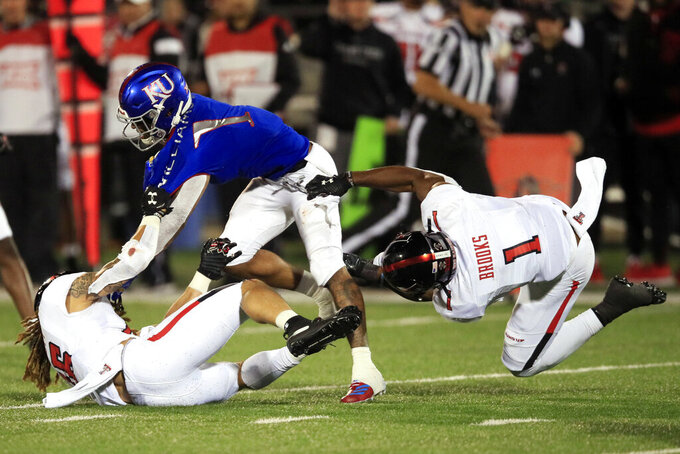 The winner will prop up fading bowl hopes. The loser joins idle Kansas (3-6, 1-5) in the league cellar.

Texas Tech has dropped three in a row, including narrow losses to Kansas and Baylor .

"We need to find a way to win close games here in the month of November," said Texas Tech coach Matt Wells.

The Mountaineers, who are playing their first home game in a month, have lost four straight but are coming off one of their best defensive efforts of the season.

"All teams are judged and kind of remembered for how they finish. This is our opportunity," said West Virginia coach Neal Brown, who was the offensive coordinator and quarterbacks coach at Texas Tech from 2010-12.

Brown will need his offense to step it up. The Mountaineers were limited to 219 total yards at Baylor, with 83 coming on one pass play. Only two FBS teams average worse than West Virginia's 78.9 rushing yards.

West Virginia has scored a Big-12 worst 22 touchdowns. Texas Tech is next at 29.

On defense, the Mountaineers have been picked apart by mobile quarterbacks this season and they'll see a familiar face in Texas Tech's Jett Duffey, who ran for 86 yards last year in a 42-34 loss to the Mountaineers. The junior has amped up his passing game, averaging 324 yards in his last four games with nine touchdowns and two interceptions.

"He's been very stingy with the football and given us a chance in every game, really, and I think that's the mark of a good quarterback," Wells said.

Both teams must win three of their final four games to become bowl eligible.

Some other things to know about Saturday's Texas Tech-West Virginia matchup:

Nick McCann blocked a 40-yard attempt by Liam Jones of Kansas, and Texas Tech teammate Douglas Coleman picked up the loose ball before attempting a lateral that the Jayhawks recovered. Jones then kicked a 32-yarder to win it.

West Virginia's Casey Legg kicked the ball through the uprights on a 43-yard field goal attempt late in the fourth quarter against Baylor, but the Mountaineers were penalized for delay of game and had to try again. The Bears' Bravvion Roy then blocked Legg's 48-yard attempt.

Wells said quarterback Alan Bowman, who has missed five games since injuring his non-throwing shoulder against Arizona on Sept. 14, remains unavailable until team doctors give him the clearance to play. Bowman threw on the sidelines during the Kansas game. The sophomore averaged 340 passing yards in the first three games of the season before getting hurt.

West Virginia's defense is coming off an eight-sack performance against Baylor. Darius Stills is second in the league in sacks with seven and his younger brother, Dante, has six. Texas Tech's Jordyn Brooks leads the conference with 87 tackles and 15.5 tackles for loss while defensive back Doug Coleman leads the nation with seven interceptions.

Texas Tech junior defensive back Zech McPhearson, a native of Columbia, Maryland, said he has 20 tickets for Saturday and is looking for more.

"I got a lot of family coming out to this game," he said.