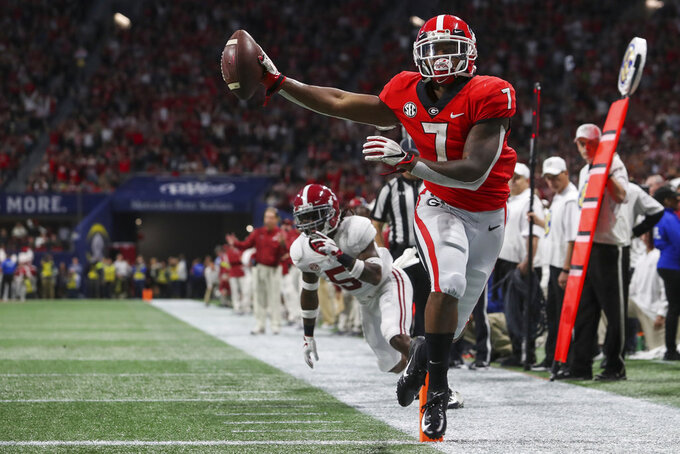 Georgia running back D'Andre Swift (7) runs into the end zone for a touchdown after a reception against Alabama during an NCAA college football game for the Southeastern Conference championship Saturday, Dec. 1, 2018, in Atlanta. (AJ ReynoldsAthens Banner-Herald via AP)

Georgia: The Bulldogs are led by running backs D'Andre Swift and Elijah Holyfield. Swift has run for 1,037 yards and 10 touchdowns while Holyfield has been nearly as productive with 956 yards on the ground and seven touchdowns.

Texas: Receiver Lil'Jordan Humphrey has caught 79 passes for 1,109 yards and nine touchdowns this season. The 6-foot-4, 225-pound junior has been quarterback Sam Ehlinger's favorite target all season. Ehlinger has thrown for 3,123 yards, 25 touchdowns and five interceptions.

Georgia: The Bulldogs are coming off a hard-fought 35-28 loss to Alabama in the SEC championship game on Saturday. The Georgia defense is giving up just 18.5 points per game this season.

Texas: Oklahoma pulled away in the fourth quarter to beat the Longhorns 39-27 in the Big 12 championship game on Saturday. Overall, it's been a breakout season for Texas, which has a chance to win 10 games for the first time since 2009. That season the Longhorns won 13 games before losing to Alabama in the BCS national championship.