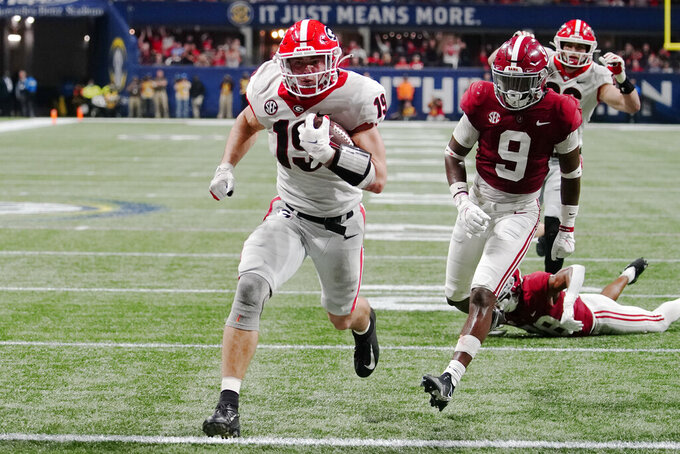 Andy Coats isn't a coach or athletic director. When it comes to the seismic changes to the landscape of major college football, though, he is a seminal figure.

Coats, the former dean of the University of Oklahoma law school, successfully argued before the Supreme Court in 1984 that the NCAA’s control of football television rights violated federal antitrust law. Justice Byron “Whizzer” White, a former running back at Colorado, told Coats back then that even though he may end up winning the case, he would regret it.

“I never did exactly regret it,” said Coats, who continues to teach at Oklahoma in a building bearing his name. “But certainly, a lot of the things that have happened have cast a dark cloud, I think, over college football.”

It's been nearly 40 years since that pivotal case and the shockwaves continue to come. The Big Ten Conference in late June announced the additions of Southern California and UCLA in 2024, setting the stage for last week’s announcement of a seven-year rights deal with Fox, NBC and CBS that will see the conference eventually receiving at least $1 billion annually.

In 2020, the SEC sold a package of football and basketball broadcast rights to the Walt Disney Co., making ESPN/ABC the home of SEC football. The 10-year deal, starting in 2024, is worth at least $3 billion and is an addition to the original 20-year, $2.25-billion agreement that began in 2014. The increased revenues helped the SEC lure Texas and Oklahoma from the Big 12, another big change set to take effect in 2025.

The Big Ten and SEC's latest salvos have ignited the debate of whether it is media companies or the conferences that are most responsible for the economic arms race. The case can be made that it’s neither and that NCAA vs. Board of Regents of the University of Oklahoma 38 years ago was the catalyst.

Coats said rights fees declined for a couple of years after the Supreme Court ruling. But as more networks became interested, the competition for dollars increased.

“I guess it was inevitable it would happen. But it has some very distressing aspects to it,” Coats said.

Both the Big Ten and SEC also saw the power of expansion. The Big Ten set the table in 1990 when Penn State joined. The SEC went a step further by adding Arkansas and South Carolina, which allowed them to split into divisions and hold a championship game beginning in 1992.

The Big Ten on Saturdays will soon look like the NFL. It will have teams from coast to coast, including the nation’s top three media markets of New York, Los Angeles and Chicago, and it will have an early game on Fox, late afternoon on CBS and prime-time on NBC.

“Linear TV may be dying in certain aspects -- you could say things like scripted dramas or sitcoms -- but for sports and news, it’s never been stronger,” said former Fox Sports President Bob Thompson. “If you want to gather a large collection of eyeballs to a singular event, for the benefit of advertisers, live sports is still the way to go.”

ESPN has been one of the largest carriers of college sports, but it has found increased competition from Fox, which has made the Noon Eastern Saturday time slot one of the most watched.

Fox had the Bowl Championship Series from 2006-10 but little coverage during the regular season. That has changed in recent years. Besides becoming the lead carrier of the Big Ten, Fox also airs games from the Big 12 and Pac-12.

“I would say there’s no question that they put a stake in the ground in creating Big Noon Saturday. They have proven that if you put the resources, muscle and quality programming behind something, you can create a very important franchise that is poised for success for many years to come,” said Tag Garson, Wasserman’s senior vice president of properties. “They don’t make decisions without a lot of debate. And when they go after something, they put the weight behind it.”

The Big Ten and SEC could see over $100 million in total media revenues per school by 2025.

“It’s amazing to think that it wasn’t that long ago when the Big Ten was able to tout that they were the first billion-dollar conference. Now it’s not $100 million a year, but it’s $1 billion a year,” Garson said. “But let’s also keep in mind that there is a competitive landscape out there the looks of which we haven’t seen before to this level. Because you now have more suitors than before.”

All the spending has sparked fresh concerns about the future of major college athletics, but those concerns are not new. In 2011, then-LSU Chancellor Michael Martin told the Knight Commission: “I think we could ultimately end up with two enormous conferences, one called ESPN and one called Fox. I’m not exactly sure what we do about it.”

“I had no idea how much staying power that response was going to have,” said Martin, now the president of Florida Gulf Coast.

The Pac-12 and Big 12 will be the next conferences to have their rights available. Both conferences are in a diminished position after losing their marquee programs and are battling each other for realignment candidates.

And then there is the ACC, whose rights don’t expire until 2036. The conference’s grant of rights carries substantial financial penalties for any schools looking to bolt.

“It seems to me that it’s inevitable that the SEC and Big Ten will just begin to dominate college football completely,” Coats said. “I think it’s worrisome. The smaller schools and conferences don’t necessarily have the alumni base. Also, because of the quality of the games, there is more natural interest toward the bigger conferences.”