Surging Pitt hopes to sort out 'Coastal Chaos' vs. Miami 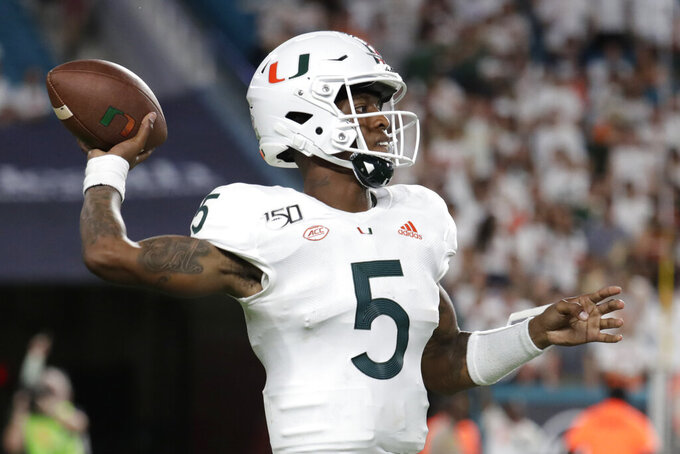 PITTSBURGH (AP) — Pittsburgh coach Pat Narduzzi brought his thumbs together to make the universal symbol for the place known as "The U."

His message was simple: Miami's brand name still carries weight, even if the Hurricanes are no longer the dominant force they were two decades ago or even two years ago.

"That's who you're playing," Narduzzi said. "You're playing that team right there. That's recognized all over the world."

And beating "The U" still matters, even if the swagger that has long defined the Hurricanes is lacking. Miami (3-4, 1-3 Atlantic Coast Conference) is a bit of a mess heading into Saturday's visit to the surging Panthers (5-2, 2-1), a tailspin that began at Heinz Field two years ago.

The Hurricanes headed into their 2017 regular season finale undefeated and ranked No. 2 in the country. They left on the wrong side of a 24-14 upset fueled by then-Pitt freshman quarterback Kenny Pickett.

Though Narduzzi downplayed the idea that his team's 2017 victory was a defining moment — pointing out the Panthers went to Miami and were drilled by the Hurricanes 24-3 — the current trajectory of both programs goes back to that sunny, chilly late-November afternoon two years ago when Pickett ran for two touchdowns and threw for another in his first career start.

Pitt used the game as a springboard to the ACC Coastal Division title in 2018 , with a legit shot at a repeat this season. The Hurricanes, meanwhile, are 10-13 over their last 23 games and are coming off a confounding overtime loss to Georgia Tech .

"We're four plays away from being 7-0, and we believe that," first-year Miami coach Manny Diaz said. "But we're not. And we understand the mistakes that have got us to where we are."

The kinds of miscues — missed field goals, penalties and defensive breakdowns — that the Panthers have largely avoided during their four-game winning streak. The Panthers have been able to relax while living in the razor-thin margins that have come to define what they call "Coastal Chaos." Pitt is 4-1 in games decided by a touchdown or less. The Hurricanes are 2-4.

"I think we're just comfortable being in that situation," Pickett said. "There's still a sense of urgency we all have when the game gets tight that we have to go out there and execute and get the win. But I'd much rather be in the situation where we run the clock out and are really not in too much stress."

Pitt would prefer the stress to be felt on the other sideline as opponents try to figure out how to deal with a defense that has developed a nasty streak that long defined the units Narduzzi put together while serving as defensive coordinator at Michigan State. The Panthers lead the country in sacks (5.14 per game) and bring pressure from all over. Fourteen players have gotten to the quarterback at least once.

"They're not just leading the country in sacks, they're lapping the field," Diaz said.

A problem the Hurricanes will have to solve no matter who is behind center, whether it's Jarren Williams or N'Kosi Perry. Miami has allowed 31 sacks through seven games. Only three teams in the country have given up more.

"We've got some guys up front that are just playing relentless," Narduzzi said. "I just see the pockets collapsing. A couple of those, you see the pocket get collapsed. That's when everybody is doing the right thing."

Miami's kicking issues are deep. The Hurricanes have made just 6 of 13 field goals on the season while alternating between Turner Davidson (1 for 3) and Bubba Raxa (5 of 9). They're not just missing the long ones either. Four of Miami's seven misses have been on kicks shorter than 30 yards.

Pitt's running game finally found some traction in last week's victory over Syracuse. A.J. Davis ran for a career-high 103 yards and a touchdown against the Orange, doing enough for Narduzzi to lift the "OR" on the depth chart between Davis' name and backups Todd Sibley Jr. and V'Lique Carter. A little balance could go a long way for a team that has relied heavily on Pickett's right arm to keep it competitive.

"Do I want to be balanced? Yes," Narduzzi said. "I think it makes both phases better. It keeps the defense off track. I think we have to be balanced to win a championship and have a chance to talk in those terms. But week by week, whatever it takes to get it done."