Surging Purdue has Michigan State up next 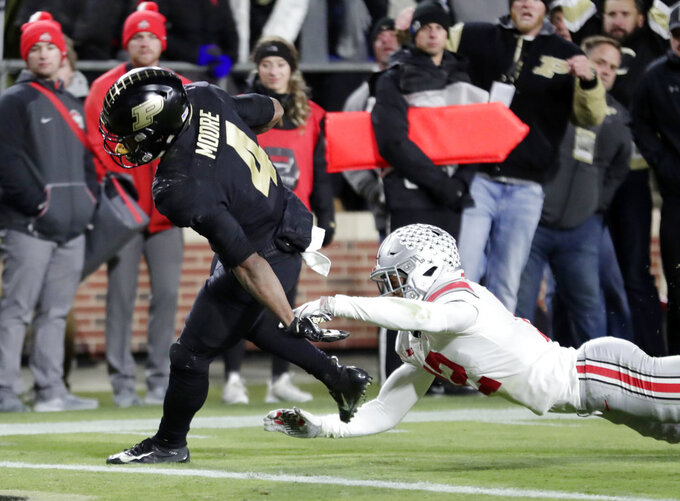 That's what Purdue and coach Jeff Brohm would like to avoid.

For the Boilermakers, last weekend's win over Ohio State raised the stakes. After four straight victories, they now have a lot to play for. A division title is a possibility for Purdue, but Saturday's game at Michigan State could be a tough one for a team trying to avoid a letdown after last week's celebration.

"You were just excited and happy about what just took place. You didn't want the day to end," Brohm said. "You know it would be great to end the season that way but we've got more games to play and a lot more work to be done."

Purdue (4-3, 3-1 Big Ten) routed Ohio State 49-20 and has scored at least 40 points in three straight games. Now the Boilermakers take on a Michigan State team that's coming off an emotional 21-7 loss to rival Michigan. There was acrimony before, during and after that game, but that's in the past now.

Not only did Michigan State (4-3, 2-2) lose to Michigan, but the Spartans also endured another significant injury in a season full of them. Receiver Felton Davis is out for the season after going down with an Achilles tendon injury.

A few things to watch when Michigan State hosts Purdue:

THREE FOR THE ROAD

Purdue's four-game winning streak includes victories at Illinois and Nebraska, which marked the first time in six years the Boilermakers won back-to-back conference road games. The win over Ohio State was at home.

The last time the Boilermakers won three straight Big Ten road games was when they won at Michigan and Indiana in 2009 and then opened the 2010 conference slate with a win at Northwestern. Brohm isn't caught up in all that.

"We know this team (Michigan State) will come ready to play and if we don't play well, we'll get blown off the field," Brohm said. "We have to do all the small things to give ourselves a chance to win and we're going to work very hard to do that."

It's no secret that Michigan State puts a big priority on beating Michigan, but under Dantonio, the Spartans are 9-2 in the game after facing Michigan. They'll try to improve that record some more this week.

The Cradle of Quarterbacks has produced multiple Super Bowl winners and even the NFL's career leader in yards passing.

But David Blough has a chance to do something this week that none of his Purdue predecessors could — throw for more than 300 yards in a fourth consecutive game.

Jim Everett and Drew Brees each had two three-game streaks, with both of Everett's coming in 1985. Brees first achieved the feat in 1998 and matched it a year later. The only other quarterbacks with such a streak are Curtis Painter in 2007 and now Blough.

"He's played a lot of football here last year and been very successful, and I think he's got a live arm and I have a lot of confidence in him," Dantonio said Tuesday. "Not that I don't have confidence in the other guys, but we're going to play the guys that we think are the best players at a particular point in time. If that changes, then we'll make decisions on that."

Michigan State running back LJ Scott came back from an injury last weekend and played for the first time since early September. He was held to 25 yards on 10 carries, but he could be an asset for the Spartans going forward.