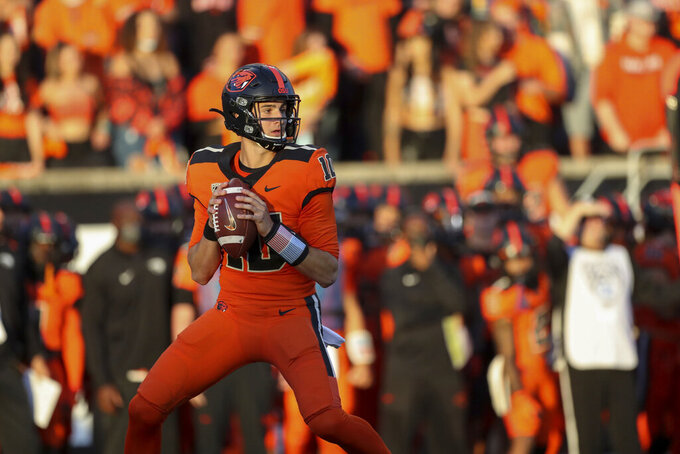 Oregon State quarterback Chance Nolan (10) looks for an open teammate during the first half of an NCAA college football game against Washington on Saturday, Oct. 2, 2021, in Corvallis, Ore. (AP Photo/Amanda Loman)

They head to Washington State this week as the only undefeated team in conference play in the Pac-12 North, the first time the Beavers have ever been in sole possession of the division’s top spot. The Beavers are also riding their first four-game winning streak since 2013.

While the early success this season might be a surprise to some, for the Beavers (4-1, 2-0) it's merely the next step under Smith, who took over in 2018.

Smith inherited a team in disarray after coach Gary Andersen resigned in the midst of the 2017 season. Oregon State went 1-11 overall and 0-9 in conference that year.

Smith's first year was rough, with just two wins. But the Beavers have steadily built on that, topped by back-to-back wins at USC and last week at home against Washington.

“I think we’re a confident group that understands how hard it is to win, and our first two conference games we’ve been able to find a way to win," Smith said. “But we’re very mature and experienced enough to know we got a long ways to go. And each win only sets you up for bigger games as the season goes.”

Oregon State had not won in Los Angeles since 1960 until they beat USC on Sept. 25. The Beavers then snapped a nine-game losing streak against the Huskies last Saturday. It marked the first time Oregon State has won back-to-back games to open conference play since 2013.

After the victory against the Trojans, Smith proclaimed in a postgame celebratory locker room speech: “We ain't done yet.” The phrase has since become something of a mantra for the Beavers.

“I know a lot of attention was gonna go off on the 60 years-type thing," Smith said. "But I just wanted to kind of quickly flip like, yeah, celebrate a win, but we've got way more to us.”

The Beavers lead the league in scoring offense with an average of 36 points a game.

Quarterback Chance Nolan has thrown for nine touchdowns and averages 207.6 passing yards a game. Nolan was among three quarterbacks who battled in preseason camp for the starting job, with Tristan Gebbia and Sam Noyer.

Gebbia, who was the starter last season before he injured his hamstring, is still dealing with the injury. Noyer, a transfer who started at Colorado last year, started the opener against Purdue before Nolan secured the starting nod.

"We’re not gonna be happy with where we are now, we’re going to keep going,” defensive back Alton Julian said. “But I just know from the summer workouts, spring workouts, everybody was focused on winning the games, and then playing a whole 60 minutes. I knew this was gonna happen, we just got to keep going. It’s just the beginning.”

Oregon State heads to Washington State on Saturday. The Cougars (2-3, 1-2) are coming off a 21-6 victory last week at California.

Washington State stumbled in its opener against Utah State and has been plagued by distractions over coach Nick Rolovich's vaccination status. Rolovich was the only Pac-12 coach who couldn't attend the league's annual media day this summer because he was unvaccinated.

But all of that hardly matters to the Beavers at this point. The Cougars are just another opponent to prepare for in the team's pursuit of improvement.

Smith said it's way too early to get too hyped about the season.