Swift eager to show he can be Georgia's No. 1 tailback 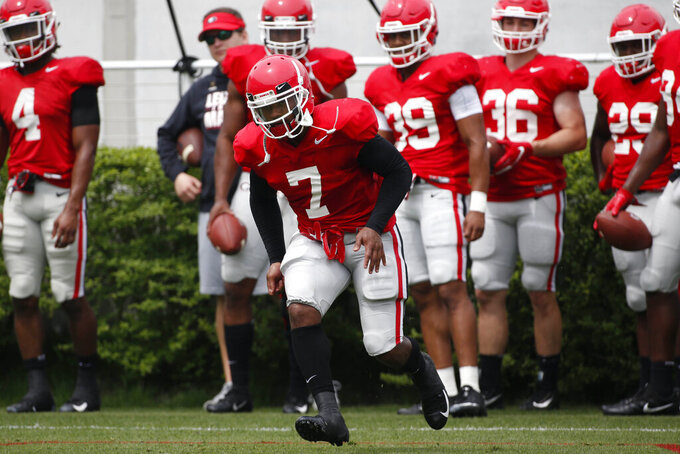 Finally, the junior stands alone atop Georgia's depth chart at tailback. Swift has seized the opportunity this spring.

Georgia coach Kirby Smart said Swift "has set himself apart from the other offensive players because of his demeanor and body language."

Swift's talent as a big-play running back has always been clear, but even so he's had to be patient. At Georgia, known its rich tradition at running back , the depth chart often includes NFL-caliber talent.

In Swift's 2017 freshman season, Georgia's ground game was led by Nick Chubb and Sony Michel. Last season, when Chubb and Michel were enjoying success in the NFL, Swift was the co-leader of the running attack. He was the team's leading rusher, but started only five games as Elijah Holyfield shared the lead role.

Georgia has had two 1,000-yard rushers for two straight seasons — Chubb and Michel in 2017 and Swift and Holyfield in 2018. Entering Saturday's G-Day spring game, it appears this season could be different. There's no obvious candidate to challenge Swift's lead role.

With Holyfield hoping to be selected in next week's NFL draft, there is a clear separation between Swift and his backups, including Brian Herrien, James Cook and Zamir White.

Swift said he expects "great things" when White, a big name in the Bulldogs' top-ranked 2018 freshman class , is cleared following his return from knee surgery . White was held out last season and protected from contact this spring.

Swift, who has the unique distinction of being Georgia's leading returning rusher and receiver, shares the spotlight with quarterback Jake Fromm as the leaders of the offense in 2019. After leading the Bulldogs with 1,049 yards rushing and 10 touchdowns in 2018, Swift could be headed for a very busy season. That suggestion makes him smile.

"I get to show everybody in the country what I really can do with a high workload," Swift said last week. "I'm ready."

Swift ran for 39 yards on only three carries in Georgia's G-Day spring game on Saturday. His 27-yard run was the longest of the day, but the scrimmage — a 22-17 win for the Red team led by Fromm and Swift in front of a crowd of 52,630 — featured the passing game.

"I think we did well," Swift said after the game. "I think we ran the ball well when we did. ... It was good to get the feel for the game again in front of the fans."

Swift (5-foot-9, 215 pounds) says he has logged extra hours in the weight room to prepare as he anticipates additional carries. He has never had more than 17 carries in a game. With his workload carefully managed, he has been extremely productive, averaging almost seven yards per carry for his career.

"He's ready," Fromm said. "... I can't wait to see what he does this fall. I definitely think he's capable of carrying as much load as he wants to carry."

Swift is especially important in 2019 as Georgia must replace many of Fromm's top receivers.

Riley Ridley, Mecole Hardman and tight end Isaac Nauta left early for the NFL draft. That leaves a huge void. Demetris Robertson has earned praise this spring as a breakout candidate at receiver, while Jeremiah Holloman and Tyler Simmons are the most experienced targets for Fromm.

Georgia needs to be able to rely on continued production from Swift when it opens its season at Vanderbilt on Aug. 31.

Swift will be eager for a fresh start after finishing the 2018 season with two first-half fumbles and only 12 yards rushing in Georgia's 28-21 Sugar Bowl loss to Texas .

It was a rare poor showing by Swift, who enjoyed a streak of three straight 100-yard games late in the season. He set career highs in two straight weeks with 156 yards against Kentucky and 186 yards in a win over Auburn .

Swift had 32 catches last year and had three receptions for 17 yards in the G-Day game. He said a bigger role catching passes in new offensive coordinator James Coley's scheme would fit in well with his skills.

"That's big. That's one of the talents God has blessed me with," Swift said. "... I think coach Coley is doing a great job of getting the running backs more involved in the passing game. I think everybody will see that in our offense."