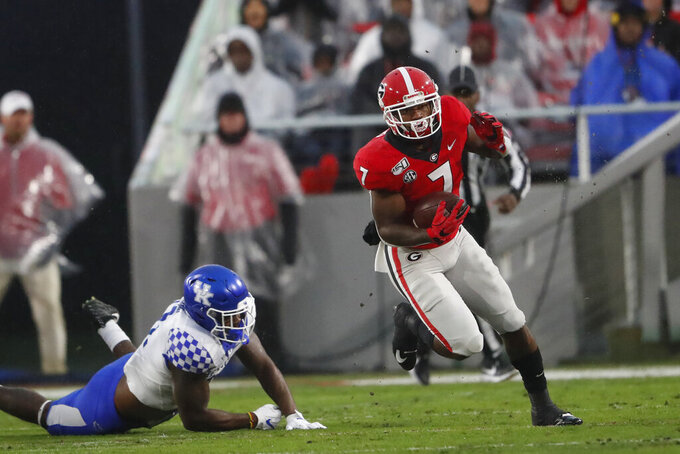 Georgia running back D'Andre Swift (7) breaks away from a Kentucky defender during the first half of an NCAA college football game Saturday, Oct. 19, 2019, in Athens, Ga. (AP Photo/John Bazemore)

ATHENS, Ga. (AP) — D'Andre Swift began the week asking Georgia coaches to get the ball to the team's playmakers in space.

Swift finished the week showing what he can do with those opportunities.

Swift's 39-yard touchdown run in the third quarter snapped a scoreless tie, and No. 10 Georgia overcame a slow start to beat Kentucky 21-0 on Saturday night.

Swift, who ran for 179 yards, added a 3-yard touchdown run in the fourth quarter. Brian Herrien ran for 60 yards, including an 8-yard TD.

Each offense was affected by Nestor, the former tropical storm which dumped rain on Athens throughout the day.

Swift told his teammates at halftime he wanted to take a lead role for the offense after it was clear this was not a night for a productive passing game.

"That's exactly what I told them," Swift said. "I talked at halftime and told them 'Keep doing what you're doing. It's on me. I've got y'all. I've got us.'"

Georgia (6-1, 3-1) recovered from last week's loss to South Carolina by finally taking advantage of its Southeastern Conference-leading ground game in the second half. The Bulldogs ran for 235 yards, including 140 in the second half.

After Georgia was held about 80 yards below its rushing average in the double-overtime loss to South Carolina, Swift called for more creative calls. He then averaged 8.5 yards on 21 carries.

The win sets the stage for a top-10 SEC East showdown against Florida in two weeks.

The wet conditions contributed to the scoreless first half.

"You have to be patient with those type of elements," Georgia coach Kirby Smart said. "You're not just going to run the ball down their throats or throw it 30 to 40 times in those conditions."

On the soggy Dooley Field at Sanford Stadium, Kentucky stayed right with Georgia until midway through the third quarter.

Kentucky (3-4, 1-4) got 99 yards rushing from Lynn Bowden in his second start at quarterback, but the Wildcats' attack was one-dimensional. Bowden, Kentucky's third starting quarterback of the season, didn't complete a pass on his first nine attempts. He completed only 2 of 15 passes for 17 yards.

Bowden's 17 carries were not enough to offset Swift's big night. Kentucky coach Mark Stoops said he hopes this is the last time he has to face Swift, a junior.

"I just gave him a 'Congratulations' after the game and wished him 'Goodbye,' because he needs to go to the NFL," Stoops said. "He's an elite player."

Georgia's Jake Fromm did not have a turnover one week after throwing three interceptions and losing a fumble. He completed 9 of 12 passes for only 35 yards.

The Bulldogs grabbed control by taking advantage of two mistakes by the Wildcats.

A poor punt by Max Duffy went out of bounds at the Kentucky 39 early in the second half after carrying only 15 yards.

"I just shanked it," Duffy said. "It was just one of those things that I would like to take back and do over perfect."

The punt allowed Georgia to start a possession outside of its 20 for the first time in the game. Swift needed only one play to take advantage of the excellent field position.

Bowden lost a fumble, caused by J.R. Reed, on the Wildcats' next possession. The ball was recovered by Georgia's Richard LeCounte at the Kentucky 31. Herrien's scoring run on his fourth straight carry pushed the Georgia lead to 14-0.

Kentucky: The Wildcats clearly have a unique talent in Bowden, who was the team's leading receiver before last week's move to quarterback. Still, more work is needed to add balance to the offense. Bowden led the Wildcats to a 24-20 win over Arkansas last week in his debut at quarterback, but now opposing teams will be better prepared for his frequent runs.

Georgia: The Bulldogs showed good poise in recovering from the ugly first half and capitalizing on opportunities in the third quarter. Still, the offense failed to produce like a unit capable of contending for a championship. The receivers again struggled to beat press coverage and the line failed to push back Kentucky's defensive front on a failed fourth-down sneak by Fromm.

Georgia's second-half recovery should save it from another drop in the Top 25.

Georgia held Kentucky to 52 yards in the first half and 177 yards overall in its second shutout of the season.

Some Georgia fans were impatient, booing conservative play calls throughout the game.

"It had no effect on me," Smart said. "I've got headphones on. We're trying to make the best decisions to give us the best chance to win."

Georgia: Following an off week, Georgia will look for its third straight win over No. 9 Florida on Nov. 2 in Jacksonville, Florida. The Bulldogs won last year's matchup of top-10 teams, 36-17.