Syracuse aims to get back on track vs Western Michigan 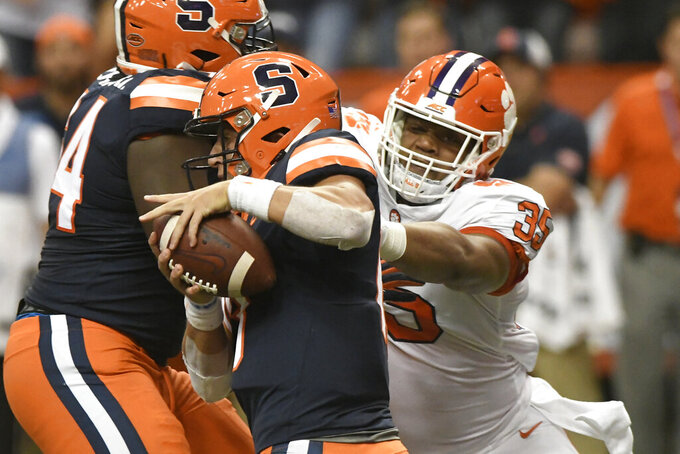 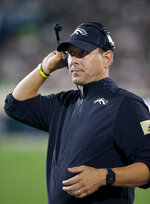 There's usually no looking back in football, but for Syracuse a second straight lopsided loss can tend to linger, especially because the opponent was top-ranked Clemson.

"We put it behind us, but it's something that's always going to be there," Orange sophomore defensive back Trill Williams said. "We just don't ever want to feel like that again."

Coming off a 41-6 loss to the Tigers last Saturday night, Syracuse (1-2) will try to regroup when it hosts Western Michigan (2-1) on Saturday.

This is the second straight matchup between the schools, and the Broncos threw a scare into the Orange a year ago, scoring three straight touchdowns to open the third quarter before eventually losing 55-42.

That alone gives them confidence for this one.

"I think playing last year helped," said Broncos coach Tim Lester, a former Syracuse assistant. "We've faced a lot of these guys before and we know that although it's going to be really difficult to move the ball and really difficult to slow down that offense, we know we've done it before."

Ranked in the preseason, Syracuse is anxious to get its season turned around. The defense, which coach Dino Babers was counting on to be a difference-maker, gave up 104 points in the two losses, and the up-tempo offense under new quarterback Tommy DeVito has been inconsistent. He was sacked eight times and forced to hurry his throws seven other times by the swarming Clemson defense.

"It's just a lot of growing, trying to get better every game," said DeVito, 60 of 101 for 678 yards and three TDs with four interceptions on the season. "It can go downhill in a hurry. We've got to keep climbing up that mountain."

For Lester, a record-setting quarterback in college for the Broncos, the game plan is simple.

"We've got to get after him if we can, try to put people in his face cause he's had people in his face," Lester said of DeVito. "That's an explosive offense and they haven't really got in rhythm yet. We have to keep them out of rhythm because we know what they can do when they get in rhythm."

Other things to know when Syracuse hosts Western Michigan on Saturday:

Western Michigan defeated Georgia State 57-10 last week , netting 694 yards of total offense while the defense allowed just 38 yards in the second half, a good tuneup for the Orange.

"The opponent that we're playing, they proved last year they're capable of scoring points and they can get us into a shootout," Babers said. "They're not afraid of us."

The Broncos lead the Mid-American Conference and rank eighth in the country in kickoff return average at 33.78 yards per run-back. Graduate transfer Keith Mixon Jr. leads the way with a 38.28-yard average per return, fifth nationally. He also tops the country with four kickoff returns of 30 or more yards and three of 40 or more yards.

Mixon will try to work his magic against the Orange's Sterling Hofrichter, a tall task. Hofrichter earned national punter of the week honors and was voted ACC specialist of the week after punting a career-high nine times against Clemson for 470 yards. His average of 52.2 yards per kick was the best mark in team history for a player with more than five punts, and six of the kicks traveled at least 50 yards. More importantly, he averaged 51.9 net yards per kick — only two punts were returned for a total of 3 yards.

Western Michigan tailback LeVante Bellamy rushed for 192 yards against Georgia State, leading a ground game that finished with 450 yards and a school-record seven TDs. Bellamy, who leads the MAC with 96.3 yards rushing per game, had scoring runs of 60, 36 and 73 yards. His previous high was two touchdowns against Syracuse last season, when he rushed for 120 yards.

When teams win big like the Broncos did a week ago, the word momentum gets bandied about. It's not in Bellamy's football vocabulary.

"I don't really believe in momentum. I just feel as if you take every week as its own week," Bellamy said. "You can be happy about the last game, but you should never dwell on the last game.

"I have another goal I want to achieve, and that's to beat Syracuse. I feel like if we dwell on Georgia State we're going to lose to Syracuse, but if we focus on Syracuse and we lock in, then I think it'll be a great matchup."