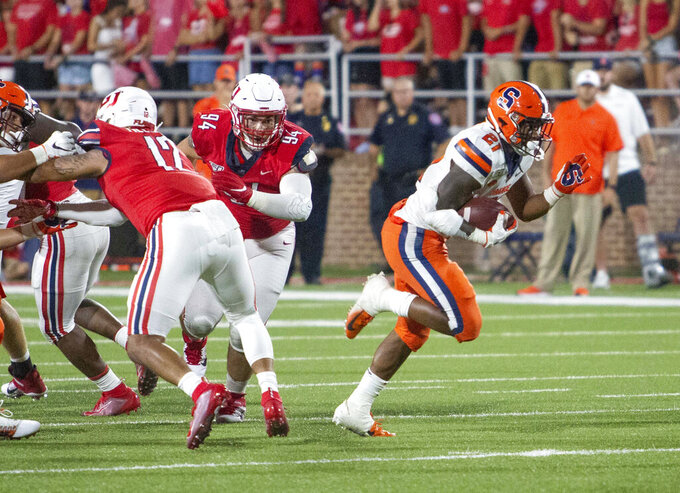 Syracuse running back Moe Neal breaks free to score a touchdown during the second half against Liberty in an NCAA college football game in Lynchburg, Va. Saturday, Aug. 31, 2019. (AP Photo/Matt Bell) 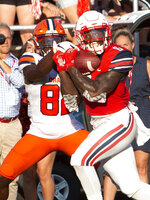 Syracuse coach Dino Babers knew what he had before the season started — a stout defense and a quarterback who's going to have to learn on the job.

All it took was one game to prove it.

The Syracuse defense, which registered 31 turnovers last season, the most of any Power Five team, notched four takeaways in a 24-0 victory at Liberty on Saturday night, the Orange's first shutout in a true road game since 1991. That moved Syracuse up a notch to No. 21 in this week's AP Top 25 as the Orange began preparing for a second straight outing on the road — against Big Ten foe Maryland (1-0) on Saturday.

"I think the biggest difference between good defenses and bad defenses is how the back end tackles," Babers said Monday during his weekly news conference. "You can normally get enough tough guys in the front seven, but if you get some tough guys in the back four, then you've got a real defense."

Andre Cisco, who led the nation last year as a freshman with seven interceptions, and Ifeatu Melifonwu each had an interception to pace the secondary, while redshirt junior nose tackle Josh Black had four tackles, including a personal-best two sacks, and recovered a fumble, a performance that earned him Atlantic Coast Conference defensive lineman of the week honors. Overall, the defense had eight sacks among its 14 tackles for a loss of 51 total yards and held Liberty to minus-4 yards rushing in 34 attempts.

The coach was duly impressed by the latter.

"That's a big, big feather, and that's why I used the word great," Babers said. "The defense did a great job."

The offense? OK at best.

Redshirt sophomore Tommy DeVito completed 17 of 35 passes for 176 yards and two interceptions in his first game as a starter. He also was sacked twice and rushed for 21 yards on six carries. Babers attributed instances of apparent miscommunication between DeVito and his receiving corps to injuries during preseason camp to receivers Trishton Jackson, Taj Harris and Nykeim Johnson that forced them to miss time.

"We didn't play our best football," DeVito said. "Every week going forward we're going to get better. I've definitely got to take care of the ball, especially in the red-zone situations. We're going to learn from it and move forward."

Brimming with confidence after accumulating more practice experience than most newcomers and twice rescuing the Orange last season in relief of former starter Eric Dungey, DeVito showed off his strong right arm late in the first quarter with an ill-advised bomb from near midfield on fourth down that was intercepted near the goal line. The other pick came on a pass to the back corner of the end zone just before halftime that was tipped at the line.

Syracuse also had a lost fumble by Sean Riley on a punt return early in the game, but special teams remain a strong point. Andre Szmyt, picked as the best placekicker in the nation last season, converted a 45-yard field goal, his only attempt of the game, and made every extra point. Sterling Hofrichter averaged 49.2 yards on six punts, placing four inside the Liberty 20-yard line.

"I'm fired up about our defense," Babers said. "If someone's going to tell me I'm going to have a nice defense and really nice special teams and the thing that had to get better was offense, I'll play those cards."