Syracuse in familiar role - underdog on the road at Ohio 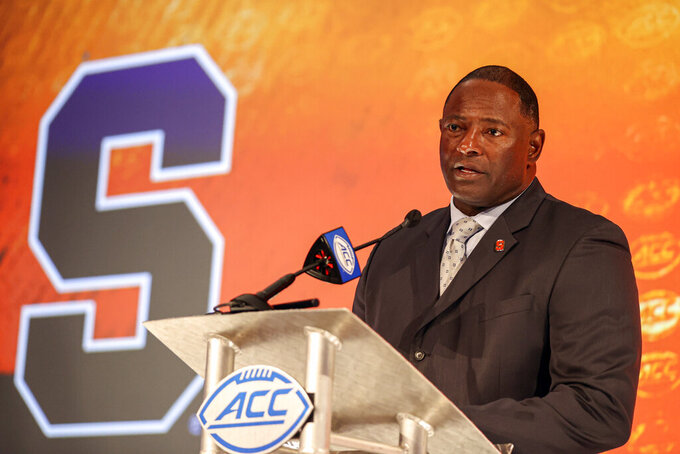 ATHENS, Ohio (AP) — Syracuse coach Dino Babers acknowledges he doesn't sleep much during the season and grabs naps whenever and wherever he can. Lots on his mind these days.

After an injury-plagued season that featured too many losses — 10 in 11 games — the pressure is on, with not much margin for error as Babers begins his sixth season at the helm.

The opener is Saturday night at Ohio of the Mid-American Conference. Even though the Bobcats played just three games last season (they went 2-1) and have a new coach, they're listed as slight favorites at Peden Stadium, according to FanDuel Sportsbook.

“A difficult opponent. More difficult than most likely you would want," Babers said. "It’s a fine crew with a great culture down there, and you’re playing at their place, which makes it difficult. So I understand why we are stuck in the situation that we are.”

Redshirt senior defensive end Josh Black is all too familiar with that.

“It's not news to us. We're predicted every game to lose," Black said. "That's just stuck with me. We're tired of that feeling, tired of people counting us out. It's time for us to go. We know what we're capable of.”

Ohio coach Frank Solich abruptly stepped down in mid-July after 16 years to focus on his health. The Bobcats aren't expected to skip a beat because longtime assistant Tim Albin signed a four-year deal to succeed Solich. He joined the staff as offensive coordinator in 2005, reuniting with Solich after four seasons together at Nebraska.

Albin's first home game as head coach is at night against an Atlantic Coast Conference foe. It's a scenario similar to the one Solich faced in his Ohio home debut. The Bobcats beat Pittsburgh 16-10 in overtime in September 2005 before the Panthers joined the ACC.

“No pressure, right?" Albin joked. "I remember the game well. I expect more excitement from the fans.

Both teams are expected to use two quarterbacks and each has a dual-threat one.

Two-year starter Tommy DeVito is listed first on the Syracuse depth chart. He missed the final seven games last season with a foot injury. Babers said he also plans to use Mississippi State transfer Garrett Shrader. The 6-foot-4, 230-pound Shrader passed for 1,000 yards and rushed for 500 as a freshman in 2019.

Albin has redshirt sophomore Kurtis Rourke, who started all three games a year ago and is one of seven team captains. The Bobcats also have redshirt senior Armani Rogers, a 6-5 transfer from UNLV who started 18 games for the Rebels. Rogers has rushed for 1,663 yards and 20 touchdowns on 308 attempts.

“Leadership-wise, they’ve done a great job on and off the field,” Albin said. “I’m excited about seeing both play.”

Redshirt senior TB De’Montre Tuggle adds a force on the ground for Ohio. He averaged 134.3 yards per game rushing and 7.6 yards per carry last season and scored six of the team’s eight TDs.

Babers coached two seasons in the MAC at Bowling Green before taking over at Syracuse and has an idea what to expect from the Bobcats.

“Ohio will play this like a bowl game,” Babers said. “That would be my approach to it. It could be a huge win, a huge feather for the start of coach Albin and his program. I’d imagine if they get an opportunity to take some chances, they’ll take those chances for the win.”

Ohio is picked to finish second in the MAC’s East Division.

“Every time he touches the ball it’s like it’s his last carry," Babers said.

Syracuse has a 98% vaccination rate. University policy required students, faculty and staff to be vaccinated before the start of the semester. Only those with religious or medical exemptions are excluded. Albin said 104 of 119 players have had one shot.