Syracuse has lingering injuries as it prepares for NC State 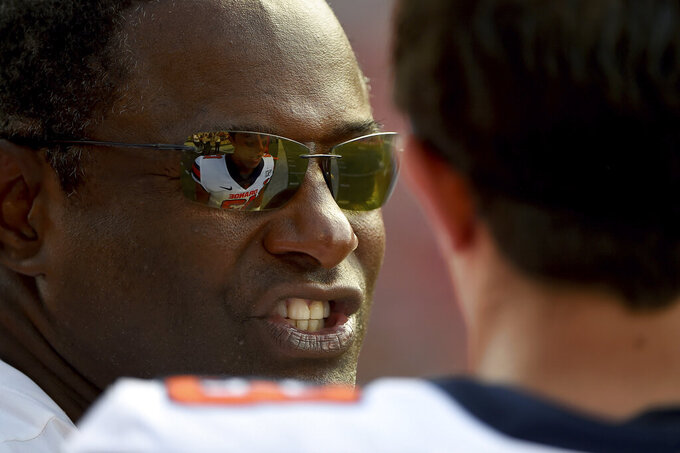 FILE - In this Sept. 7, 2019, file photo, Syracuse head coach Dino Babers speaks with quarterback Tommy DeVito (13) during the second half of an NCAA college football game against Maryland, in College Park, Md. After a bye week, Syracuse coach Dino Babers gets back to work with a Thursday night game on the immediate horizon. (AP Photo/Will Newton, File)

As Syracuse prepares for its third road game of the season, significant injuries linger despite a bye week.

"No change on injuries at all. That happens in football," coach Dino Babers said Monday. "We need to play with the guys that are capable. The next-man-up attitude is the attitude we're going to have."

That means safety Andre Cisco, defensive back Ifeatu Melifonwu, defensive lineman McKinley Williams and center Sam Heckel likely won't be in the lineup Thursday night when the Orange (3-2, 0-1 Atlantic Coast Conference) play at North Carolina State (3-2, 0-1). Cisco and Melifonwu are both sophomores and missed the previous two games, Williams, a senior, has not played this season since hurting a foot in preseason camp and Heckel, a redshirt junior, has an upper body injury and hasn't played since the season opener.

"I wouldn't bet on those guys playing. I think it's going to stay the same," Babers said. "We're getting hit in some areas that are really affecting our football team. This is where coaches need to adapt, where players need to step up."

Syracuse went into its bye week following a 41-3 victory over Football Championship Subdivision foe Holy Cross, a game Babers inserted several new faces into to gauge talent as midseason nears. Among those who made their debuts were six freshmen: tight end Luke Benson, who had a 70-yard, catch-and-run for a touchdown; WR Courtney Jackson; RB Jawhar Jordan; DL Drew Tuazama; and DBs Aman Greenwood and Adrian Cole. Jordan lost a fumble after being gang-tackled in the fourth quarter and Tuazama was called for targeting the quarterback.

"We're trying to see if there's somebody ... who needs to have more repetitions in the game to see if they can help us this year," Babers said. "We're going to have a lot of information to make decisions. After that sixth game we're going to make some calls. Hopefully, we'll finish on the right note and we'll have an opportunity to play 13 games."

Quarterback Tommy DeVito, a redshirt sophomore in his first season as the starter, left the Holy Cross game in the fourth quarter with an upper body injury after throwing an interception. Babers deflected questions about why DeVito was playing that late in a lopsided game.

"He's our starting quarterback," Babers said. "When we're out there trying to win a football game, we're going to play our best players. When the game is out of hand ... all the players are important and get in and out of the game based on that."

Syracuse is averaging 28.6 points and 385.8 yards per game while allowing 28 points and 438.2 yards, and it has scored only 10 touchdowns on 19 trips into the red zone. And the torrid pace at which Babers likes to operate is down so far with a new quarterback at the helm — the Orange are averaging 74.4 plays per game, only once reaching 80. They averaged 81.8 in 2018 with senior Eric Dungey at the helm.

"I think that the past two or three weeks as far as the tempo, you can tell it's gotten a lot faster. It can only get better moving forward," said DeVito, who is practicing and expects to start. "We've had some ups and downs, but ultimately we're getting better at the little things. That's all you can ask for."