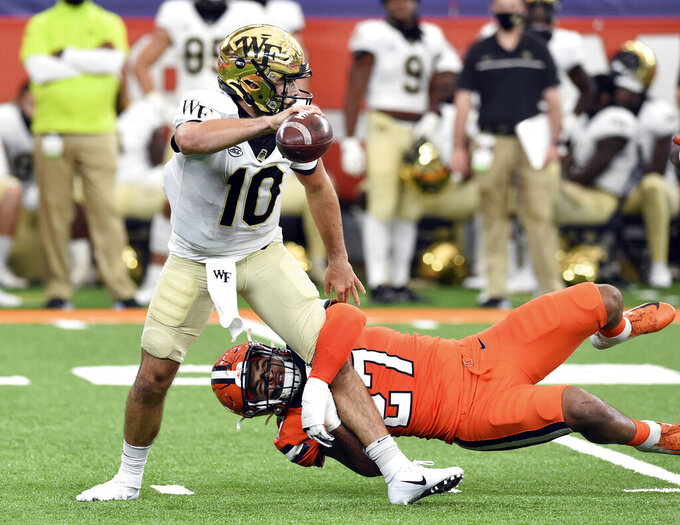 Syracuse is slogging through a down season with only one win and four games left, and coach Dino Babers is already thinking about next year — it's all about evaluating now.

“We’re going to go out, try to win football games and whatever happens after that happens,” Babers said.

Syracuse (1-6, 1-5 Atlantic Coast Conference) has lost four straight since beating Georgia Tech, and three have come in the Carrier Dome as the Orange prepare to host Boston College (4-3, 3-3) on Saturday. The longtime rivals have something in common — hard-fought losses at top-ranked Clemson the previous two weeks.

“I think every day it’s just about going out and getting better,” Orange tailback Cooper Lutz said. “What we’re playing for is to win. Nobody wants to go out there and ... lose the game before it even starts."

In Syracuse's 38-14 loss last week to Wake Forest, redshirt senior quarterback Rex Culpepper struggled in his third start since replacing injured Tommy DeVito. Culpepper completed 15 of 27 passes for just 85 yards and a touchdown with two interceptions before being replaced by freshman JaCobian Morgan in the fourth quarter. Morgan responded by hitting all seven of his throws for 57 yards and his first career touchdown.

If Babers is contemplating a quarterback change, he isn't letting on.

“We’re going to put the best guy out there that gives us an opportunity to win," Babers said. "It’s just one of those situations where you’ve got to continue to evaluate to see exactly where they’re at and at the same time not giving away too much information to opponents.”

The Orange offense could use a jolt. It’s averaging just 19 points and only once has scored more than two touchdowns in a conference game. And now the defense has lost standout junior defensive back Trill Williams, who at mid-week joined injured safety Andre Cisco in opting out of the rest of the season.

“If you look at his team this year, the quarterback injury, the safety getting an injury, a couple guys opting out, etc. It’s a hard year, it’s a really hard year,” BC coach Jeff Hafley said.

BC sophomore wide receiver Zay Flowers and redshirt sophomore quarterback Phil Jurkovec are clicking well together. Flowers ranks third in the ACC with 536 receiving yards and third in receiving touchdowns (5). Jurkovec, a transfer from Notre Dame, leads the ACC with 1,875 passing yards and his 14 passing touchdowns rank third in the conference. He's also run for three scores.

“We’re going to have to run the ball well," said Jurkovec, who threw for 204 yards and two touchdowns in a six-point loss last week at Clemson. "I feel confident in it and I like how I’m coming along in the run game, being able to make some of those reads and make the defense respect my running.”

Eagles redshirt junior linebacker Isaiah McDuffie had 10 tackles against Clemson to boost his season total to 69. That’s tied for second in the nation and the ACC lead with teammate Max Richardson. McDuffie also leads the conference and is tied for third in the nation in solo tackles (40).

NOT SO LOUD HOUSE

The Carrier Dome is nicknamed “The Loud House” but with no fans allowed at games this season it's been anything but loud. Syracuse defensive back Ifeatu Melifonwu doesn't think the lack of fans has had an effect on the Orange.

“I don’t think it’s impacted anything, but I feel like you can definitely feel the difference, especially on third down and turnovers," Melifonwu said. "Usually, on third down it’s like you can’t hear anything, and I feel like that makes guys lock in, makes us know we need a stop and everything, but I don’t think it affects too much. It probably would affect them (the opposing offense) more than it would affect us.”

The Orange are fourth in the ACC in red zone efficiency on defense, allowing points on 78.1% (25 of 32) of their opponents’ trips inside the 20-yard line. Syracuse also has forced four turnovers inside the red zone, which leads the conference. BC has scored 16 TDs in 29 trips inside the 20.