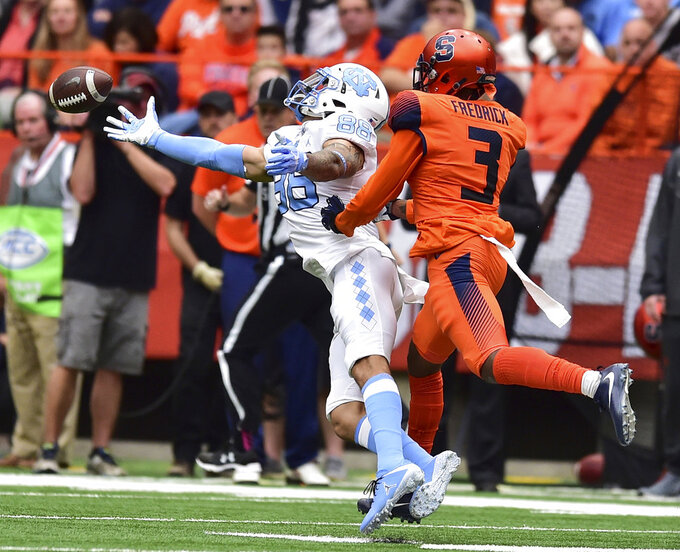 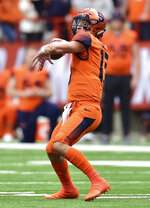 SYRACUSE, N.Y. (AP) — Coach Dino Babers goes into one of Syracuse's most important games of the season with a big secret — who will start at quarterback.

Will it be senior Eric Dungey or redshirt freshman Tommy DeVito to face No. 22 North Carolina State (5-1, 2-1 Atlantic Coast Conference) on Saturday night in the Carrier Dome? Both teams are one victory shy of qualifying to play in the postseason and it's a big deal for the Orange (5-2, 2-2), who haven't played in a bowl game in five years.

"I think that everyone internally doesn't have to necessarily know what the plan is for Saturday," Babers said. "But I think the major guys that it involved the most, I think they have an understanding how it's going to be."

Dungey, a four-year starter and impressive dual threat, is the acknowledged leader of the team and has started every game of his final season. But last week, after leading Syracuse to a 20-7 lead over North Carolina early in the third quarter, the Orange offense stalled and the Tar Heels rallied to take a 7-point lead early in the fourth.

With just over 5 minutes left in regulation, Babers acted on a hunch and sent in DeVito, and he responded by throwing for 181 yards and three touchdowns in a 40-37 double-overtime triumph that kept the Orange undefeated at home and on track to attain bowl eligibility.

"We've got two guys that we're confident in," Syracuse defensive end Kendall Coleman said. "It's been good to see that. As a team, I feel like everybody's united and excited."

There's no reason to think that Dungey won't start again, but DeVito has demonstrated the Orange have two players at the position capable of leading. DeVito also sparkled in relief of an injured Dungey in a 30-7 win over Florida State. The Orange rank ninth nationally in scoring at 42.6 points a game.

"What I've seen, he's very impressive," North Carolina State coach Dave Doeren said of DeVito. "He's gone in games in pressure situations and won a huge game last week for them. He understands how to run their offense. He's different from Dungey in the fact he's not running around as much, but he can throw it. He's got good timing. He's a very confident young man."

Other things to know when North Carolina State visits Syracuse on Saturday night:

North Carolina State is coming off its first loss of the season, a 41-7 thrashing on the road at No. 2 Clemson. That dashed any hope of vying for the Atlantic Division title, but there's a top bowl game to chase.

"As much as we wanted to win that football game, we didn't play well enough to win and they did," Doeren said. "And everybody has to own that and move on. We can't let it beat us again."

N.C. State quarterback Ryan Finley is well-protected — the Wolfpack have only allowed three sacks — and that has helped Finley to a stellar season. He's 151-of-221 passing with 10 TDs and leads the ACC at 296.2 yards passing per game and completion percentage (68.6). The Wolfpack also have converted 20 of 40 third downs in conference play, the top mark.

"We know the talent they bring to the table. It's going to be a challenge," said Coleman, who has seven of the Orange's 21 sacks. "If each player can focus on doing their one-eleventh on the field, I think just like a puzzle piece — we'll execute and leave with a win."

Syracuse starting defensive backs Chris Fredrick and Scoop Bradshaw are nursing injuries, and with Finley under center for the Wolfpack their presence will be missed if they can't play.

"We haven't had a no that they are not going to be in the game," Babers said. "Obviously, they are banged-up a little bit. We're just going to have to wait and see how they feel at the end of the week."

Dungey and Finley are nearing 10,000 total yards of offense for their careers. Dungey, who's averaging 273.8 yards per game, has 9,621 career yards, while Finley has 8,668 and leads the ACC with 300.5 yards per game. Only seven players in conference history have reached the 10,000-yard mark and three have come in the past three seasons — North Carolina's Marquise Williams in 2015, Clemson's DeShaun Watson in 2016 and Louisville's Lamar Jackson last year.

HOME AWAY FROM HOME

N.C. State is 10-1 against the Orange and half the victories have been in Syracuse. The Orange's lone win in the series was on the road, 24-10 in 2013, Doeren's first year as head coach.